Hero stories! There are literally thousands of hero stories dealing with Catholic heroes. Some of them are of famous historical heroes, such as Rodrigo Diaz, better known by his honorary title of El Cid. The story of his life was so incredible that it spawned several epic stories that are more like romantic tales. Men like Charlemagne, or William Wallace, better known in our day as Braveheart, are two other examples of historical heroes who were Catholic. There are also women heroes, like St. Joan of Arc, and they all lived exciting lives of adventure, and changed the world in which we live.

All of these characters were real life heroes, and this page will be the link to their stories. There are any number of epic heroes who may be unknown to you, such as King Pelayo of the Austurias, or King Alfonso VIII of Castile. Their stories are fascinating, and all of these characters were inspired by their faith in God and supported by the graces and sacraments of the Catholic Church.

Perhaps your child, grandchild, or God-children, will read these stories, become inspired, and one day also be remembered as an epic hero for Christ. 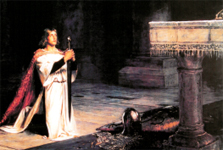 We only have one life to live, and it is good to consider what God's will is for us. We know that the man who serves himself is little more than a slave to his own passions, and that whatever his deeds, they are of no benefit to him. On the other hand, the man who serves God accomplishes his own salvation, and participates in something much greater than himself, and the actions of his life have lasting value!

We must keep our eyes on heaven, and do our duty diligently. One day we will have finished our race, and if we are successful, we shall be happy throughout all the ages of eternity. We must take the opportunity now, while we live, to struggle heroically against our enemies - the world, the flesh, and the devil, to achieve the reward we seek.

Let us therefore strive to accomplish great things for Christ!

Roy Benavidez - Medal of Honor recipient for actions under fire during the Vietnam War.

Bohemond - Bohemond, prince of Taranto, hero of the First Crusade!

Dieudonne de Gozon, Knight of St. John - A true hero story of a battle between a bold knight and two dragons!

Charlemagne - His rule was like a beacon shining out of the dark ages lighting the way to the great triumphs of the thirteenth century!

Alonso Perez de Guzman - An amazing story of personal sacrifice for the sake of honor.

Queen Isabella of Spain - The Catholic Queen who conquered Grenada to complete the nearly 800 year Reconquista of Spain!

Saint Joan of Arc - The peasant girl God raised up to save her homeland of France.

Father Emil Kapaun - In a very definite sense, we are all beneficiaries from the life of Fr. Kapaun. He has left us a stirring example of devotion to duty.

Charles Martel - Known as "The Hammer," he saved Christendom from Islamic invasion at the Battle of Tours.

Sergeant Michael Moynihan - A Catholic soldier recently awarded the Silver Star for his gallantry in action against the Taliban fighters in Afghanistan!

Saint Olav -The Norse gods were no match for him!

Pelayo, King of the Austurias - A true story of how one man's faith and determination saved Spain!

Skanderbeg - Iskander, The Dragon of Albania 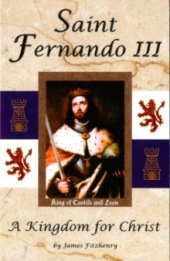