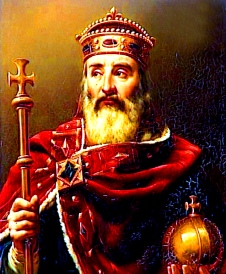 Charlemagne - The King Who Fought off the Dark

Imagine if everything fell apart – the towns and the shops, the water and the lights, the schools and the churches.  Imagine people getting along as well as they could among the ruins, fighting a lot and growing more and more ignorant and superstitious.  Then imagine you were in a position to put it all back together.  What would you do?  Where would you start?  Well that is what really happened after the fall of Rome – until finally a king came along who was willing to roll up his sleeves and get to work.

His name was Karl and he was a Frank, one of the race of people for whom France was named, but that was a long time later.  When Karl – later known as Charlemagne – lived, there was no such thing as France or any other country in Europe.  There were only a lot of kingdoms and duchies.

King Karl was a tall man, big and strong, almost always dressed in the simple jerkin and leggings, which were the ordinary clothes of a man of his time.  It was a real fight to get him dressed up like a king and it didn’t happen very often – he was too busy.  But he was easy enough to recognize even without fancy clothes, with his large, piercing eyes, pale hair, long nose -- and energy enough for ten ordinary men!

About three hundred years before he was born, the Roman Empire of the west was overrun by tribes of barbarians and, over the years, the things the Romans had built fell into ruin.  This time was called the Dark Ages because people were so busy fighting off enemies and trying to keep alive that they had no time for much of anything else.

It was when things were just about as bad as they could get that King Karl, who later became the Holy Roman Emperor, decided to do something about the situation.  Actually, he was not born a prince and his father was not born a king.  They were of the family of Mayors of the Palace, who were the people who ran things for the lawful Frankish kings.  Way back in 732, Charles the Hammer, who was one of the Mayors, drove the invading Moors back into Spain.  Later, his son Pepin the Short was made king when the royal family – who were known as the Merovingians and never did anything much -- were asked by the pope to retire.

Karl was only about ten years old when his father, Pepin the Short, was crowned king of the Franks.  When Pepin died, Karl and his brother were expected to rule together, but that didn’t work out very well.  After his brother died, King Karl finally got busy.  For one thing, he ended up fighting over sixty major battles to protect his kingdom and to make it larger.  During his 47 years’ reign, there was trouble from just about every direction.  Slavs, Avars, Moors, Vikings, Saxons – he had to defeat them all.

The first time King Karl actually saw Rome was during a campaign against the Lombards of Italy.  After that, he was often called on to defend the pope and he never let the Holy Father down. He loved the Holy City and especially the basilica of St. Peter.  He was always sending gold to decorate his favorite church.

In the year 800 on Christmas Day, the pope crowned Charlemagne as the Holy Roman Emperor.  What this meant was that he wasn’t just the king of the Franks anymore, but the protector or all the Christians in the west.  It was a big job and he took it very seriously.

The emperor knew very well that a lot of things had been lost when the Roman Empire fell apart.  Even though he was not very well educated himself, he was determined to do everything he could to build them back.  He began with the education of his own children – and he had quite a few – by setting up a school at Aachen, which was where he lived when he was not leading his armies in the field.

To make sure everyone learned as much as they could – including himself – he persuaded a number of wise men and scholars to come to his court.  The best among these was a man named Alcuin who came from England where a lot of classical learning had been preserved.  The school taught all sorts of things such as grammar, languages, writing, mathematics and religion.  When the emperor had time, he sat in on classes.  He could read and speak Latin and understand Greek, but hard as he tried, he never did learn how to write.

Charlemagne wasn’t about to keep all this learning just for his family, however.  He set up schools all over his realm, teaching boys and girls to read and also training priests.  Like the rest of society, the Church had suffered a lot over the past few centuries and many of the clergy were quite ignorant.  Even the Vulgate Bible was not always copied accurately and correcting the copies in the different churches was quite a job.  But the emperor ordered it to be done and while he was at it, he made sure the bishops frequently visited all the churches in their dioceses, preaching sermons and overseeing the priests.

Another project the emperor took on was to have all the laws written down.  The different nationalities in the empire each had their own way of doing things and there was no reason to interfere if they didn’t make trouble for the rest of the realm, but the laws were certainly in a muddle.  Often he asked advice from the bishops on new laws and saw that they were added to the old ones.

There was really no end of work for the emperor as he built churches and Cathedrals – especially the one at Aachen – and repaired hundreds of others all over Europe.  He built a great bridge over the Rhine River at Mainz – though it burned down later because it was made of wood.  He built fleets of boats – one in the north to fight off the Danes and another in the south to fight the Moors.

Then there was farming.  He did everything he could to help the farmers so that there would be enough food for everybody.  He encouraged trade and tried to make it safe for people to travel from one place to another.

When Charlemagne died of a fever at the age of 72, one of his sons, Louis the Pious, became emperor after him.  The new emperor managed to keep the light of civilization going until the middle of the 800’s when, once more, things began to fall apart.  It is rare that such unusual ability and energy are combined with such great and devotion to the Church as they were in Charlemagne.  There was so much still to do that his successors just couldn’t keep up.

So, for another couple centuries, times were hard again.  But slowly good kings began to rise once more, and pagan tribes were converted – and Charlemagne was not forgotten.  Though he has not been officially canonized, many people thought he was a saint and prayed to him for help.  There is no denying that Charlemagne’s rule was like a beacon shining out of the dark ages lighting the way to the great triumphs of the thirteenth century when the most famous Cathedrals were built and universities were founded, when St. Thomas wrote the Summa and St. Francis and St. Dominic each founded one of the two most famous religious orders.

From having to fight for its very existence, Christendom was able to turn outward in the Crusades and a couple centuries later, to discover the New World.  It is hard to measure how much of this we owe to the inspiration of the Emperor Charlemagne, but he has been the hero of more than one ruler in later times.

In the year 1000, Emperor Otto III actually entered Charlemagne’s tomb at Aachen.  He found that the emperor had been buried sitting up on a marble throne, wearing a crown and robe.  The body was quite well preserved.  According to some accounts, he had the book of the Gospels open on his knees, but others say he was holding a scepter and a sword.  I’m sure any one of these things would have been right for him – or all three.

The important thing is that we remember him – the man who worked so hard to put Christendom back together for the greater glory of God.  Even ordinary people can work for that!