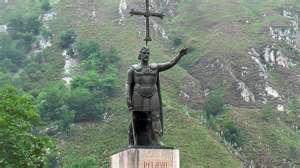 There are many tales in history that illustrate for modern man how men once conducted themselves according to the Medieval Code of Chivalry. Here is a story of Pelayo, a story of remarkable courage, encompassing elements of chivalry and knighthood, that is not much remembered in our own day. It is the story of how one man’s faith and determination saved Spain.

Pelayo was not born the son of a king, though there were Visigothic kings with whom he was distantly related. When the Moslems invaded Spain in the year 711, he rode with the army of the Catholic King Roderick to defend his homeland. When the Visigoths were defeated, Pelayo returned to the mountains of Asturias.

Pelayo was sent to Cordoba by Munuza, the Moslem governor of the Asturias. As he was being led to the Muslim capitol, Pelayo became overwhelmed with rage when he learned that his beautiful sister had been abducted during his absence and added to Munuza’s harem.

It was too much. At the first opportunity, Pelayo risked everything and escaped. If he were found in this suddenly hostile and foreign land, he would be slain. Somehow he avoided the search parties that were sent to recapture him, and after many dangerous and harrowing adventures, managed to complete his escape.

There were others who were inspired by his resistance, and Pelayo soon found himself with a small army of three hundred men. They lived together as free men in the Cantabrian Mountains, and Pelayo was made their chief. His was a tiny kingdom that extended for only ten miles in any direction, but it was a summit that stood clear above the tide that had submerged the rest of Spain. His defiance of Moslem rule must have seemed almost futile and insignificant, but the Moslems eventually learned of it and sent a large army to crush the Christian resistance.

It was the spring of the year 722, a little over ten years before Charles Martel’s unforgettable stand at Tours, when the Moslems finally appeared in the valley to dislodge Pelayo from his lofty peak. Thousands upon thousands of Moslem warriors scaled the steep slopes toward the cave in which Pelayo awaited them.

With the Moslem army, or Moors, as they were known in Spain, was a Catholic bishop who was apparently unworthy of his high office. He was sent ahead to try and convince Pelayo to give up rather than fight. The details of their conversation were remembered and recorded as follows:

Pelayo was on Mount Auseva with his people, and the army arrived and pitched their innumerable tents at the entrance of the cave. Upon a mound facing the holy cave, Bishop Oppas spoke: “Pelayo, Pelayo, where are you?”

Whereupon Pelayo, from an opening in the cliff, responded: “Here I am.”

The bishop continued: “I believe that you understand how the entire army of the Goths cannot resist the force of the Moslems; how then can you resist on this mountain? Listen to my advice: abandon your efforts and you will enjoy many benefits alongside the Moors.”

Pelayo responded: “Have you not read in Sacred Scripture that the Church of the Lord is like the mustard seed, which, small as it is, grows more than any other through the mercy of God?”

The bishop responded: “Truly, so it is written.”

And Pelayo said: “Our hope is in Christ; this little mountain will be the salvation of Spain and of the people of the Goths; the mercy of Christ will free us from that multitude.”

The Bishop returned to the Moors to report his failure. The defense of Spain was left to Pelayo and his men.

Now Available! Get your copy today!

Amid the mountainous crags of Pelayo’s realm there is a cave that is now known as St. Mary of Covadonga. There, Pelayo and his men prayed to the Blessed Virgin Mary for her assistance and intercession before God as the power of Islam was about to be unleashed against them. Her favor they obtained, in a very remarkable way.

The following day the Moors advanced to kill Pelayo and destroy any last vestige of resistance to their rule in Spain. As soon as they were within range, the Moors began to fire arrows and other projectiles at Pelayo and his men. The arrows and stones turned, however, and came crashing down upon the ones who fired them. Pelayo’s men sent boulders down upon their enemy, and started avalanches that swept many of them away. Although they initially fled, the Moslems were not to be easily overcome, and soon regrouped for another attack.

As the Moors advanced a second time, again they were treated to a shower of rocks and boulders while the sky darkened at the approach of a thunderstorm bursting with lightning and heavy rain. At first the rain made the rocks treacherous and slippery, but as it continued it loosened the stones and cast them down upon the ill-fated Moors. Still, for every one who fell there were two to take his place.

Suddenly a strange light appeared in the cave of Covadonga, and in its midst the Mother of God appeared to Pelayo and his beleaguered men. Speaking to Pelayo, she said, “Arouse they strength; go forth in the name of Jesus Christ, and thou shalt conquer.”

Having delivered her message, the Mother of God disappeared and the supernatural illumination faded. Had the Moors seen the light from the mouth of the cave? Were they so blind that they could not see that God was with Pelayo and his men? The very earth, sky and the elements themselves were full of enmity against them!

When Pelayo emerged from the darkness of the cave a moment later, his eyes blazed with resolve. Filled with newfound confidence, his men swept out from the cave to hurl the Moors from the slopes.

Thwarted by the fury of the thunder storm, their precarious hold on the mountain fast giving way beneath their feet, the Moors fled for their lives as they perceived their approaching doom. Pelayo’s men rushed upon them, and with renewed conviction sent down more arrows and boulders after them, and many more were carried away to their death. When the survivors reached the floor of the valley below, the River Deva had been turned into a raging torrent that swept still more away.

Thanks to Our Lady of Covadonga Pelayo’s victory was such that the Moors were completely driven from the mountain, although enough survived to tell the tale of their defeat. Their general, Alqama, had been slain, and governor Munuza was likewise defeated. Never again did the Moors dare to enter Pelayo’s domain to contest with him.

In time, perhaps due to the example of Pelayo’s heroic resistance, other Catholic kingdoms developed in the north of the peninsula. The kingdom of Pelayo, called the Asturias, grew into Leon, and the other kingdoms included Castile, Navarre, Catalonia, Galicia, and Aragon. Pelayo's heroic resistance was the beginning of the nearly 800 year crusade known as the Reconquista, or reconquest, of Spain.

Excerpt from the book “El Cid, God’s Own Champion” by James Fitzhenry, © copyright 2008 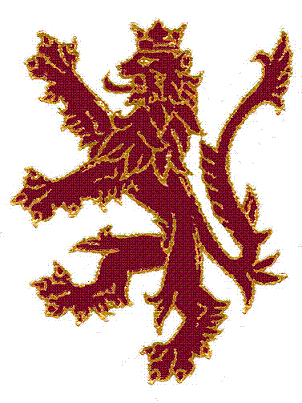