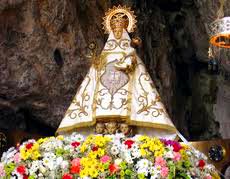 Our Lady of Covadonga

The story of Our Lady of Covadonga begins with King Pelayo and his small army of three hundred men. They lived together as free men in the Cantabrian Mountains shortly after the Muslim conquest of the Iberian Peninsula. His was a tiny kingdom that extended for only ten miles in any direction, but it was a summit that stood clear above the tide that had submerged the rest of Spain. His defiance of Muslim rule must have seemed almost futile and insignificant, but the Muslims eventually learned of it and sent a large army to crush the Christian resistance.

It was the spring of the year 722 when the Muslims finally appeared in the valley to dislodge Pelayo from his lofty peak. Thousands upon thousands of Muslim warriors scaled the steep slopes toward the cave in which Pelayo awaited them.

Amid the mountainous crags of Pelayo’s realm there is a cave that is now known as St Mary of Covadonga. There, Pelayo and his men prayed to the Blessed Virgin Mary for her assistance and intercession before God as the power of Islam was about to be unleashed against them. Her favor they obtained, in a very remarkable way.

The following day the Moors advanced to kill Pelayo and destroy any last vestige of resistance to their rule in Spain. As soon as they were within range, the Moors began to fire arrows and other projectiles at Pelayo and his men. The arrows and stones turned, however, and came crashing down upon the ones who fired them. Pelayo’s men sent boulders down upon their enemy, and started avalanches that swept many of them away. Although they initially fled, the Muslims were not to be easily overcome, and soon regrouped for another attack.

As the Moors advanced a second time, again they were treated to a shower of rocks and boulders while the sky darkened at the approach of a thunderstorm bursting with lightning and heavy rain. At first the rain made the rocks treacherous and slippery, but as it continued it loosened the stones and cast them down upon the ill-fated Moors. Still, for every one who fell there were two to take his place.

Suddenly a strange light appeared in the cave of Covadonga, and in its midst the Mother of God appeared to Pelayo and his beleaguered men. She bore a red shield with a white cross, with the holy name of “Jesus” upon it. Speaking to Pelayo, she said, “Take courage. The Moors are wavering. Go out now and attack them in the name of Jesus Christ and you shall conquer.”

Having delivered her message, the Mother of God, Our Lady of Covadonga, disappeared and the supernatural illumination faded. When Pelayo emerged from the darkness of the cave a moment later, his eyes blazed with resolve. Filled with newfound confidence, his men swept out from the cave to hurl the Moors from the slopes.

Thwarted by the fury of the thunder storm, their precarious hold on the mountain fast giving way beneath their feet, the Moors fled for their lives as they perceived their approaching doom. Pelayo’s men rushed upon them, and with renewed conviction sent down more arrows and boulders after them, and many more were carried away to their death. When the survivors reached the floor of the valley below, the River Deva had been turned into a raging torrent that swept still more away.

Thanks to Our Lady of Covadonga, Pelayo’s victory was such that the Moors were completely driven from the mountain, although enough survived to tell the tale of their defeat. Their general, Alqama, had been slain, and governor Munuza - he who had sent Pelayo to Cordoba in chains - had been uprooted. Never again did the Moors dare to enter Pelayo’s domain to contest with him.

This victory marked the first time that the Moors were defeated, and was the beginning of what is now called the Reconquista, or Reconquest of Spain, which lasted well over 700 years.

Return to Titles of Mary from Our Lady of Covadonga

Return to Roman Catholic Saints Homepage from Our Lady of Covadonga