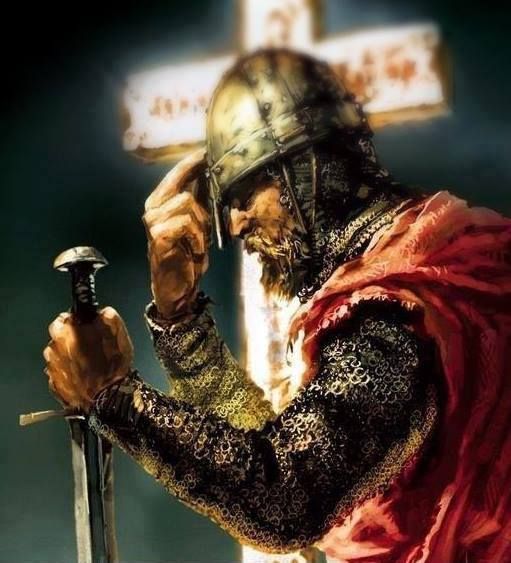 Here are some exciting videos about knights, crusaders, and stories about what they overcame for the glory of the Church and the good of civilization while living in the age of faith.

Our Lord explained to St. Bridget that the spirit of chivalry was the safest path leading to sainthood, the spirit of disinterested and self-denying service for the common good. He said to her in a vision: "A knight who keeps the laws of his order is exceedingly dear to me. For if it is hard for a monk to wear his heavy habit, it is harder still for a knight to wear his heavy armor."

This spirit is meant to signify an interior attitude of the soul to accomplish God's will whatever the cost, a disposition of mind whereby in the revelations of St. Bridget the faithful knight and the self-denying, cloistered and most hidden nun or monk are at one. She explains that the Christian cavalier gives his life to Chirst and "orders his life according to the commandments of Christ, he represses the wicked and aids the humble in the community to obtain their rights. He shall therefore enter into everlasting joy; Christ Himself is the Head of the Christian knights' army, the Holy Cross his royal banner and Christ's passion is the fight against the enemy of mankind and his temptations."

*From El Cid, God's Own Champion

Knighthood - What was knighthood, and what was it like to be a Medieval Knight? Click the link...

Chivalry - A knight's personal code of conduct. Ever wonder what this was? Click the link...

Tancred - Tall, blonde and powerfully built, he was about 20 years old when the First Crusade began in 1096.

Godfrey - Who was the man who defeated the Moslems and ruled Jerusalem?

It has recently become fashionable for historians to claim that the concept of Catholic knighthood, or even the very idea of a follower of Christ taking up arms, is somehow a departure from previous Catholic principles. In doing so they seem to be entertaining the presumption that Christ was a complete pacifist, which he most certainly was not. The popes are also falsely accused of encouraging the crusades solely for the purpose of profit and to increase their own political influence, and even of changing the very essence of what it means to be Catholic because they needed men whom they could exploit by advocating violence. This kind of distorted thinking or outright dishonesty is understandable from modern man, who can little conceive of anyone being motivated by anything other than money or power, but sadly, there are also Catholics who have fallen prey to this exercise in revisionist history.

Part of the confusion on this subject in modern minds is due to the failure to make a distinction between "force" and "violence." By labeling any type of coercion, especially physical coercion, as "violence," it is automatically considered wrong, or evil. We have all heard ad nauseam that "violence never solves anything!" which is presented as axiomatic and necessarily true. It is, however, utterly false, as any moderately informed historian knows.

If one wants to argue whether the solution is just or not, now that's another story, and that's where the difference between force and violence comes into play. Force is the application of coercion (to individuals or nations, as the case may be) by the legitimate authority in defense of justice, whereas violence can be defined as any unjust application of coercion. Based on these classical definitions, the crusades are a case of legitimate defense against unjust invasion. Convoked by legitimate authority, they are a classic example of the lawful use of force.

If we lived in a perfect world, without disorderly passions as a result of original sin, force would not be necessary and violence would not exist - but we don't. Thus, the use of force will be necessary until the Final Judgment. As stated in St. Fernando III, A Kingdom for Christ, "as peace first requires order, order requires force."

5 Myths about the Crusades - Link to a short video explaining the truth about 5 false yet commonly held beliefs about the crusades.

What were the Crusades? - Link to a video explaining what made a crusade a "crusade."