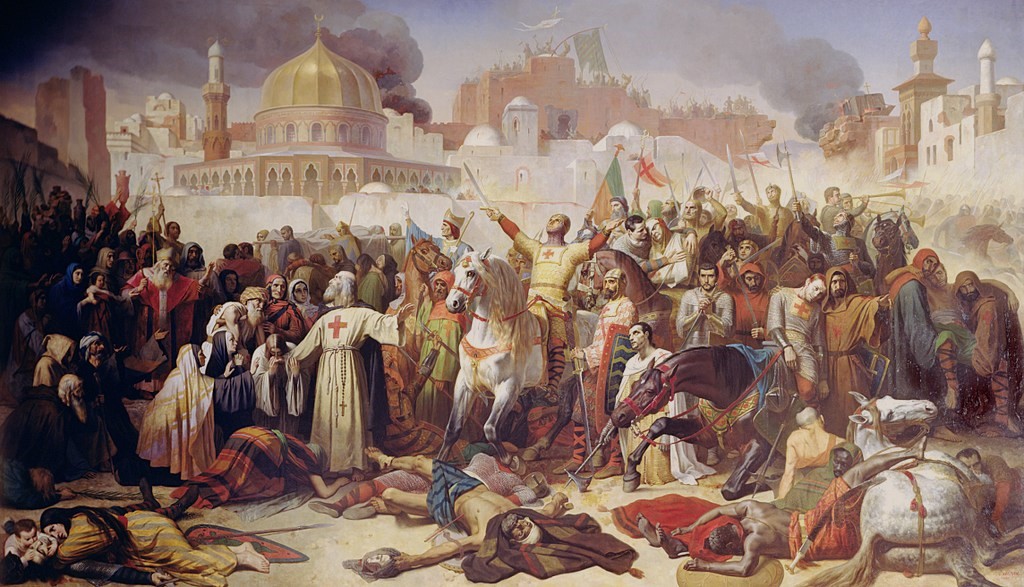 It was in March of 1095 when Pope Urban II gave his famous speech to the assembled French nobility at Clermont. He told of the trials facing the Catholics in the East at the hands of Moslems.

"An accursed race, wholly alienated from God, has violently invaded the lands of Jerusalem and has depopulated them by pillage and fire. They have led away a part of the captives into their own country, and a part they have killed by cruel tortures. They destroy the altars, after having defiled them with their uncleanliness."

"Upon you, above all others, God has conferred remarkable glory in arms, great bravery, and strength to humble those who resist you. Let the deeds of your ancestors encourage you - the glory and grandeur of Charlemagne and your other monarchs. Let the Holy Sepulcher of Our Lord and Savior, now held by unclean nations, arouse you."

Pope Urban offered those who would go on crusade the remission of their sins, and a great reward in heaven. His words must have been very powerful, for the response to his speech was incredible. Those hearing his words shouted "Dieu li volt! Dieu li volt! (God wills it). Thousands of men swore an oath to the go on crusade on the spot. Knights responded from all over Christendom, but especially France, Germany and Italy, all of them eager to take up the cross to stop the depredations their Catholic brethren faced in Outremer.

Gallant knights and devout Catholics went on crusade for the glory of God and to restore the Holy Sepulcher. They traveled by different routes to Constantinople, and in the winter of 1096, were all hosted by the Byzantine emperor Alexius.

Almost three years after leaving their homelands, in the year 1099 the Crusaders reached the Holy City of Jerusalem. Only perhaps a third of the original crusaders who had set out from Christendom were still there, but they would have to be enough to expel the Moslems from the city.

Led by Godfrey and his brother Baldwin, the crusaders fought their way into Jerusalem on June 8, 1099. Fulcher of Chartes, who was there, recorded this account:

"The Franks entered the city magnificently at the noon-day hour on Friday, the day of the week when Christ redeemed the whole world on the cross. With trumpets sounding and with everything in an uproar, exclaiming: "Help, God!" they vigorously pushed into the city, and straightway raised the banner on the top of the wall. All the heathen, completely terrified, changed their boldness to swift flight through the narrow streets of the quarters. The more quickly they fled, the more quickly they were put to flight."

The victorious Catholics quickly established the Kingdom of Jerusalem at the successful conclusion of the First Crusade.