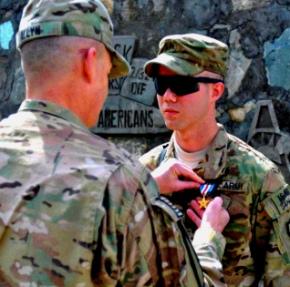 
Sergeant Michael Moynihan is a 22 year old Catholic and an American soldier. He was recently awarded the Silver Star for his gallantry in action against the Taliban fighters in Afghanistan. The Silver Star is the third-highest award for valor in combat.

Then a corporal, Michael was an infantryman assigned to Bravo Company, 2nd Battalion, 27th Infantry, “the Wolfhounds,” who are normally stationed in Hawaii. He was sent with his unit to serve a tour of duty in Afghanistan, and on October 11, 2011, he was on guard on the northern flank of Observation Post Shal. His job was to secure a road which was being paved near the border with Pakistan in a remote and hostile region. The duty was apparently quite hazardous, as Sgt Moynihan had telephoned his father to tell him that the odds of “being successful and coming back from the mission alive were slim to none.” The incredible courage displayed by Sgt Moynihan over the next two days of intense combat were detailed in the narrative that accompanied his award.

The firefight began on October 11 as the American forces came under sustained fire from Taliban fighters. Men were dying on both sides as Sgt. Moynihan returned fire, bullets slamming into the ground nearby as mortars and rockets exploded all around him and throughout the camp.

The American soldiers were able to detect no less than 12 enemy positions. Two missiles were fired at them as Moynihan manned an abandoned and completely exposed machine gun position. From there he was able to suppress the enemy fire, remaining there as the Taliban forces worked desperately to zero in on his position to kill him.

The battle continued the following day. Michael identified a Taliban fighter across the valley, shooting and killing him with one shot from his rifle. As the Taliban were shooting and firing their rockets from concealed positions, Michael realized that someone needed to try to mark their positions to direct return fire more efficiently. As the task was a dangerous one, Michael took it upon himself to do, “with total disregard for his own safety even as the dust settled from a mortar impact.” Proving that his strategy was effective, Michael then directed two missile strikes that killed seven Taliban fighters and a Taliban commander.

The battle raged on as the Americans fought with rifles, grenades, and claymore mines to defend their position. That evening, the enemy desperately attacked with rocket-propelled grenades and AK-47’s as they attempted to overrun the American position. Michael crossed an open area where he was fully exposed to enemy gunfire, “rallying his men and leading a counterattack against the enemy assault. He engaged the enemy with M4 carbine, threw fragmentation grenades, detonated claymores and took control of an abandoned Afgan machine gun position saving valuable resources from being depleted” while driving back the assault.

The heaviest attack occurred on October 13, and Michael was once again seen to risk his life to direct enemy fire as he acquired the enemy firing positions. An 82mm mortar exploded only 30 feet from Michael, knocking several of the American soldiers off their feet. Moments later a second mortar round landed. This one was close enough that the concussion knocked Michael unconscious and wounded five other American soldiers as well as three Afghani’s.

As soon as Michael regained consciousness he directed another soldier’s fire while taking control of an Afghan machine gun. He remained at that position until reinforcements arrived and the battle was brought to a close.

“Corporal Moynihan’s courage under fire as a leader in Bravo Company saved the lives of Americans and Afghan soldiers,” his award states. "He held a vital position under extreme circumstances and was instrumental in helping destroy a determined enemy force. He risked his life in repelling two near ambushes that threatened to breach the vulnerable perimeter of his platoon's patrol base."

Upon returning home, Michael’s mother said of him: “I’m very proud of my son Michael, the qualities that he exercises in carrying out his duties to the United States Army, comes from the solid foundation in which his father and I have endeavored to give him and his siblings in their upbringing through the Catholic Faith. St. Michael pray for us.”