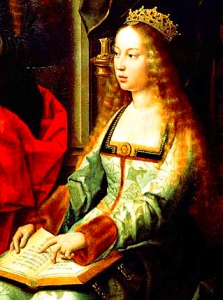 Queen Isabella I, Queen of Castile and Leon, was born April 22nd, 1451, and died November 26, 1504. She is frequently referred to as “Isabel the Catholic,” an honorary title she received from the pope himself. Her husband was Ferdinand II of Aragon, and with him she set about completing the Reconquista, concluding the re-conquest of the Iberian Peninsula by taking Granada back from the Muslims. It was an enormous task, and it is recorded that during one difficult period she left Granada to visit the tomb of her ancestor, Saint King Fernando III, sitting upon his throne as she sought inspiration to go on. Granada was finally taken in 1492, the same year she sent Columbus sailing to the new world. - Editor

A Lady for Our Season

The queens of history really catch our attention. Their proud heads seem to rise above the tumult of events, while their small hands grasp the reins of government, and duty, in more cases than not, rules their hearts. The deeds and the glory of a mighty queen shine out for ages to come.

If you add in the grand successes of a Catholic queen, one whose stern probity spared neither herself nor others, whose vision united her own country and brought millions of pagans into the Church, then you have at least a sketch of the magnificent Queen Isabella of Spain. Were this all that could be said of her, she would still be remembered as one of the greatest rulers of all time.

Queen Isabella is honored for even higher and finer things than merely ruling Spain, saving Granada, Christianizing and civilizing the New World, and bringing back to her country the justice and domestic peace lost by the mismanagement of her incompetent and degraded half brother, Enrique IV . She has not been called Isabella the Catholic for nothing, nor was she named Servant of God merely for being a successful queen. Isabella was also a wife (and that wasn’t such an easy job for a Renaissance queen), a mother who outlived her two eldest children and saw the others suffer much from the necessities of arranged royal marriages, a penitent who spent hours on her knees, and a Catholic placed sometimes in situations depressingly familiar to Catholics of today. The clergy of Castile were riddled with Jewish “converts”, some genuine and very holy, but many others enriching themselves and working against the Church from within. She also had, for part of her reign, a Borgia pope to deal with. Alexander VI had been elected amid a political scramble that so scandalized all of Christendom that on several occasions plans were made to depose him and elect another pope -- something Spain would never have condoned.

For all her statecraft and her successful pursuit of a demanding career, Queen Isabella was not a modern woman. She could hardly have been considered “modern” in her own times, and certainly no one could accuse her of holding to the values of our own. She was a lady timeless in the vision she held of a totally Christian state, timeless in the faith and charity with which she pursued her duty. Out of that same charity, she may reach out to us, interceding and inspiring, but only if as individuals we ask her intercession.

As a Servant of God, she may be prayed to – there is even an official prayer for her canonization – but we may not yet honor her publicly. One day that will come. Queen Isabella has already worked one publicized miracle, the 1998 healing of an American man with terminal cancer – which should be enough to assure us that our prayers for her intercession will be heard.

Today we have need of Queen Isabella. She is a woman who may, in fact, have a mission in our own time. Isabella of Spain has sometimes been called “the Last Crusader.” God help us if she really was the last! She put the enemy out of Spain once long ago, but now that enemy returns to Europe and all the western world with the savagery of terrorism, hoping to build a new empire on the ruinous weakness of liberalism, secularism and heresy. Our leaders flounder, unable or unwilling to turn to God, trying every expedient from appeasement to random threats, quarrelling among themselves as their forebears did throughout the Reconquista. They condemn the injustice and the heartless violence of the enemy while refusing to admit that it is the same enemy who menaced the Faith time and again throughout history. Helpless in the face of fanatic inspired violence, those with no religion at all do not know which way to turn.

Servant of God Isabella of Spain knew. Trustfully consigning her affairs into the hands of God and Our Lady, she devoted her life, her time, and her health to ceaseless battle. She travelled much even when she was pregnant or ill, lived in near poverty as she sacrificed her wealth to pay for arms and horses, risked her person to quell riots, deposed petty tyrants, spent hours holding court and hanging (not excusing) murderous bandits, resisted the bribes, threats and blandishments of those non-Christians and false Christians who had heretofore held more power than the kings of Castile. She never knew the quiet family life she fought to preserve for others, though she bore and loved five children, cultivated the womanly arts (some samples of her needlework are still preserved), and prayed constantly for her family and her realm. She died at the relatively early age of 53, worn out with labors and sorrows, turning as ever, hopefully to God. Two of her children, including her only son, died before her. One of her daughters, married to the inconstant and unloving Philip the Fair, became mentally ill, and another, Catherine of Aragon, was married to (and later “divorced” by, though Isabella did not live to see this) the soon to be infamous Henry VIII.

As queen of Spain and one of the most powerful and influential women in Europe, Queen Isabella had always used her influence against evil, especially against whatever threatened the surest thing on earth – the Holy Catholic Faith. She has been much criticized for bringing in the Inquisition to Spain and no one can consider promoting her cause without addressing some of the grave accusations made against her. It is quite true that people were sometimes burned at the stake -- and that prisoners were tortured. This latter was common practice at the time, actually, and the Spanish Inquisitors were less brutal than their forebears.

Another charge made against Queen Isabella is that she persecuted those whose ideas differed from her own. But the prisoners of the Spanish Inquisition would hardly qualify as prisoners of conscience -- they were not tried for refusing to become Catholics but rather for pretending to be Catholics in order to infiltrate Christian society. Most were reconciled with the Church -- though they were warned that a second lapse into Judaism would be fatal -- and some were exiled. Execution was reserved for serious relapses and horrible crimes -- such as the ritual murder of a three year old boy in one of the most infamous and convoluted cases the Inquisition was called upon to try.

The queen’s decision to finally exile the Jews from Spain caused and still causes even greater outrage among her detractors. To this day, the Sephardic Jews continue to protest against all moves on the part of Rome to proceed in her canonization.

Whether her action was justified is still open to debate. The queen, at least, believed that it was in the best interests of the realm. There was little domestic peace where Jews and Christians lived together. Riots were continual and so many lives were lost through massacres and counter massacres that there seemed no alternative. We can only guess at what might have been, had Isabella not made this decision. What actually did happen was that many Jews chose to leave rather than to convert (an option still offered them) and that many settled in Portugal (from which they were later expelled) and in other parts of Europe. Some sought refuge with the Moslems of North Africa, with whom they had once been on excellent terms during the Moslem occupation of Granada. Unfortunately, those who set sail on the Mediterranean were often robbed, murdered, enslaved, raped and generally shown that the Moslems were fickle friends. Quite a few of the survivors returned to Spain, deciding that Christianity was the true Faith after all. Surprisingly, many of these conversions were genuine and bore good fruit. Others made it to Turkey and formed communities there.

Queen Isabella’s concern and her energies did not stop with the Old World, for she had a great concern for the new. She it was who, after many delays caused by the reconquest of Granada, outfitted and sent off Columbus. She could not know, anymore than Columbus knew, what a new world his discovery truly was – and would become. But her constant concern for the natives led her to ban their enslavement even against the wishes of Columbus himself, and to begin arranging for their instruction in the Faith. She wanted for them the best she knew to give them – but she did not live long into the Spain’s colonial era and those who succeeded her did not have her superabundance of charity and wisdom. Now in our day, as she looks down from heaven on the modern inhabitants of fabulous and barely imagined lands, we can be sure that she wishes us well.

One day we will see this devoted and holy queen canonized. It would be a fine thing for us all if she were made another patroness, along with Our Lady, of the Americas. Is this only a dream? An unrealistic desire? A hope?

Yes, Hope! Hope is a virtue that takes us far into the magnanimity of God. He sees our need. He sees His servant’s eagerness to do good to those who need her, whether in the Americas or in Europe. How long will God allow the fears and folly of those whose duty it is to proclaim good and worthy saints for us to stand in His way? How long will the quibbling and the ill will of His enemies dictate the policy of the Church?

I will tell you how long – so long as we fail to storm heaven for what we need! God’s hands overflow with gifts for us, with graces for the world. But He respects our silence. If we do not ask, we do not receive. We need this saint. What on earth are we waiting for?

Many thanks to Colleen Drippe’ for her excellent article on Queen Isabella.