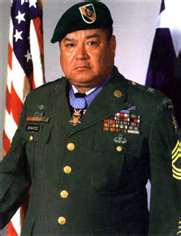 
Roy Benavidez's ordeal began at Loc Ninh, a Green Beret outpost near the Cambodian border. It was 1:30 p.m., May 2, 1968. A Catholic chaplain was saying Mass at a jeep for the sergeant and several other soldiers. Suddenly, shouts rang out from a nearby short-wave radio. "Get us out of here!" someone screamed. "For God's sake, get us out!"

A 12-man team monitoring enemy troop movements in the jungle had become surrounded by an entire North Vietnamese army battalion. “I’m coming with you!” Roy Benavidez volunteered, climbing aboard the rescue helicopter. His only weapon was the bowie knife he always carried, as he had left behind his M-16 in his haste.

Once aloft, they soon spotted the scouting party in a tight circle facing outward toward several hundred enemy troops who were closing in on them. Some were within 25 yards of the Americans' position. The chopper dropped low, ran into withering fire and quickly retreated. Spotting a small clearing 75 yards away, Benavidez told the pilot, "Over there, over there."

The helicopter reached the clearing and hovered 10 feet off the ground. Roy Benavidez made the sign of the cross, jumped out carrying a medic bag and began running the 75 yards towards the trapped men. Almost immediately, Roy Benavidez was hit by an AK-47 slug in his right leg. He stumbled and fell, but got back up, convincing himself that he'd only snagged a thorn bush. He kept running to the brush pile where Wright's men lay when an exploding hand grenade knocked him down and ripped his face with shrapnel. He shouted prayers, got up again, and staggered to the men.

Four of the soldiers were already dead, the other eight were all wounded and pinned down in two groups. Roy Benavidez bound their wounds, injected morphine and, ignoring NVA bullets and grenades, passed around ammunition that he had taken from several bodies and armed himself with an AK-47. Then Benavidez directed air strikes and called for the Huey helicopter to attempt a landing near one group.

While calling in support he was shot again in the right thigh, his second gunshot wound.

When the chopper flew in he dragged the dead and wounded aboard. The chopper lifted a few feet off the ground and moved toward the second group, with Roy Benavidez running beneath it, firing a rifle he had picked up. He spotted the body of the team leader Sergeant First Class Wright. Ordering the other soldiers to crawl toward the chopper, he retrieved a pouch dangling from the dead man's neck. In the pouch were classified papers with radio codes and call signs.

As he shoved the papers into his shirt, a bullet struck his stomach and a grenade shattered his back. The helicopter, barely off the ground, suddenly crashed, its pilot shot dead.

Coughing blood, Benavidez made his way to the Huey and pulled the wounded from the wreckage, forming a small perimeter. As he passed out ammunition taken from the dead, the air support he had earlier radioed for arrived. Jets and helicopter gunships strafed threatening enemy soldiers while Benavidez tended the wounded.

"Are you hurt bad, Sarge?" one soldier asked. "Hell no," said Benavidez, about to collapse from blood loss. "I've been hit so many times I don't care anymore."

While mortar shells burst everywhere, Roy Benavidez called in Phantoms "danger close." Enemy fire raked the perimeter. Several of the wounded were hit again, including Benavidez. By this time he had blood streaming down his face, blinding him. Still he called in air strikes, adjusting their targets by sound. Several times the pilots thought he must have been killed, but then his voice would come back on the radio, calling for closer air strikes.

Throughout the fighting, Benavidez, a devout Catholic, made the sign of the cross so many times his arms "were going like an airplane prop," but he never gave in to fear. Finally, another helicopter landed.

"Pray and move out," Benavidez told the men as he helped each one aboard. A fallen North Vietnamese soldier stood up behind Benavidez as he carried a seriously wounded soldier over his shoulder. Swinging his rifle, he clubbed Benavidez in the head.

Benavidez fell, rolled over, and got up just as the soldier lunged forward with his bayonet. Benavidez grabbed it, slashing his right hand as he pulled his attacker toward him. He drew his bowie knife with his left hand and stabbed the enemy soldier to death, but not before the bayonet had passed completely through his left forearm. As Benavidez dragged the last American soldier to the chopper, he saw two more North Vietnamese soldiers materialize out of the jungle. He snatched a fallen AK-47 rifle and shot both. Benavidez made one more trip to the clearing and came back with a Vietnamese interpreter. Only then did he let the others pull him aboard the helicopter.

Blood dripped from the door as the chopper lumbered into the air. Benavidez was holding his intestines in with one hand. Bleeding almost into unconsciousness, Benavidez lay against a badly wounded soldier and held onto him with his other hand. He had over thirty seven puncture wounds. His eyes were so caked with blood that he could not see. Neither could he speak, as his jaw had been broken when one of the North Vietnamese soldiers had clubbed him in the face.

Once safely back at the camp the wounded were examined one by one. Benavidez was so immobile that they placed him with the dead after a brief examination.

Sergeant Benavidez lay helpless in a body bag, bathed in his own blood, but he was not so far gone that he could not hear what was going on around him. He recalled it as the scariest moment of his life, even more so than the earlier events of the day.

Jerry Cottingham, a friend, recognized him and screamed: "That's Benavidez! Get a doc!"

When the doctor arrived he placed his hand on Roy's chest to check for a heartbeat. He pronounced Benavidez dead and shook his head. "There's nothing I can do for him."

As the doctor bent over to zip up the body bag, Benavidez did the only thing he could think of to let the doctor know that he was alive. He spit in the doctor's face. The surprised doctor reversed Roy's condition from dead to: "He won't make it, but we'll try".

Benavidez spent almost a year in hospitals to recover from his injuries. He had seven major gunshot wounds, twenty-eight shrapnel holes and both arms had been slashed by a bayonet. Benavidez had shrapnel in his head, scalp, shoulder, buttocks, feet, and legs. His right lung was destroyed. He had injuries to his mouth and back of his head from being clubbed with a rifle butt. One of the AK-47 bullets had entered his back exiting just beneath his heart.

But he had won the battle, and because of his heroic actions, many American soldiers are alive to tell the tale. When told that his one man battle against the North Vietnamese was “awesome” and “extraordinary,” Benavidez replies: "No, that's duty." 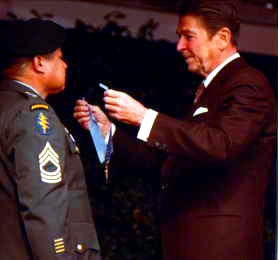 On February 24, 1981, President Reagan awarded Roy Benavidez the Citation for the Medal of Honor. Benavidez, however, did not regard himself as a hero. He said of his actions: "The real heroes are the ones who gave their lives for their country. I don't like to be called a hero. I just did what I was trained to do."

Master Sergeant Roy Benavidez died on November 29, 1998. He was the son of a Texas sharecropper, part Yaqui Indian and part Mexican, and a seventh-grade dropout. He grew up an orphan, taunted by the term "dumb Mexican." But, as Ronald Reagan noted, if the story of what he accomplished was made into a movie, no one would believe it really happened.

If you would like to read more about Master Sergeant Roy Benavidez's life, before, during and after the Vietnam War, then I recommend that you read his book co-authored with John R. Craig, "Medal of Honor - A Vietnam Warrior's Story" (Brassey's, Inc, 1995). 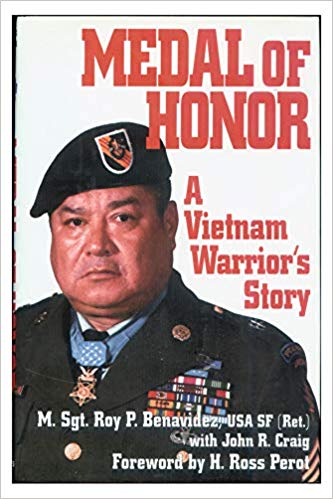