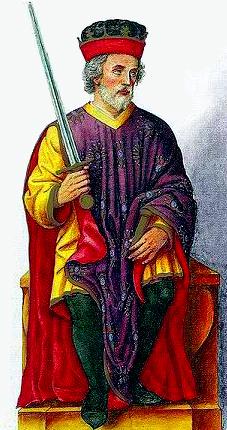 Deservedly known as “The Noble,” he is perhaps best remembered for his amazing victory over the Muslim Almohad army at the battle of Las Navas in 1212, which was one of the most significant battles in history.

Since Alfonso’s father, Sancho III, died after a reign of only one year, Alfonso could not truly rule due to his extreme youth. Noblemen, claiming to act in his name, or simply vying for power, began to tear the kingdom apart with their strife. Surviving a series of intrigues, Alfonso eventually came to wield the power of the monarchy at a young age and managed to restore his kingdom.

He also took up the ancient work of the Reconquista that had also occupied so many of his predecessors. Uniting his Castilian noblemen in the cause, Alfonso also struck an alliance with the kingdoms of Leon, Navarre, Aragon and Portugal against the Muslim invaders.

For several centuries all of the Christian kingdoms in Spain had been menaced by the Muslims of Al-Andalus, and particularly by the Muslim zealots of Africa, who at this time were known as the Almohad.

In the year 1194 the caliph of the Almohads in Africa declared Jihad (holy war) against the Christian kingdoms and prepared to invade the Iberian Peninsula with a sizable army.

An immense host of Muslim Almohad warriors under Abu Yusuf al-Mansur crossed from Africa at Tarifa in 1195 and began to move toward Castile. King Alfonso VIII marched with his army to Alarcos to defend his lands from invasion as the mortal enemy of Christendom advanced toward his realm.

Treacherously remaining absent with his army, he left the King of Castile alone to face almost certain annihilation. 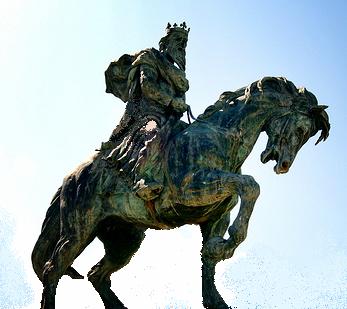 King Alfonso VIII and his knights fought magnificently, but they were eventually worn down and overwhelmed by the sheer number of the enemy. Becoming completely surrounded, King Alfonso’s knights entreated their king to withdraw from the battle and save his life, but he would have none of it, preferring to die fighting. Recognizing the loss his death would mean to all of the Christian kingdoms, his remaining knights led him unwilling from the field. Still, he had to fight his way through, and when he reached the safety of Toledo, he had with him only twenty Castilian knights.

The battle was a horrendous loss for Castile, as the entire army of the kingdom had been annihilated. Many of the castles in the region that still belonged to Castile surrendered to the invading army without a fight, while others were simply abandoned. Abu Yusuf al-Mansur did not advance further into Castile, however, because his own losses had been significant.

The King of Leon attempted to take advantage of Castile’s weakened position by demanding land and castles from his cousin. While the Muslim caliph celebrated his victory over the bodies of the Christian dead, the king of Leon actively encouraged the Almohad to continue the jihad and overrun Castile completely. If it had not been for a revolt that recalled the caliph to Africa, King Alfonso VIII might have lost his entire kingdom.

For King Alfonso, Christian chivalry was more than just a code of conduct or a set of rules to which he adhered; it was a pursuit of virtue meant to guide him in all of his thoughts and actions. In striving for the ideal of knighthood, he had attained a true nobility of character. Living a life of honor, he was a magnificent warrior who courageously defended the Church and his kingdom of Castile.

As soon as it was possible, King Alfonso, struck out again in a effort to reclaim the lands that had be taken from his people by the invading Moors in Al-Andalus.

In response, the Almohad caliph returned to the Iberian Penninsula with another huge army. King Alfonso’s army was not strong enough to stand against them, so the Castilian king suffered the invasion of the southernmost region of his realm and the loss of the strategic castle at Salvatierra. Fortunately for Alfonso, the defenders of Salvatierra had delayed the caliph long enough that the campaign season ended and the caliph could go no further. The immediate threat to Castile had been turned aside as the caliph and his army moved south, wintering at Cordoba for the remainder of the year.

King Alfonso VIII knew the caliph would return the following spring, and he was not the kind of man to cower in a darkened corner as death stalked him. He and his ancestors had defied the invader for several centuries, and they would continue to do so until either they had all perished in the darkness of Islam, or the Muslims themselves were completely expelled from Spain.

Knights from all parts of Europe began to gather in Toledo the following Spring. Ten thousand knights and 100,000 foot soldiers, they were the strongest Christian army ever assembled during the whole of the Reconquest up until that time. Yet, even with all the assembled might of Christendom, the odds were still strongly against the Christian army when it sallied forth to meet the Almohad army.

The Muslim caliph was not intimidated, as he boasted that he was strong enough to fight against all who adored the sign of the Cross.

The two armies met at a place near Las Navas de Tolosa, and there was fought what is considered to be one of the most important battles of the Reconquest. As has so often happened in throughout the ages, Mary, Help of Christians, would not leave her children unassisted:

"The king’s banners floated above the tempest that was but a churning sea of bodies, blades and bobbing helmets where they briefly cleared their way with deadly blows. No man bore either banner, for they were both now held in the invisible hands of angels. The banners moved, seemingly of their own accord, passing directly over the heads of the astounded enemy. They finally came to rest motionless in the air above Miramamolin’s own tent. The Africans fired arrows and threw stones at the banners, but try as they might, they could do nothing to harm the banners. Mary, Virgin Most Powerful, had claimed that camp, and there was nothing anyone could do to change it."

"Alfonso the Noble attacked furiously, killing some, wounding others, and terrifying the rest into a panic-stricken flight. To the proud cry of “Santiago!” Don Alvaro and the knights of the military orders lowered their lances and surged forward into the thick of battle."

"The Muslim horsemen stiffened, staring blankly at the unexpected assault. Horses screamed as they reared and threw their riders, and the racing steeds crashed and trampled through the formerly unbreakable line."

"A wail of despair rose to the skies, while desert warriors scattered and leapt aside to avoid the flailing hooves. King Alfonso had seemingly come from nowhere to burst upon the very point on which the whole battle turned. The valorous king was prepared to die rather than be conquered as his smoldering eyes gave evidence. It seemed to the Moors that an avenging angel had sped down to earth from the heavens, and like men gone mad with terror, they cast down their spears and began to flee in all directions, running wildly into each other."

"Seeing their sovereign fighting like the knight that he was, the enthusiasm of the Castilians rose so that nothing could stop their impetuous advance..."

(excerpt taken from, Saint Fernando III, A Kingdom for Christ)

King Alfonso and his Christian knights won a miraculous victory. The military power of the Almohad was broken, and their influence in Andalusia suffered a tremendous blow. King Alfonso returned to Castile widely celebrated as a great champion, and was received in Toledo with exultation and joy by all the people.

Later, King Alfonso wrote a letter to Pope Innocent relating the circumstances of the miraculous victory over the Muslim army, stating in part, “In order to show how immense were the numbers of the enemy, when our army rested after the battle for two days in the enemy camp, for all the fires which were needed to cook food and make bread and other things, no other wood was needed than that of the enemy arrows and spears which were lying about, and even then we burned scarcely half of them...”

To recognize the undeniable truth of God’s Divine assistance, and to commemorate the incredible victory in all the lands of Castile, from this day forward July 16th would be remembered and celebrated in Castile as the date of the “Triumph of the Holy Cross.”

Two years later, while on his way to meet the king of Portugal, King Alfonso suddenly became ill and died. Even though he did not live many years after his triumph at Las Navas, King Alfonso's fine example as a father and a knight outlived him by many years.

He had certainly been a good influence on his own family, but more than that, he also positively affected the religious, political, and social order of at least three kingdoms for decades to come. Ultimately, through his grandsons, King St. Fernando III of Castile and Leon and King St. Louis IX of France, the social reign of Our Lord Jesus Christ became a reality. In 1587, on the orders of King Phillip II, the sepulcher of Alfonso VIII was uncovered. King Alfonso’s body was found to be whole and incorrupt, and he was still seated upright on the royal throne. His clothes were in perfect condition, as if they had just been made.