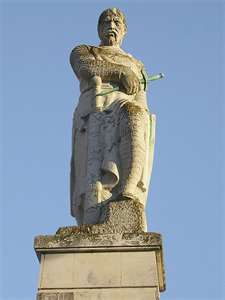 There is a castle in the south of Spain that was the scene of one of the most remarkable dramas ever recorded throughout all the long ages of history. This magnificent stronghold, the castle of Tarifa, can still be seen and visited today, and although it is maintained in excellent condition, it has lost the strategic importance it once commanded.

The castle stands on what is in reality an island, connected to the mainland by a causeway at the very southernmost tip of Spain. It is directly opposite the Rock of Gibraltar, and thus is thought to be at the very place where the Muslim hordes had invaded the Iberian Peninsula in the year 711. To stand beneath its walls is to be suddenly transported back in time to the middle ages, when Spanish knights and noblemen stoutly defended their land against continual Islamic aggression.

It was at the end of the glorious 13th century when Sancho IV was king of Castile, Leon, and Galicia in the land that is now known as Spain. He was the latest in a long line of kings stretching back hundreds of years, kings who had engaged themselves in a noble effort to recapture their land from their Muslim oppressors. This movement has become known as the “Reconquista,” or reconquest, beginning when Pelayo formed the tiny kingdom of the Asturias with 300 valiant men, and would not end until King Ferdinand and Queen Isabella finally defeated the Kingdom of Granada and unified the Iberian Peninsula in 1492.

Until that reconquest was achieved, Spain was largely a land of merciless brutality and constant warfare. Muslim raiders frequently invaded the Catholic kingdoms, killing and taking slaves, burning crops and looting as they went. Those who resisted were killed, as were the elderly, who were considered useless. Families were torn apart as the young and strong were taken as slaves, while the most beautiful were taken to fill a sultan’s harem. The Muslims, or Moors, as they were known in Spain, engaged in a slave trade so extensive that no other similar event in history remotely compares to it. If one were unfortunate enough to fall under Muslim rule, in a condition other than slavery, it meant a life of severe discrimination, and to our modern minds, unimaginable oppression.

King Sancho IV, the grandson of King St Fernando III, seeking to further secure his realm, desired to take the castle of Tarifa from the Moors. It would be no simple task, as the city was surrounded by a wall having twenty-six towers, an obstacle that would have to be overcome before even reaching the castle itself. Stout and formidable indeed, these fortifications were so well constructed that they have survived the centuries and can still be seen today. 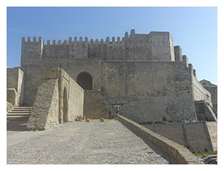 After six months siege, during which King Sancho had paid handsomely for the use of the Genoese fleet, the people of Tarifa surrendered because of famine. As King Sancho did not have the resources or manpower to occupy the castle, his intention was to demolish the castle so it could no longer be used against him. The Grand Master of the military order of Calatrava, who had participated in the siege with his knights, thought it important to keep the strategic castle, and so made a selfless proposal to the king.

The Knights of Calatrava were an order of monastic knights who had for centuries defended strongholds in border regions against the Moors where no one other Christian would even dare to venture. The knights slept in their armor, and were eager to defend Christian lands against Islam. The Grand Master said that he and his knights would remain behind to defend the castle for a period of one year. The Grand Master hoped that after that period of time a Catholic nobleman of courage and means would come forward to replace his knights once that year was up. The king agreed.

At the end of one year, Don Alonso Perez de Guzman, an honorable knight and nobleman who lived with his family in Leon, volunteered to take over the command of the castle of Tarifa, and to defend it against the Moors to the last extremity. Don (meaning gentleman or aristocrat) Alonso, had already earned the distinction of being known as “El Bueno,” or “the Good,” well before the occurrence of the famous exploit which I am about to recount. Guzman moved with his family to Tarifa, except for his son, who had already been placed under the care of Don Juan, the king’s brother. It was the custom of that age that noblemen would have their children sent to live as pages as part of the king’s household where they would learn manners and customs and be raised to become knights.

Don Juan eventually turned against his brother in rebellion and fled to safety in Portugal. Desiring to become king in his brother’s stead, he offered his services to Yusuf-ben-Yacoub, the King of Morocco. He asked to be given only 5,000 horsemen to take back the castle of Tarifa. It was a small enough investment for the Muslim king, who eagerly provided the needed men. Under normal circumstances, Don Juan could never expect to overcome a stronghold such as Tarifa with so few men to command, but he never intended to obtain Tarifa by force. Instead, he expected to use treachery and blackmail, which he found to be much more reliable tools. He had once captured an entire city by merely threatening to kill a child hostage whose mother was the lady who commanded the fortress at Zamora.

Suddenly appearing before the gates of Tarifa with his army, Don Juan stepped forward leading a small boy who stood with his wrists tied together. The defenders of Tarifa angrily responded with shouts and threats as they recognized the boy to be Don Alonso de Guzman’s eldest son. Now, the boy was being used as a pawn by the dishonorable prince to help him gain the castle he could never take by storm.

“Alonso Perez de Guzman!” The prince shouted, ignoring the threats. “Know that unless you yield this stronghold to me immediately, you shall behold the death of your own son at my hand!”

Alonso de Guzman looked down from the battlements. He ground his teeth as he witnessed his eldest son thrashing about uselessly in the grasp of the foul prince. Seeing his father appear, the young boy stopped struggling and held out his hands toward his father as tears streamed down his face.

Don Alonso Guzman said nothing as the moments passed and Don Juan studied his face with a grim satisfaction, looking for any sign of weakness or indecision. It is true that Don Alonso’s eyes filled with tears as he looked upon his son, though otherwise his outward expression remained as serene and unmoved as if his features had been chiseled in stone. Nowhere on his countenance could be seen the agony which passed in his soul.

Don Alonso knew he could not act impulsively, for if he betrayed his king’s trust, then not only would he fail in his duty as a knight, but the way would be made open for the Muslims to re-enter Spain in force. He would live to witness the sight of innumerable families having their sons and daughters ripped away from them to be made slaves. Still, this was his firstborn, a son he loved, and the one who was meant to inherit his name and his property, though Don Alonso could not save him except at the expense of his honor and to the detriment of his lord.

Then, when it seemed as if he could not speak for sorrow, Don Alonso Guzman suddenly opened his mouth and spoke these words:

“I did not beget a son to be made use of against my country, but that he should serve her against her foes. Should Don Juan put him to death, he will but confer honor on me, true life on my son, and on himself eternal shame in this world and everlasting wrath after death. So far am I from yielding this place or betraying my trust, that in case you should want a weapon for your cruel purpose, here is my own knife!” 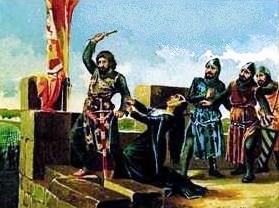 And so saying, Don Alonso Guzman drew a knife from his belt and threw it down from the wall in the direction of the prince. He then turned his back and returned to the castle where, keeping his emotions in check as he sat down quietly with his wife.

A moment later there were strident shouts and cries of revulsion coming from the battlements. Don Alonso Guzman stood and returned to his men, who sorrowfully informed him that Don Juan had murdered his son by cutting his throat in an unmanly transport of wild rage.

The Moors were not prepared to lay siege to a stronghold as powerful as Tarifa, but even if they had been, they were themselves so disgusted by what they had just witnessed that they severed their alliance with the treacherous Don Juan. Dishonored and disgraced, unacceptable in any Christian land, the wicked prince slunk away to find refuge living among the Moors at the court of Granada.

King Sancho was bedridden with an illness at Alcala de Henares when he learned of the tremendous price his vassal had paid to defend the castle at Tarifa. Due to his illness, the king could not go to Don Alonso to console him, or to thank him for his sacrifice. Instead he asked the nobleman to come to him at Alcala. In the meantime, he hurriedly sent a letter to Don Alonso, praising him and comparing his sacrifice to that of Abraham.

Huge crowds gathered all along the route Don Alonso Guzman took to the king’s court, for all desired at least a glimpse of the man who would not break his oath even at the cost of his son’s life. Then, when he neared the king’s castle, King Sancho went out with his court to greet him on the way. Embracing Don Alonso, the king greatly praised the nobleman, turning to his knights as he said, “Here learn, ye knights, what are the exploits of virtue. Behold your model.”

Since he had been so faithful with Tarifa, even greater lands were now given to Don Alonso by the king. He was made lord of Medina Sidonia, and of all the lands between the Guadiana and Guadalquivir rivers, for himself and his posterity. King Sancho also decreed that the “the Good,” be made a permanent part of Don Alonso de Guzman's family name.

Don Alonso Guzman lived to an old age, and his descendants include a long list of generals, dukes, and viceroys. Don Alonso Perez de Guzman spent his entire life faithful to the highest expectations of the Medieval Code of Chivalry and Knighthood, all the while giving glory to God and doing great honor to himself, his nation, and to his family name.