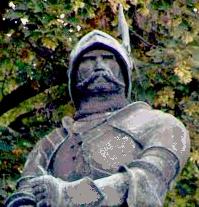 The White Knight of Wallachia

John Hunyadi, the White Knight of Wallachia, was born in the year 1407. He was a mighty Catholic warrior who led the forces of the Kingdom of Hungary to halt the advances of the Ottoman Empire into Christendom. A military genius, his entire life was spent in this noble cause. He is one of the great Defenders of Christendom. The king of Hungary recognized Hunyadi’s exceptional military abilities while he was still quite young, and wisely made him a trusted advisor and the field commander of his armies. Hunyadi quickly rewarded King Sigismund’s confidence in him by demonstrating his complete mastery of military strategy at the expense of the invading Ottoman army of Ishak Bey, which he defeated in battle at Semendria. When another huge Ottoman army invaded Transylvania the following year, Hunyadi, with only a small force, decimated the immense host and put them to flight.

The Ottoman Empire, with a better appreciation of their adversary, put together an even larger and more powerful force to invade Hungary in the year 1442. With 80,000 of their finest warriors, including thousands of Janissaries, they were dispatched with the intention of punishing the Hungarians for their previous defeats.

Hunyadi met them at a place called the Iron Gates with only 15,000 men. Upon seeing the diminutive size of Hunyadi’s army, the Ottoman commander, Sehabbedin, arrogantly expected to easily sweep them from the field. Instead, Hunyadi, with incredible skill, repeatedly maneuvered his forces into advantageous positions to overwhelm the ineffective forces of the disbelieving Ottoman commander. The expedition meant to humble Hunyadi instead made of him a hero celebrated throughout all of Christendom.

Hunyadi followed up his remarkable victories with an expedition of his own that has come to be known as the “Long Campaign.” Marching at the head of his vanguard, Hunyadi boldly passed through the Gate of Trajan to enter recently conquered Muslim territories in the Balkans. He was soon challenged by an Ottoman army near the town of Nish. There he confronted a distinguished general and invincible warrior who, because of his proven ability, had come to be known as Iskander, Lord Alexander. This name was given him by the sultan himself, honoring the commander by comparing him favorably to the Macedonian conqueror Alexander the Great. Hunyadi would soon come to know how deserving Iskander was of the honor.

As it turned out, Iskander had never truly accepted Islam and was planning on joining the advancing Catholic army. When the battle began, Iskander switched sides with three hundred Albanians who had been forced to serve the Turks, fighting side by side with Hunyadi. Turning their swords against their Islamic oppressors, they easily defeated the Muslim army and took back the city of Nish. Further successes followed after Nish during the Long Campaign, as Hunyadi triumphed in Bosnia, Herzegovina, Serbia, and Bulgaria before winter forced him to return home.

Iskander was asked to join a papal alliance which included Hungarian, Bulgarian, and Polish forces, together with Teutonic Knights, in a new Crusade against the Turks. They marched overland to Varna, bypassing Ottoman strongholds, where they expected to meet the Papal fleet and sail on to Constantinople. These 25,000 men, under Hunyadi’s capable leadership, might actually have been sufficient to drive the Turks out of Europe.

Sadly, it was not to be. The plan was completely thwarted by base treachery, as a traitor among the Christians advised the Ottoman sultan of the advance of the Christian army. In a further despicable act of betrayal, the Venetian galleys that had been sent on ahead in order to prevent the sultan from crossing back into Europe, instead offered the use of their ships to the Ottoman sultan. They received one gold piece in payment for every Turkish soldier they transported back across the Bosporus. The sultan’s army of 100,000 men then traveled toward Varna to await the coming of the unsuspecting Christians. In a separate and final act of treachery, Iskander was prevented from joining the Christian army through a deceitful ruse perpetrated against him by the king of Serbia, who was hoping to gain the sultan’s favor. None of these men seemed to be aware that the defeat of this army and the death of these Christian warriors would be to their eternal shame, and something for which they would someday have to answer personally to God.

The Christian army learned they had been betrayed at a point when they were trapped between the enemy and the Black Sea. Some of the men called for a retreat, even though that wasn’t feasible. Others wanted to take up a defensive position. Hunyadi called for action. “To escape is impossible, to surrender is unthinkable. Let us fight with bravery and honor our arms.”

The battle began as the Christian left wing repelled the attack directed against them, and then chased the retreating Ottoman forces from the field. The Christian right wing was overcome, however, and also retreated, many of them cut down as they fled. The enemy were stopped temporarily by reinforcements, and Hunyadi told 20 year old King Wladyslaw to wait upon his return with 500 of his Polish knights. The outcome of the battle was still in the balance when King Wladyslaw disregarded Hunyadi’s advice and attempted a direct assault with his knights against the sultan and his bodyguards, the dreaded Janissaries. The king fell, and was slain by a Janissary, who cut off his head to display it on a pole to the Christian host. 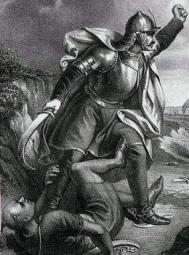 Discouraged and defeated, the remnants of the Christian army rallied around Hunyadi, who was somehow able to orchestrate the retreat of the army. Thousands died in battle, and many others who surrendered were slaughtered at the sultan’s command, although a few were captured and sold as slaves. The sense of optimism felt throughout Christendom was immediately swept away with the terrible defeat. The shame of it all is that it did not have to be, as it is almost certain that the outcome of battle would have been reversed only if Iskander had been present.

The following years were full of conflict and difficult trials for Hunyadi, even though heaven had provided him with a powerful ally in Iskander. After this defeat at Varna, it appeared that the Ottoman Empire had grudgingly granted Hungary a period of peace. In actuality, Mehmet II was only reluctantly conceding a cessation to the Hungarian conflict in order to concentrate his efforts on other objectives.

In the year 1453 all of Christendom was stunned to learn of the fall of Constantinople to Mehmet the Conqueror, great-grandson of Bayezid. The Byzantine Empire, which had survived for over 1,000 years keeping at bay all of the nomadic tribes of Asia, was a bulwark which was now suddenly gone. Emperor Constantine had died fighting, thousands had been slain, and tens of thousands more were sold into slavery.

The Muslim conquest of Constantinople was a remarkable achievement that proved the power of the Ottoman Empire. The great and ancient city, once the seat of the Roman Empire, became the new seat of Ottoman government. Entering the city in triumph, Mehmet saw himself as the successor to the Caesars, and ordered that a splendid palace be built there for his private residence where he would live from that time on.

The Christian kingdoms that bordered the Ottoman Empire suddenly realized that they were now vulnerable to further Turkish aggression. Iskander and the Albanians, as well as Hunyadi and the Hungarian people, prepared for the impending assault they knew would soon come.

In 1456 Mehmet II attacked Hunyadi at Belgrade with an army of 160,000 men. Hunyadi was on his own with only 4,000 soldiers to resist this huge army, but due to the preaching of St John Capistrano, perhaps as many as 30,000 men, mostly peasants, flocked to Hunyadi’s banner. Most armed only with farming implements, and having no military training, they were eager enough, though seemingly ill-matched to go up against the Ottoman infantry.

Heavy cannon fire had demolished the formidable walls of Belgrade in several places when the Turks finally entered the city in force. The desperate fighting flowed from street to street, but despite their superior numbers, the Janissaries were outdone by the incredibly fierce determination of St. John Capistrano and his devoted followers. Not satisfied with merely holding their city, the Christian’s trailed behind St. John through the open breaches as he held the crucifix aloft. Taking the fight to the Turks, the Christians put them to flight, while the sultan himself was wounded and carried from the battle.

The siege of Belgrade was perhaps Hunyadi’s greatest victory, though he didn’t long outlive it. A few days after the battle, having accomplished many great deeds to preserve Christendom, Hunyadi took ill and died. Mehmet II gave praise to Hunyadi upon learning of his passing, saying, “Although he was my enemy I feel grief over his death, because the world has never seen such a man.” Pope Callixtus III lamented, “The light of the world has passed away.” They were fitting tributes to the White Knight, whose efforts had helped save Christendom. 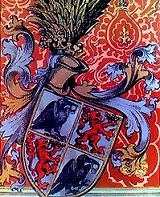