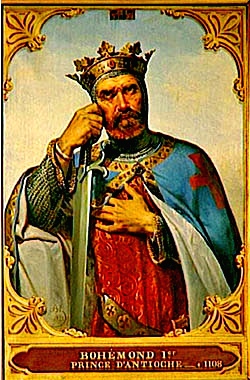 Bohemond, prince of Taranto, and Raymond IV, Count of Toulouse, are knights famous for their participation in the First Crusade that successfully recaptured Jerusalem from the Muslims. What is less well known is that they also captured the fortified city of Antioch, located about half way from Constantinople to the city of Jerusalem, and the many miracles that occurred at Antioch. Their amazing accomplishments are told at greater length in Defenders of Christendom. The First Crusade was the Catholic response to centuries of Muslim aggression against Christians. The Emperor of the Byzantine Empire requested aid from Christian Europe to hold his empire. In addition, Catholics in Europe were appalled at the treatment Christians received at the hands of Muslims, who were constantly attacking Christian lands and subjecting Christians to all manner of outrages including pillage and slavery. Once Jerusalem was taken, the Holy Land was cut off from Christian pilgrims, who were often killed trying to visit the holy places.

It was Pope Urban II who finally called on knights and warriors to travel in an armed pilgrimage to the Holy Land, taking up arms simply because they would doubtlessly have to defend themselves against Muslim attack. For the Crusaders, this was an expensive proposition as well as a fearsome journey, for there was a great probability of death. Consider that about half the men who joined the Crusade died in battle or of starvation along the way. The Crusaders also often performed difficult devotions during the long pilgrimage.

William of Tyre describes Bohemond as "rather tall and of fine figure. He had blond hair and well-made features. His whole regal bearing plainly showed him to be the prince to those who did not know him. His conversation was agreeable and easily won the favor of those who listened to him. He was of a generous nature and, like his father, truly magnificent." In October 1126, after his eighteenth birthday, he took the Crusader's oath and left for Antioch. His lands he left under the governance of the Pope.

The city of Antioch had been taken by the Muslims in 1085, and so our forefathers were only trying to take back what had been a Christian city. There was no overall leader of the expedition, though Bohemond and Raymond IV were important leaders among other powerful nobles. 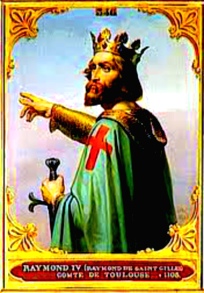 The great battle for Antioch could be called the key to the First Crusade. It had to be taken so that the supply lines could be kept open along the way to Jerusalem. Unfortunately, the city was large and well fortified, with strong walls that the Crusaders could not break. Their only hope was to try to starve the city into submission, although conditions were also so bad for them that many Christians were also starving, and many were reduced to eating their own horses, dogs, rats, and even worse things.

When it seemed conditions could get no worse the Christian army learned that a large Muslim army was coming to drive them off and destroy them. It was at this time that they observed incredible signs, a series of natural phenomena that included a comet streaking through the sky and what is believed to have been an aurora. Besides the astonishing glow seen in the night sky, there was also a great movement in the earth. Many also reported seeing a large cross appear in the sky that advanced slowly toward the east. There signs were interpreted by the Crusaders as demonstrating God's displeasure toward them. Many began to do penance.

The army was forced to divide when Bohemond led an expeditionary force away from Antioch to seek food to feed the army. He encountered a Muslim army over 10 times the size of his own force. Undaunted, he attacked the enemy. God rewarded his courage, as He miraculously multiplied Bohemond's force, turning 700 Latins into a force of 2,000 men. The Turks were amazed, and turned in flight, which led to a Christian victory and a great slaughter among the enemy.

The Christians at Antioch were eventually able to bribe one of the Muslim guards to be allowed to mount the wall and gain entry to the city. The enemy panicked to find the Christians inside, and so did not effectively resist. After several months of hardship, the Christians were finally able to take the city.

The very next day a huge Muslim army arrived at Antioch. If the Christians had still been outside the walls, things could have been very bad for them. Still, they were exhausted and weak, and there was no food inside Antioch. On the verge of collapse, the leaders swore to support each other and not to try to escape, though their defeat seemed inevitable.

At this time a man named Peter Bartholomew received a vision about the location of the Holy Lance that had pierced the side of Christ. It was recovered exactly where Peter said it would be, boosting the army’s moral. This was obviously a sign from God, so they decided to attack the enemy. The best estimates state that they were outnumbered 7 to 1, but they felt inspired to attack nonetheless. 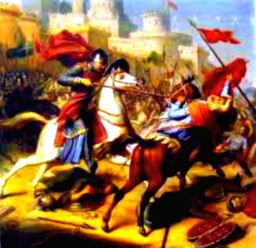 On 28 June 1098 they began to march out of the city. Everything depended on this desperate strategy. An amazed Muslim chronicler wrote: “The Franks, though they were in the extremity of weakness, advanced in battle order against the armies of Islam, which were at the height of their strength and numbers, and they broke the ranks of the Muslims and scattered their multitudes.”

Even secular historians admit that what happened during that battle can only be explained as a miracle. Raymond recorded: “In the beginning of the march out to battle, the Lord sent down upon all his army a divine shower, little, but full of blessing. All those touched by this were filled with all grace and fortitude, and despising the enemy, rode forth as if nourished on the delicacies of kings. This miracle affected our horses no less.”

An eyewitness who fought in that battle later wrote: “There came out of the mountains also countless armies with white horses whose standards were all white. And so, when our leaders saw this army they were entirely ignorant as to what it was and who they were until the recognized the aid of Christ, whose leaders were Saints George, Mercurius, and Demetirus. This is to be believed, for many of our men saw it.”

Many said that there were armies of angels and saints, as well as the spirits of fallen comrades, fighting alongside Bohemond and his troops. Against all odds, the Christians won a miraculous victory, and Antioch remained in Christian hands.