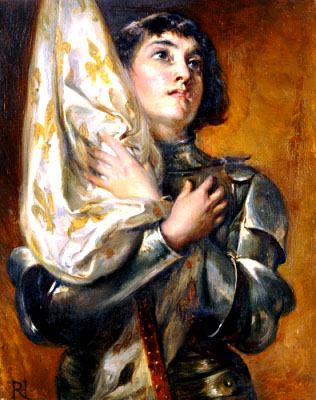 
St Joan of Arc is a figure known to almost everyone, so it is somewhat surprising to realize that she gained such fame in so short a period of time. Her mission began in the year 1428, and she won her greatest victory the following year. She was martyred only two years later, having accomplished her mission of saving France. She was not yet 20 years old, and yet her deeds were so significant that she is one of the patron saints of France, along with King St. Louis IX, St. Martin of Tours, St. Denis, and St. Therese of Lisieux.

After the French defeat at Agincourt in 1415, the English continued their victories until they gained the ascendancy against France with an important victory at Fresnay - le - Vicomte, killing 3,000 French soldiers while also capturing their commander. The victory forced Charles VI to allow King Henry V of England to wed his daughter Catherine, who intended to unite the two countries under English control by that marriage. King Charles was to recognize their son as the heir to the throne, disinheriting his own son, the Dauphin Charles. The French living in the unconquered heartland refused to go along with these arrangements, but they were the smaller region of what had once been France, and as Paris and Rheims were already under English control, they were in a far weaker position than their English adversaries.

King Henry V of France died unexpectedly in 1422, leaving his infant son as heir to the throne of England and those areas of France under English control. The death of King Henry was a blow to the English, yet they still had very capable generals who continued to win victories against the French armies. After a devastating loss at Verneuil in 1424, France was so weak that they were unable to even field another army.

When it seemed that only a miracle could save France, thirteen-year-old St Joan of Arc suddenly came upon the scene to change the world.

It was during the summer of 1425 when St Michael began appearing to Joan, eventually informing her that God had an important mission for her to accomplish. He told her that Saint Margaret and Saint Catherine would soon appear to her. The apparitions of these saints were so real that St Joan of Arc could touch them, and she often listened to their instructions while hugging them about their legs. After instructing Joan the Maid for three years, they revealed to her the mission for which God had chosen her. She was responsible to see that the Dauphin was crowned King of France!

Like Judith, who beheaded Halofernes of the Assyrians, God had chosen a weak and humble woman to shame the strong and save her nation.

St Joan of Arc was told to go to the knight Robert de Baudricourt, and ask him to officially send her to the Dauphin. Baudricourt listened to her request, but sent St Joan away, adding that her father should box her ears.

The next year, 1429, at the insistence of her guides, St Joan of Arc went back to Vaucouleurs, and again Baudricourt turned her down flat. One of his knights, however, Jean de Metz, listened to her when she explained why she had come back.

“I have come here to the royal chamber to speak to Robert de Baudricourt, so that he may take me or have me taken to the King; but he does not care about me or my words. Nonetheless, before mid-Lent, I must go to the king, even if I have to walk my feet off to my knees. No one else in the world can restore the kingdom of France, nor will the king have any help, except from me, although I would rather stay with my poor mother, for this is not my station in life. But I must go, and I must do this, because my Lord wants me to do it.”

Jean de Metz believed her, and soon Baudricourt was also convinced when St Joan of Arc told him about the French defeat at the battle of Rouvray several days before a courier brought the news.

St Joan of Arc met the Dauphin Charles in early March, and by means of revealing to him a secret known only to him and God, she convinced him that she was truly sent by God and gained his favor. Later the same month she sent the following letter to the Duke of Bedford:

“Jesus, Mary. King of England, and you duke of Bedford, calling yourself regent of France; William de la Pole, Earl of Suffolk; John Lord Talbot, and you, Thomas Lord Scales, calling yourselves lieutenants of the said Bedford…deliver the keys of all the good towns you have taken and violated in France to the Maid who has been sent by God the King of Heaven…Go away, for God’s sake, back to your own country; otherwise await news of the Maid, who will soon visit you to your great detriment…I have been sent by God the King of Heaven, to drive you, body for body, out of all France…If you will not believe the news sent you by God and the Maid, wherever we find you we will strike you.” 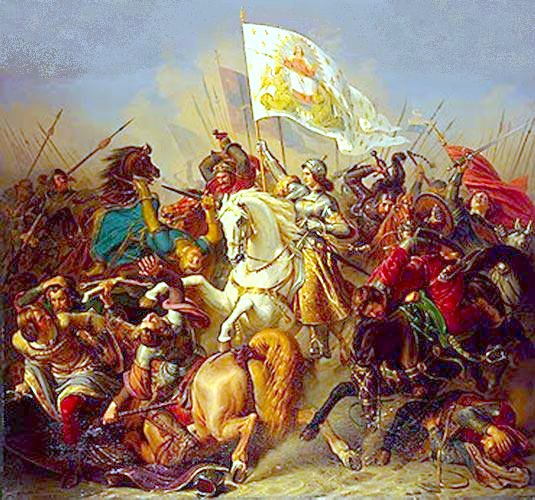 By late April Joan was riding with a small French army of 4,000 to attempt the relief of Orleans. She rode in full armor upon a white horse holding aloft her battle standard. That standard depicted Our Lord holding the world in his hand, with an angel kneeling on either side, and the names of Jesus and Mary proudly displayed.

The city of Orleans had been under siege for over half a year, and if it fell it would open up the conquest of the remainder of France. Joan and her army were able to enter the city to reinforce it. On May 4th Joan was suddenly awakened from her sleep by her voices, urging her to attack the enemy at once.

St Joan of Arc leapt upon her horse and rode through town gathering and inspiring her troops, and then led them against the English forces laying siege to Orleans. She first attacked Fort St. Loup, which her army defeated so badly that three-quarters of the English garrison were put to the sword. Next was Fort Augustins, and finally Fort Tourelles.

St Joan of Arc and her army attacked Fort Tourelles for 13 hours, and on one of the assaults Joan was wounded by an English arrow which she immediately removed by herself. When it seemed they were bested and about to retreat, Joan led a final charge carrying her gleaming standard that carried the day. The rest of the English army retreated the next day at the same time that Joan rode into Tours in triumph to meet the Dauphin.

Sir John Fastolf was approaching with a strong force. Too late to save the English at Orleans, he was ordered to advance to meet the French army where they were attacking the castle of Beaugency.

Once again, they arrived too late, and met the remainder of the English forces as they were in full retreat after Joan’s latest victory.

Joan, who was actively pursuing the English, came upon the retiring force and Sir John Fastolf’s army in a disorganized condition on the open field, so she seized the opportunity and ordered her army to attack the English.

“You have spurs, use them!” she ordered.

The French attacked with such vigor that it didn’t matter that they were a mere rabble challenging two of the finest commanders the English possessed. The battle was over in moments, with 2,000 English dead, 200 taken captive, and Lord Scales and Lord Talbot captured. In an amazingly short period of time, the situation in France had completely changed. 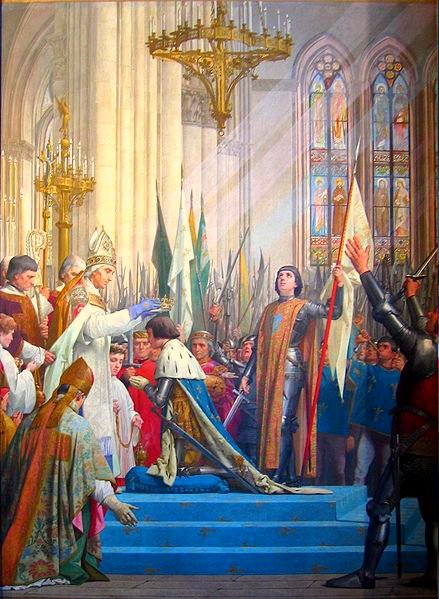 On Sunday, July 17, 1429, St Joan of Arc stood with the Dauphin at Reims cathedral at his coronation. Weeping for joy, she told him:

“Gentle king, now is executed the pleasure of God, Who wanted the siege of Orleans to be raised, and Who had brought you to this city of Reims to receive your holy consecration, showing you that you are the true king, and that the kingdom of France belongs to you.”

St Joan of Arc had thus completed what God wanted her to accomplish for France, though her greatest battle still lay before her. It was one she would fight alone.

The new king did not want Joan to continue engaging the English, and so did not support her as she continued to fight in minor battles. Joan was warned by her voices that she would soon be captured, and it was at Compiegne where she was pulled from her horse and taken captive. She was then sold to the English, who intended to have her tried for imaginary crimes and heresy.

For three months Joan was subjected to intense interrogation by Bishop Cauchon and his staff, who never intended to give Joan a fair trial, as he was merely a tool of the English. Joan had mercy even for this man who so hated her, telling him at one point:

“You say that you are my judge; beware of what you do, for truly I have been sent by God, and you are placing yourself in great danger.” 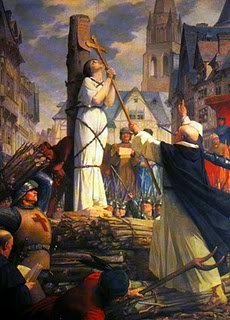 In a scene that must have been most terrifying for Bishop Cauchon (if he had any conscience left at all), at one point Saint Joan of Arc looked him directly in the eye and said:

“Bishop, I die through you.”

St Joan of Arc prayed, and then was fastened to the stake. She asked for a cross when the wood was set ablaze all about her, and died with the name of Jesus on her lips.

Joan's body was consumed by the flames, except for her heart, which remained perfectly intact. One is left to wonder if God permitted that courageous heart, which could not be defeated, to remain as her only witness. A condemnation to her murderers, it was thrown into the river, as if that could somehow wash away the truth. The King of England’s secretary fled from the scene shouting, “We are lost; we have burned a saint!”

Indeed, the English were lost. In was not long before they were completely driven from France, excepting the region around Calais. When England later left the Church under King Henry VIII, they did not take the French with them into the darkness of schism. The conclusion of the farcical trial was later justly overturned, and St Joan of Arc was declared a saint by Pope Benedict XV.