Our Lady of Guidance 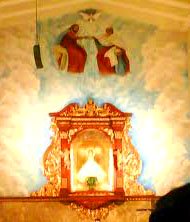 Our Lady of Guides


Our Lady of Guides is also known as Our Lady of Guidance, or in Spainish, Nuestra Senora De Guia. She is currently displayed in the Ermita Church, and is the patroness of Manila.

One of the sailors to land on the island of Luzon in 1570, while walking in the woods near the native settlement of Manila, came upon a religious ceremony held by the Natives. They were honoring an image of the Mother of God, a statue on a rough pedestal. The natives told the Spanish that the statue had the power to make their petitions come true, and indeed, miracles were performed.

Since nothing of the origin could be learned, the sailors determined to name the statue by some “Lady Title”; the lot fell upon “Our Lady of Guidance”; everyone agreed she had guided them on their dangerous journey.

Our Lady of Guidance

When the cathedral at Manila was built the statue was enshrined there. A hundred years later, this cathedral having been destroyed, a new church was built, and it is visible from the sea. In its high tower a light was set as a beacon to incoming ships, a fit place for Our Lady of Guides. Later the statue was placed within the walls of the restored cathedral.

As to the mysterious nature of the statue's unknown origin, some think the statue floated in from a wrecked ship, and was so seized by the natives.

The statue of Our Lady of Guidance was canonically crowned in the year 1955 by the Papal Nuncio to the Philippine Islands. The shrine is visited by laborers seeking employment in many countries, and when they return they leave gifts of thanks for the Queen of Heaven before her statue.

Today the devotion to Our Lady of Guides still flourishes. For all of us who travel this wide lonely world, she is the patroness, the Queenly Lighthouse, the Star of the Sea.

Return to Roman Catholic Saints Homepage from Our Lady of Guidance