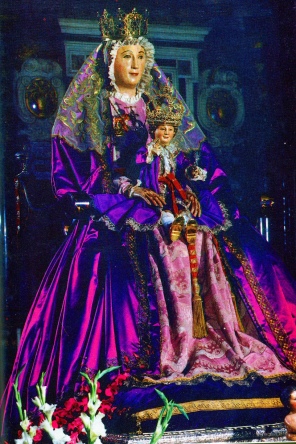 Virgin of the Kings

The Virgin of the Kings


In the year 1248, King Saint Fernando III of Leon and Castile was laying siege to the city of Seville. The long months of sacrifice and constant labor dragged on one after another, a continuous ordeal that seemed never ending. With the coming of summer, the trial passed almost beyond human endurance. Men literally died from the stifling heat, and the “severe conditions gave the impression that boiling air had been sent up from the pits of hell.”

As if this new affliction were not enough, at the same time a deadly sickness struck Fernando’s camp that also began to take the lives of many of his men. One of those who died was Don Gonzalo Ruiz Giron, the king’s chamberlain, personal advisor, and more than anything else, his close friend. To lose such a friend, for King Fernando, “was like watching the last line of land disappear on the horizon, and finding himself suddenly alone between the sky and the open sea.” These severe trials “...had a demoralizing effect on Fernando’s spirit, submerging him in a deep anguish that he had never before experienced.”

This was the beginning of Fernando’s dark night of the soul, as for the first time in his life he was experiencing grave personal doubts, and a severe spiritual conflict that included feelings of utter despair and complete isolation. King Fernando had only to look around himself to see how his knights were fighting for their lives in daily combats, suffering from incredible heat and privation, sickened and dying from the malady that had struck his camp. “He, who had always been energetic and optimistic in human affairs, and full of faith and hope spiritually, had always been able to face situations that others would have considered desperate, without the slightest mistrust in God’s help ever entering his mind.” Now it was different.

Fernando’s second wife, Queen Joan, knew her husband well. Although Fernando tried to hide his sufferings behind a confident smile, she felt certain he was enduring a great trial, perhaps the greatest of his life. She made it her duty to help him through this crisis, and to see him at peace once again.

Dona Joan had always known of her husband’s special devotion to the Blessed Virgin Mary. She sent a message requesting that the finest artist in the entire kingdom be sent to her to create an image of Our Lady more beautiful than any he had ever seen.

After a while, two young artists arrived, stating that they had responded to the summons. Dona Joan found a private room in an old tower for them to work. A guard was set to keep the artists safe from Muslim attacks, and the pair kept their door locked from the inside as they went about their work.

The day finally came when the artists sent a message for the Queen to come and view their work. Responding at once to the work room, Queen Joan was dismayed to find that there was no response to her knocking, and that the door remained locked from the inside.

When the door was finally forced, no sign of the artists remained. There was only the completed statue, a statue of regal beauty that surpassed all other known images of the Blessed Virgin Mary. Dona Joan knew at once that the statue had not been made by human hands, for only angels could have vanished from that locked work room, and only angels possessed the wisdom and skill necessary to have produced such a wondrous work of art.

In a state of astonishment and awe, Dona Joan knelt before the image of the Queen of Heaven, an image that would soon become known as the Virgin of the Kings.

The statue needed only a gown. Queen Joan desired to use a costly, rare and beautiful silk. Dona Joan and her maids sewed the garments while goldsmiths in Toledo prepared exquisite golden crowns for the Blessed Mother and her Child. The statue was then secretly taken during the night to the chapel while King Fernando completed his turn at the night watch.

The following morning King Fernando went to Mass and observed the statue at the altar. Fernando “was enraptured by the appearance of the Lady he was allowed to contemplate,” and Queen Joan was delighted with the joy the image gave to the king.

However, the difficulties the army faced continued without respite, and so did Fernando’s dark night of the soul. Finally one evening when King Fernando went to the chapel to pray, he lay prostrate on the floor before the statue of the Virgin.

“Help me and defend me! Thou art the Mother of Mercy. So, dost thou not see, my Lady, how these thy sons are in very great toils and combat and sufferings of hunger, illnesses and deaths, so many and such that they can endure it no longer? Dost thou not see, Lady, how the devil attempts to sow doubts in me that I will not make thee Queen of this city of Seville, where so many of thy sons and servants loved thee so much? Was it, then, only a figment of my imagination when I saw Saint Isidore and from his mouth heard that it was the will of Christ thy Son that I should conquer Seville? I beg of thee as intently as I can, as I do not seek or want anything but His glory and service, that thou wouldst give me a sign by which I might know for certain that He receives pleasure in this enterprise in which we are, and with this certainty, thou well knowest my Mother and sweetest Lady, that I will never tire of it, nor could anything stop me – neither death nor riches, nor even the forces of hell because grace would not be lacking.”

Desiring to look upon the sweet face of his heavenly Mother, Fernando got up to kneel as he continued to plead for relief.

“Thou wert always, Lady, my help, and thou tookest me out of all of my troubles...Why dost thou now let me suffer like this? Remember, Lady, Cordoba and Jaen and of all my conquests that were made with thy grace...It is true that I have committed many sins and well deserve these sufferings; but they are suffered not only by me, but by my vassals, and watching them causes my grief to become immense. Queen and Mother of Mercy, help me!”

Fernando beheld the image of his Mother through tear filled eyes, and it seemed the Virgin’s head inclined slightly toward him. Shadows and darkness can at times make an image look distant and somehow sinister, yet the features of the Holy Virgin appeared even more endearing and motherly than usual in the flickering candlelight. Then, Fernando discerned another subtle change as the lips of the statue moved and a delicate smile graced the beautiful face of Our Lady. Fernando gazed in ecstasy as he saw the lips form the syllables of his name as she softly called:

“What dost thou want of me, Lady?” Fernando answered without hesitation.

“You have a constant helper in my image of the Virgen de la Antigua that you love so much and which is in Seville.”

Then there was a brief silence as Fernando continued to behold the breathtaking beauty of his heavenly Mother. Finally, she gave her devoted son the answer and consolation for which he had been waiting:

“Continue, because you shall win.”

Encouraged by the Mother of God, Fernando did carry on with the siege of Seville, and in November of 1248 the city was finally conquered. The Virgin of the Kings was solemnly enthroned in the Cathedral of Seville and there she remains to this day. She is reposed above the incorrupt relics of her devoted servant, St. Fernando III, King of Castile and Leon.

*From the book "St. Fernando III, A Kingdom for Christ" by James Fitzhenry