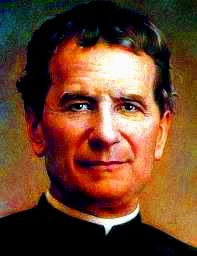 
St John Bosco, considered one of the greatest saints of modern times, was born in a Piedmontese village in 1815. When he was 2 years old he lost his father, a humble peasant farmer, and he was brought up by his saintly Tertiary mother, Margaret. It was no doubt due to her example and influence that John too joined the Third Order of St. Francis.

Even as a youngster, John recognized that it was his vocation in life to help poor boys; and he began to teach catechism to the boys of his own village and bring them to church. Acrobatic stunts and conjuring tricks were the means he used to get them together.

At 16 he entered the seminary at Chieri. He was so poor at the time, that the mayor contributed a hat, the parish priest a cloak, one parishioner a cassock, and another a pair of shoes. After he was ordained a deacon he passed on to the seminary in Turin; and there, with the approbation of his superiors, he began to gather together on Sundays poor apprentices and waifs of the city.

Not long after his ordination to the priesthood in June, 1841, he established what he called a Festive Oratory, a kind of Sunday school and recreation center for boys, in Turin. His mother came to be his housekeeper and mother of the Oratory. Two more Oratories in the same city followed. When Father John Bosco's mother did in 1856, the Oratories housed 150 resident boys; and there were four Latin classes and four workshops, one of them a printing press. Ten young priests assisted Father John in his work. Father John was also much in demand as a preacher; and he spent half of his nights in writing popular books in order to provide good reading.

There were many lean times for the saint, although God always provided. One time the local baker refused to give Father John further credit, and the boy who had gone for the rolls returned with only 15 rolls for over 300 boys. The boys got in line as Father John began to distribute to rolls, one to each boy. He continued to draw out fresh rolls until each of the boys was fed. The last boy in line counted how many rolls remained in the basket, and found there were 15.

St John Bosco's confessor and spiritual director was the Tertiary priest Saint Joseph Cafasso; and Father John too gained the reputation of being a saint. Miracles, mostly of healing, were attributed to him. By his kindness and sympathy and his marvelous power of reading the thoughts of his boys, he exercised a profound influence upon his charges. He was able to rule them with apparent indulgence and absence of punishment, something the educationists of the day could not understand. When necessary, he was known to bilocate even to distant places to help care for his boys.

St John Bosco himself admitted that God had given him the ability to discern hypocrites, as the saint stated that when one of these boys came near him he would be overcome by a sickening odor, as if the sinners darkened soul gave off the stench.

St John Bosco also had the gift of prophesy. One day he told his boys in school: "Let us be ready for death, for before a month is over one of us has to appear before God." One of the boys died later that month of blood poisoning caused by an insect bite.

In 1854 St John Bosco founded the religious order of Salesians, so called in honor of St Francis de Sales. Its members devote themselves to the education of poor boys. The new society grew rapidly. Father John lived to see 38 houses established in the Old World and 26 in the New World. Today it is one of the largest orders of men in the Church.

St John Bosco also founded a sisterhood called Daughters of St. Mary Auxiliatrix; and he organized many outside helpers into the Salesian Co-operators, who are pledged to assist in some way the educational labors of the Salesians. Prior to Vatican II, they totaled 800,000. 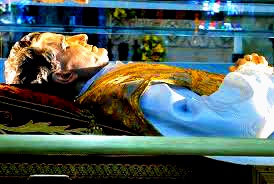 Father John's last great work was the building of Sacred Heart Church in Rome, a task which was entrusted to him by Pope Pius IX after it has seemed to be a hopeless project. The holy priest, who was everywhere acclaimed as a saint and wonderworker, gathered funds for the church in Italy and France; and somehow he succeeded where others had failed. But in doing so he wore himself out.

On January 31, 1888, he was called to his reward. Forty thousand persons came to pay their respects as his body lay in state in the church at Turin; and his funeral resembled a triumphal procession.

A DVD telling the story of St Don Bosco can be obtained by clicking here. This information is being provided for your benefit, and I have no financial interest in the transaction. Thank you.