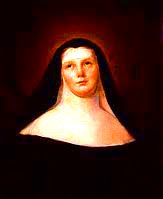 
St Angela Merici was born in the year 1470 at Decenzano, northern Italy, on the banks of Lake Garda. Even as a child she served God very fervently. She so loved modesty and purity of heart that she was quite generally venerated as a little saint in her native town.

When she was in her 13th year she entered the Third Order of St. Francis, and soon afterward took the vow of perpetual chastity, renounced all her possessions, and wished to live only on alms.

Along with this St Angela Merici practiced great austerities, slept on the bare earth, and fasted continuously on bread and water. Sometimes Holy Communion was her only food over a period of several days.

When St Angela Merici was 23 years old, Angela was praying one day in a secluded place, and there she had a vision of a friend who had died a short while before. Her friend prophesied that Angela would be the foundress of a religious institute which would be devoted to the education of youth, and destined to do an unlimited amount of good for the kingdom of God. That proved to be a great incentive for Angela, not only to lead a life of contemplation, but also to serve her fellowmen in active work.

St Angela Merici gathered about her a group of young women, and together they went out to give religious instruction to little children, to help the poor, and to care for the sick. Often there were great sinners among those to whom she ministered, and in such cases she did not cease instructing, entreating, and encouraging them until they were reconciled with God and began to lead a new life.

Her saintly conduct and the profound knowledge she had, concerning even the most difficult questions of theology, caused her to be greatly respected by high and low and to be regarded as a saint. In order to escape such honor, Angela left her native town of Decenzano in 1516, and went to Brescia, where a wealthy but pious merchant offered her a house. There she lived absorbed in God until the year 1524.

At that time Angela was seized with an ardent desire to visit the Holy Land, just as St. Francis of Assisi once was. She visited Jerusalem, Mt. Calvary, and the other holy places with uncommon devotion. She returned by way of Rome, in order to pray at the tombs of the apostles, and thus gain the great jubilee indulgence.

Pope Clement VII, who was not unaware of her sanctity, wished to detain her in Rome, and did not permit her to return to Brescia until he understood by divine inspiration that in Brescia lay the field of labor for which God had destined her.

Due to disturbances caused by war, St Angela could not undertake her appointed work until 1531. On November 25, 1535, her pious society was founded as the religious congregation of St Ursula, who was the special patron of their work. The congregation, known also as Ursulines, spread rapidly and is active in many countries, also in America, where its institutions for the Christian education of feminine youth are blessed with much success. 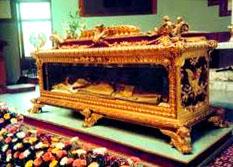 When Angela reached the age of 70, the day and hour of her death were revealed to her. While on her deathbed she counseled:

"Whatever you would wish at your dying hour to have done in health, that do now while you may."

She received the last sacraments with great fervor, and was rapt in ecstasy. While pronouncing the holy name of Jesus, she departed this life on January 27, 1540, in the very hour that had been foretold to her.

She was laid out in the habit of the Third Order, holding in her hand the pilgrim's staff she had used in the Holy Land. Thus she reposes in a side chapel of the parish church of St. Afa in Brescia. Pope Clement XIII beatified her, and on March 24, 1807, Pope Pius VII canonized her in St. Peter's Church, Rome.