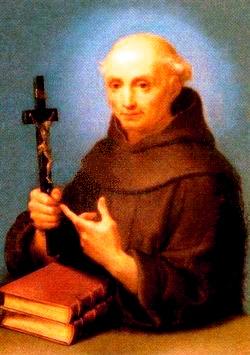 Saint Thomas of Cori was born at Cori near Valletri in the Roman Campagna in the year 1655, and in baptism received the name of Francis Anthony. His parents were poor shepherds, but very pious Christians, who by their virtuous teaching and good example reared their children in the fear of God.

It seemed that little Francis Anthony had in a very special manner inherited the gift of piety from them. Saint Thomas of Cori's innocent demeanor and fervent devotion so distinguished him among his companions that he was quite generally called “the little saint.”

Saint Thomas of Cori pursued his higher studies with great diligence and success in a school conducted by a devout canon of his native town. However, the poverty of his parents soon compelled him to discontinue his studies and to return to his father’s flocks. But even in the quiet pastures amid the cliffs and the woods, he never desisted from prayer and study.

When both of his parents had died, Thomas sold the flocks which he had inherited from them, presented the proceeds to his two sisters for their dowry, and then asked to be admitted to the convent of the Friars Minor at Cori.

Saint Thomas was received in February, 1677, and was sent to the novitiate at Orvieto, where he was invested under the name of Thomas. With redoubled fervor he progressed “from virtue to virtue.” At Viterbo and Velletri he studied philosophy and theology with marked success, and finally, when he was twenty-eight years old, he celebrated his first holy Mass amid tears of devotion and joy in the convent at Velletri.

After he had spent some time at Orvieto filling the office of novice master with much zeal and success, he begged his superiors to allow him to retire to the exceptionally strict convent of Civitella near Subiaco, situated in a wild mountainous solitude, in order to sacrifice his life to God in strict penance, ceaseless prayer and work. Later on, when he was appointed superior of this house, he instilled into his brethren such love for religious discipline that Civitella soon became the model convent of the province.

On one occasion while here, Saint Thomas was distributing Holy Communion when he went into ecstasy and flew to the roof of the church so rapidly that it was feared he must have struck his head. A short time later he returned to the ground unharmed.

Saint Thomas developed his companions into a band of zealous and courageous men, who traveled as missionaries to India and to China. One of them received the crown of martyrdom. His ardent wish to go with them was never fulfilled. Instead, the provincial superiors assigned him the Roman Campagna and the desert mountain region of Subiaco as his permanent field of labor. Here Thomas labored with the fiery zeal of a Paul for the space of twenty years, so that he was generally called the apostle of Subiaco.

When there was question of gaining souls, no journey was too distant or wearisome. Snow and rain, heat and cold, fatigue and vigils, hunger, thirst, and the painful wounds which the sharp stones made in his bare feet, were borne by him with holy joy. As a reward for all this hardship, he saw great bands of sinners approach in order to be reconciled with God through him, who was at the same time gifted in reading hearts. He was often compelled to spend whole days and even nights without interruption in the holy tribunal of penance.

Here it was also that, as a seventy-four-year-old man, Thomas was attacked by a severe hemorrhage, which brought him to his deathbed. With heavenly patience and amid continuous prayer, he continued to suffer severe pain for several days, until, with the Crucifix in one hand and an image of the Blessed Virgin in the other, he went to his eternal reward while pronouncing the holy names of Jesus and Mary. It was on the day at the hour he had himself foretold, January 11, 1729.

His body reposes before the high altar in the convent church of Civitella. Pius VI beatified him on August 18, 1786, and he was made a saint by Pope John Paul II in 1999.