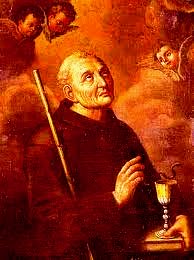 Saint James of the March

James was born in the March of Ancona. His parents raised him in the fear and love of God, and in due time he was sent to the University of Perugia, where he studied civil and canon law with such remarkable success that he received a doctor's degree in both subjects.

Despite the fact that brilliant positions were already open to him, Saint James of the March soon recognized the vanity of the world and felt a singular attraction for the religious life. At first he thought of joining the contemplative Carthusians, but almighty God, who had destined him to labor for the salvation of thousands of souls in the active life, led him to the Order of St Francis.

During his novitiate James distinguished himself by the practice of all virtues, so that he became a model of religious perfection. In order to preserve angelic purity, which he had kept unsullied from his youth, he led a most austere life. He never slept more than three hours, and that on the bare floor; the remainder of the night he spent meditating on the sufferings of Christ. He constantly wore a coat of mail having sharp points. and scourged himself daily; like his holy Father St Francis, he observed a 40-day fast 7 times a year. Bread and water were his regular fare, although he sometimes added uncooked beans or vegetables. Some years later, St Bernardine of Siena prevailed upon him to mitigate these austerities somewhat in order to conserve his strength.

Soon after his ordination, when he was 30 years old, Saint James of the March was sent out as a missionary. He undertook this high calling with untiring zeal. For more than 50 years he traveled through Italy, Dalmatia, Croatia, Albania, Bosnia, Austria, Bohemia, Saxony, Prussia, Poland, Denmark, Norway, Sweden, and Russia. During the years 1427 and 1428 he preached in Vienna, Augsburg, Ratisbon, Ulm, Limburg, Brandenburg, and Leipzig.

Inspired by his apostolic example, more than 200 of the noblest young men of Germany were impelled to enter the Franciscan Order. The crowds who came to hear him were so great that the churches were not large enough to accommodate them, and it became imperative for him to preach in the public squares.

At Milan he was instrumental in converting 36 women of bad repute by a single sermon on St. Mary Magdalen. It is said that he brought 50,000 heretics into the bosom of the Church, and led 200,000 unbelievers to baptism. In addition, God granted St James such wisdom, that popes and princes availed themselves of his services, seeking counsel from him. He possessed the gifts or miracles and of prophesy in great measure, yet his humility surpassed all those distinctions.

He was offered the archiepiscopal dignity of the see of Milan, but he declined with these words:

"I have no other desire upon earth than to do penance and to preach penance as a poor Franciscan."

Worn out by his many labors as well as advanced age, he died at Naples, November 28, 1476, in the 85th year of his life, 60 years of which were consecrated to God in the religious state. He was entombed in the Franciscan church at Naples, where his body can still be seen in a crystal coffin, incorrupt, flexible, and emitting a fragrant perfume.

Pope Benedict XIII canonized Saint James of the March in 1726.