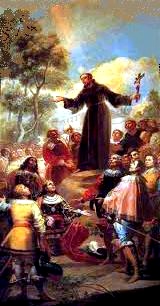 St Antoninus, archbishop of Florence, begins the biography of Saint Bernardine of Siena with the words, "The grace of God, Our Savior, has appeared in His servant Bernardine, who shone like a bright star in a dark night, and with the heavenly brilliance of his virtue and doctrine frightened away the darkness."

The great saint, Saint Bernardine of Siena, descended from the old knightly family of the Albizeschi of Siena, and was born on September 8, 1380, in the town of Massa, a dependency of Siena, where his father was governor.

When Saint Bernardine of Siena was only 7 years old, he had lost both his parents, but he was reared in the fear of God by devout relatives. He evinced a great love for the poor, with whom, as a little boy, he gladly shared his food. He attended divine services with the most edifying devotion, and listened to sermons with such attention that he could repeat them to his companions.

Saint Bernardine of Siena loved purity above all the virtues. While he attended the secondary school in Siena, he could not hear an unbecoming word without blushing for shame, so that those who spoken it themselves blushed. When any indecent conversation was going on among his companions, they stopped as soon as they saw him coming. "Be still," they said, "Bernardine is coming."

While the holy youth was otherwise very meek, he was friendly to all, he could nevertheless grow extremely angry if decency was violated. A prominent citizen once purposely told him something indecent in the open market place. Bernardine gave him a resounding slap in the face, and amid the laughter of the bystanders the disgraced citizen had to withdraw.

With his great love for purity, Bernardine united a tender devotion to the Blessed Virgin, whom he used to call his beloved. Out of devotion to her he daily visited an image of Mary just outside the town of Siena; he prayed there especially to learn his vocation. The Mother of Grace, who had protected him in the world, now led him to the sanctuary of the convent.

In the quiet little convent of St Mary Colombaio, which St Francis himself had founded, Saint Bernardine of Siena received the holy habit on the feast of the Nativity of Mary in the year 1402. On the same feast in the following year, he made his profession, and after he was ordained and appointed to preach, he also gave his first sermon on the feast of Mary's nativity.

Saint Bernardine of Siena was a close personal friend of Saint John of Capistrano, who instructed him in theology, and also Saint James of the Marsh. Since Saint Bernardine's voice was very weak and hoarse, however, he seemed ill-fitted for the office of a preacher. Yet here, too, his beloved Mother helped him. At her intercession his voice suddenly became so powerful and melodious that he became one of the most distinguished missionaries.

Now he journeyed all over Italy in order to announce to the people the virtues and vices, and the reward of the former and punishment of the latter. In many places such depravity existed that he found it necessary to preach sermons which he himself called sermons for heathens. The effects, however, were so astounding that Pope Pius II compared him with the Apostle of the Gentiles and called him a second Paul. After he had shaken their truths, he poured into them the soothing oil of the sweet name of Jesus, our Savior and Redeemer, and preached on Mary, the Mother of Mercy.

His blessed ministry induced many towns to seek him as their bishop. Siena, Ferrara, and Urbino petitioned in turn for this privilege, and the pope offered Bernardine the Episcopal dignity. But with unchanging humility, he declined every time. He remained among his religious brethren whom he encouraged in religious perfection.

Rich in merits and virtue he died at Aquila on May 20, 1444. The body of St Bernardine was solemnly exhibited for twenty-six days after his death. On the twenty-fourth day a copious amount of blood issued from his nose, as was observed by all and recorded by no less a personage than St John Capistrano.

Pope Nicholas V canonized St Bernardine of Siena 6 years after his death, whereupon the citizens of Aquila built to his honor a beautiful church with a magnificent marble tomb.

Return to Our Lady of the Star Page in Marian Calendar