Our Lady of Treves 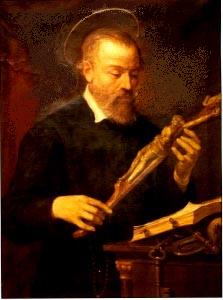 St. Jerome Emiliani, founder of the Congregation of Semasca, when still a layman, experienced in a marvelous way the mercy of Our Blessed Lady. A capable soldier, he was once entrusted with the defense of Castelnuevo, in Fruili, Italy, when this was stormed by the Venetians, who were commanded by Maximilian I. Jerome was captured and confined in a dark prison, where he was loaded with chains.

Being a man of many vices, he began to feel remorse for his past life, almost to the point of despair. Then, he thought of Mary, the Mother of God, as the Mother of Divine Mercy. To her he turned, promising to lead a better life in the future, if this loving Mother would deliver him from his miserable condition. In an instant, Jerome beheld his prison filled with light, and the Virgin Mary descending from Heaven to loose with her own hands, the chains with which he was bound. Moreover, she handed him a key with which to open the door of the prison and escape. Eluding his captors, he directed his steps toward Treves, to the shrine of the Mother of God.

Our Lady of Treves

When he arrived in Treves, he prostrated himself before the image of Our Lady and laid on her altar the instruments of his torture. He then retired to a life of penance until God sent him companions to start his order, also known as the Company of the Servants of the Poor. He was especially concerned with the souls of homeless orphans, and so he established orphanages to care for them. He always exhorted not only these, but all with whom he came in contact, to reverence the powerful Queen of Heaven by often reciting the “Haill Holy Queen” and other Marian hymns. St. Jerome Emilani died a holy death in 1537 while caring for the victims of plague. Pope Benedict XIV proclaimed him a saint in the year 1767.

The cathedral of Treves is also famous as the location where the “Holy Coat” is exposed for veneration. This is the same that is piously believed to have been worn by Our Lord Jesus Christ, and is the seamless garment for which the soldiers cast lots on Calvary during His passion and death.

Return to Titles of Mary from Our Lady of Treves

Return to Marian Calendar January from Our Lady of Treves

Return to Roman Catholic Saints Homepage from Our Lady of Treves