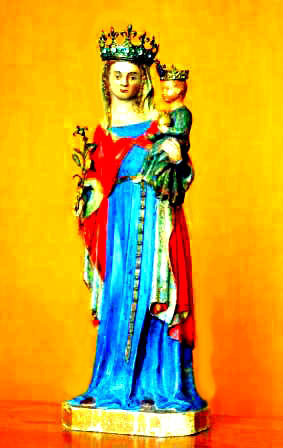 Our Lady of the Thorn

Our Lady of the Thorn

On the night of the Feast of the Annunciation, March 24 in the year 1400, some shepherds tending their flocks were attracted by a bright light coming from the Chapel of Saint John the Baptist near Chalons, France. As they approached the light they saw that it was actually a thorn bush fully engulfed in flames, and they discovered a statue of the Blessed Virgin standing unharmed in the midst of the flames. In fact, though the fire burned brightly, the branches and leaves of the thorn bush were unaffected by the flames.

The miracle continued all that night and into the next day, and news of the miracle spread quickly. Mobs of people crowded around the burning bush that was so reminiscent of the one witnessed by Moses on Mount Horeb. The Bishop of Chalons, Charles of Poiters, also witnessed the burning bush and the miraculous statue – both still unaffected by the fire.

When the flames finally did die down, the bishop reverently took the statue and carried it in his own hands to the nearby Chapel of Saint John. On the very site of the miracle, construction of a church was begun for the enshrinement of the miraculous statue. Since the church was built so rapidly – in a little over 24 years – a charming local legend claims that angels continued the work at night after the laborers had left for home.

Our Lady of the Thorn (Notre Dame de l’ Epine) became a place of pilgrimage very rapidly. Today, a minor basilica, the shrine proved to be so beautiful that the people considered it a worthy place to venerate the Blessed Virgin. The flamboyant Gothic church boasts majestic great doors, a splendid rosette decorating the principle entrance and two chiseled stone spires, rises high and imposing on the plain in Champagne.

During the terrible French Revolution, the statue of Our Lady of Thorns was removed from the main altar and hidden for safekeeping. After it had ended, the statue was brought back out for veneration.

Many healings have also been reported at the shrine, many verified by physicians. The beautiful church of Our Lady of the Thorn has been recognized by several popes, including Pope Calixtis III, Pius II, and Gregory XV. Pope Leo XIII ordered the solemn coronation of the miraculous statue, saying, “Yes, Our Lady of the Thorn will be crowned in my name. Prepare for her a diadem worthy of the Mother of God and the people whom she protects…”

It is a place of grandeur where Christian souls can expand in adoration of the Son of God, and many are the pilgrims of all descriptions who have visited the shrine over the years, including Saint Joan of Arc in 1429.

Return to Marian Calendar February from Our Lady of the Thorn

Return to Titles of Mary from Our Lady of the Thorn