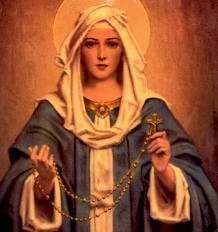 Our Lady of the Rosary

October 7: Our Lady of the Rosary


In the year 1571 the Moslem Empire of Asia, the Ottoman Empire, had reached a point of great power and military might. Spurred on by the desire for conquest, as well as by hatred of the Christian cross, the Moslem forces had attacked and overcome the outer bastions of the Christian world, and were now making threatening gestures at Italy and the Christian countries bordering the western Mediterranean Sea. Information was at hand that a huge Moslem fleet stood poised and ready to attack.

Pope Saint Pius V, recognizing the danger, organized a papal fleet and found a brave and brilliant commander, Don Juan of Austria, to take command. In the early days of October 1571, he sailed to meet the enemy and encountered them in the Bay of Lepanto. Although the Christian troops were heavily outnumbered, skill in maneuver, together with the bravery of the Christian troops, brought about a great victory and the Moslem fleet was all but destroyed.

Our Lady of the Rosary

Before and during the decisive battle, the Christian world lead by Pope Saint Pius V, invoked the Blessed Virgin in a special way for her assistance; and they were convinced that the victory at Lepanto was a result of Mary’s help. The Pope proclaimed a special feast in honor of Our Lady of Victory, to be celebrated on the first Sunday of October.

Two years later Pope Gregory XIII changed the name of this feast to that of the Holy Rosary, honoring the special prayer to which the victory was ascribed. The celebration of the feast is now observed on October 7, the date of the Battle of Lepanto. Out of this celebration arose the custom of dedicating the entire month of October to Mary and the Rosary, Our Lady of the Rosary, a custom highly sanctioned and approved by succeeding Pontiffs.

Pope Leo XIII, in more modern times, added to the Litany of Loreto the invocation: “Queen of the most holy rosary, pray for us.”

The devotion of the rosary is not only an important practice in the Church but it is a devotion singularly honored by having a special feast dedicated to it. The devotion of the rosary preceded the feast by centuries, and the institution of the feast was a glorious tribute to the power of the devotion. The origin of the devotion is probably the vision granted to St.Dominic in which the Blessed Virgin bade him use it as a means of overcoming heresy. Tradition tells us that the great Dominican beheld this vision in 1206 when he was mourning the inroads made by the Albigensian heretics. Later the signal defeat of these heretics at the battle of Muret in the same century was attributed to the recitation of the rosary by St. Dominic.

The weapons of war have changed drastically since the battle of Lepanto well over 400 years ago; but without doubt the spiritual weapon of the rosary remains as potent for winning the final victory; if only enough people will properly make use of it. At Lourdes and at Fatima Mary appeared to the favored children holding in her hands a rosary. She made it clear to them, and through them to the world, that the frequent and devout recitation of the rosary was the means by which the world could be brought back to God and lasting peace could be achieved.

Our Lady of the Rosary, pray for us.

Return to Marian Calendar October from Our Lady of the Rosary

Return to Titles of Mary from Our Lady of the Rosary