Our Lady of the Fields 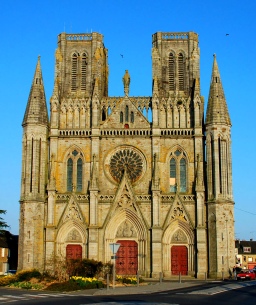 February 26: Our Lady of the Fields, Paris, France, consecrated by Saint Denis (250)

The title of Our Lady of the Fields, or Notre-Dame des Champs, and the devotion to Mary as such, takes us back to the earliest days of Catholic life in France.

Our Lady des Champs, at Paris, was dedicated in ancient times to Ceres. Saint Denis, to whom we owe a great deal of our traditional devotion to Mary, was the first Bishop of Paris. According to tradition he drove the demons from the Temple of Ceres, the pagan goddess of agriculture, and placed therein an image of the Madonna modeled after Saint Luke’s famous painting. The Temple was henceforth dedicated to the Blessed Virgin, whom Parisians have honored for centuries under the title of Our Lady of the Fields. It is said that a picture of the Blessed Virgin is still to be seen there, on a small stone, a foot square, which was made after that which Saint Denis brought to France.

This house, which is a Benedictine priory, was afterwards occupied by the Carmelites, who were received there in the year 604, and founded by Catherine, Princess of Longueville. It was the first occupied by those nuns in France; the mother Ann of Jesus, the companion of Saint Teresa, was its first superior.

If the Blessed Virgin were a goddess she would be a very human goddess – simple and approachable, forgetful of her privileges and of her beauty. Her constant humility adds to her charm. Saint Denis knew this well. He found her so gloriously beautiful that he gave to her the place in the temple – and in the hearts of the people – formerly held by the pagan goddess.

“I am the Flower of the Fields,” the Holy Ghost has the Blessed Virgin say. A flower of the fields has a simple beauty that charms us even more because it blossoms by itself without care or cultivation. Our Savior Himself marveled at such a flower and of it He spoke these words of praise that have been repeated through the centuries: “See how the lilies of the field grow; they neither toil nor spin, yet I say to you that not even Solomon in all his glory was arrayed like one of these.”

But lilies soon fade and roses are hardly open before they begin to shed their petals before the wind. The beauty of Mary is less perishable; it remains ever fresh and unchanged in the valley of our exile.