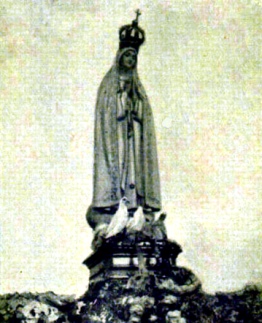 Our Lady of the Doves

February 10: Our Lady of the Doves


While the Pilgrim Virgin statue was touring Europe, three snow-white doves came unexpectedly as the procession passed through a tiny village. No one could be identified as their owner and they did not seem to be lost. They settled at the feet of the Madonna – soft, white doves, at home with Mary.

Day by day as the pilgrimage drew near its destination of Bologna, Italy, the doves stayed on. They left the statue only for short flights, and never all at once. No minute passed that at least one of them was not at Our Lady’s feet.

When the procession neared the cathedral where the statue was to be enthroned, conjecture was made about the possible action of the doves. Eager eyes watched them as strong arms carried the Madonna to her pedestal in the sanctuary. Softly, the doves hovered over, undisturbed by the noisy devotion of the crowd of Latin enthusiasts for Our Lady – in Italy.

When the statue was finally set firmly and left free to them once more, the doves returned to their resting place, as before, at the feet of Mary.

High Mass began at once. Through all the singing and incensing and preaching, the birds remained, watchful but not alarmed. Only as the Mass reached its climax at the Consecration did they stir. Then, as if by instinct, they left the statue and flew to the altar. Upon the high crucifix they perched for the rest of the Mass.

Then, at the “Ite Missa est,” with one accord they flew from the Church and vanished. The doves of Mary had escorted her, Our Lady of the Doves, to the palace of the King.

Earthly royalty selects eagles for insignia. Mary, Queen of Peace and Mother of the Prince of Peace, selects doves. This type of incident has occurred several times, at a variety of different locations, in recent history.

Return to Marian Calendar February from Our Lady of the Doves

Return to Titles of Mary from Our Lady of the Doves

Return to Roman Catholic Saints Home Page from Our Lady of the Doves
[?]Subscribe To This Site