Our Lady of the Bells 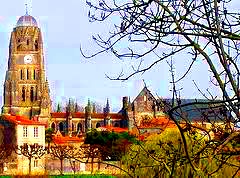 February 9: Our Lady of the Bells


“Saintes” is the English translation for the French word meaning female saints. There is a great deal of history to the Poitou-Charentes region of western France where the town of Saintes is located.

The town of Saintes was originally a thriving settlement in ancient Gaul located along the Charente River. The town became known as Mediolanum Santonum once conquered by the Romans under Julius Caesar, and the remains of the triumphal arch of Germanicus and a large amphitheatre can still be seen there today.

The town takes its name, Saintes, due to a fascinating legend that many still piously believe. According to this tradition, Mary Salome and Mary Jacob, accompanied by other disciples of Jesus Christ, were forced to flee the Holy Land about the year 45 AD. They left taking a boat with no sail, and were miraculously transported across the Mediterranean Sea, making land near the place which became known as Saintes Maries de la Mer.

Long before the arrival of the saints, indeed, since prehistoric times, Saintes Maries de la Mer (Saint Mary's of the Sea) had been considered a holy place. This tradition was carried on by the Celts and then the Romans. It is recorded that St Eutropius was a bishop there in the 3rd century, and that the first cathedral was reconstructed by no less a personage than Charlemagne. Norman invaders twice burned the town during the 9th century. Richard the Lionheart took refuge there against his father, and King Saint Louis IX defeated the English on the plains before the town. The Cathedral of Saint Peter, built in the 12th century, was severely damaged by the Huguenots in the year 1568. Its bishopric was ended in 1790 due to the oppression of the French Revolution. The church is now reduced to being only an historical monument.

Our Lady of the Bells

It is recorded, though, that one year long ago, on the octave day of the Purification, the bells in the Cathedral of Saintes, France, rang out most sweetly of themselves. The sacristans, having run to the church, saw what appeared to be several unknown men holding lighted tapers and melodiously chanting hymns in honor of the Blessed Virgin, Our Lady of the Bells, who was venerated in a chapel of this church. Approaching softly, they – the men who had run to the church – begged the last of these men carrying lighted candles, to give them one in proof of the miracle they had witnessed. The light-bearers graciously complied.

This taper, or candle, in remembrance of Our Lady of the Bells, is said to be preserved in that church up to this day.

Return to Marian Calendar February from Our Lady of the Bells

Return to Titles of Mary from Our Lady of the Bells