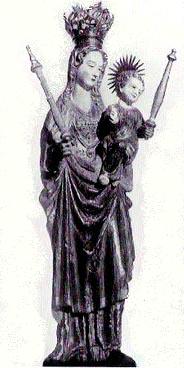 Our Lady of Sichem

The shrine in Brabant in the duchy of Louvain, is a replacement of the one below Mount Garizim, Israel. Hadrian restored the temple on Mount Garizim and dedicated it to Jupiter. A small Christian community settled there; and on several occasions they suffered greatly at the hands of the Samaritians. In 474 the emperor, to avenge an unjust attack on the sect, gave Mount Garizim to the Christians, who built on it a church dedicated to the Blessed Virgin.

After the Mohammedan conquest, Christianity practically disappeared from the district. The French made amends by erecting a shrine to Mary in the duchy of Louvain. The ancient statue of Our Lady of Sichem, or as Our Lady of 'Montaigu', which is the title more commonly used today, has been venerated in Belgium from very early times. The Mother of God rewarded the faithful magnanimously for their pious attention.

According to legend, a shepherd boy originally found the statue of Our Lady after it had apparently fallen from a niche cut in an old oak tree. The statue was mysteriously too heavy for him to lift alone, so he ran to find his master, and have him return to help him replace the statue in its place in the old oak.

It is said that in 1306 the Blessed Virgin Mary moved the hearts of the people by causing four drops of blood to flow from the eyes of the statue dedicated to her. This revived the faith of the people and increased their fervor.

A small chapel was built beneath the tree, which was rebuilt in 1602, and the dedication of Our Lady of Sichem took place in the year 1604 by the Archbishop of Mechlin, Mathias Hovius.

From that time forward there were many miracles as Our Lady seemed to demonstrate her appreciation by granting many favors. The statue was soon venerated as miraculous, and there have been many pilgrimages to the site during the centuries, continuing even until this day.

Return to January Marian Calendar from Our Lady of Sichem

Return to June Marian Calendar from Our Lady of Sichem

Return to Titles of Mary from Our Lady of Sichem

Return to Roman Catholic Saints Homepage from Our Lady of Sichem