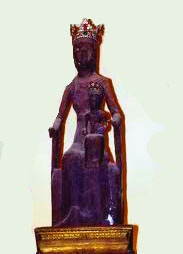 Our Lady of Rocamadour

September 24: Our Lady of Rocamadour


The pilgrimage of Our Lady of Rocamadour, a short distance from Cahors, is situated in the most sterile and mountainous part of Quercy. A saint, whom an unsupported local tradition would make the Zaccheus of the Gospel, about the third century, penetrated into a labyrinth of rocks which raise their lofty crests above the narrow and deep ravine where the Lauzou rolls its waters; this ravine, which is at this day named the valley of the Rocamadour , was then called the Dark Valley, and abounded in wild beasts.

This scenery, melancholy, but not without grandeur, which reminded one of Thebais, had doubtless some analogy with the deep and austere thoughts of the anchorite; he made himself a cell on one of the prominent peaks of the mountain, and hallowed out of the rock, on a level with the eagles’ nests, an oratory to the Mother of God, Our Lady of Rocamadour. The Gallico-Roman population of the fine valleys of Figeac and Saint-Cere, who sometimes perceived him from a distance on the sharp point of these bare and wild mountains, the height of which turns one giddy, surnamed him Amator Rupis; this name, the only one which has come down to us, was changed into that of Amador, then Amadour, as more congenial to the dialect of the South.

The little statue of the Blessed Virgin, Our Lady of Rocamadour, resembling those which the new Christians of Gaul venerated in the hollows of oak trees, was the instrument of miracles in favor of the fervent pilgrims who came to invoke her in her rocky sanctuary. The pilgrims multiplied, and soon became so frequent, that a town was built at the foot of the holy place. This town, situated in a desolate region, on a spot unproductive, and one of the most difficult of access at first, became nevertheless, thanks to the devotion of our fathers, one of the principal towns of Quercy; it had towers, consuls, and a coat-of-arms in which three rocks argent figured with lilies or, upon a field gules.

Above the steeple of the old church of Rocamadour, at a prodigious height, arose a citadel destined to protect the rich sanctuary of Mary; those bastions, the outlines of which were proudly traced against the clouds, and which now cover the soil of their ruins, could not repulse the gloomy followers of Calvin, who would have gone through hell itself for the sake of gold. The chapel of Our Lady of Rocamadour has now-a-days a better bulwark – its poverty.

This pilgrimage to Our Lady of Rocamadour was celebrated even in the time of Charlemagne; the famous knight-errant Roland, nephew of this emperor, came to Rocamadour in 778. He offered to the Blessed Virgin a gift of silver of the weight of his sword, and after his death in the fields of Roncevaux, this sword was brought to Rocamadour. (It is said the sword, Durandal, can still be seen there.)

In the year 1170, according to Roger de Hoveden, Henry II., King of England and Duke of Guienne, through his wife Eleanor, came to Our Lady of Rocamadour to fulfill a vow, which he had made to the Blessed Virgin in a long illness, with which he was attacked at La Motte-Gercei. As the lands bordering upon Quercy had no great liking for the Englishman, the island monarch protected himself with a small army to make this pious voyage. Henry left marks of his munificence at the chapel of Our Lady, and with the poor of Rocamadour.

In the number of illustrious pilgrims, who came to honor Mary in her mountain sanctuary, is reckoned Simon de Montfort, legate of the pope; Arnauld Amalric, who was afterwards Bishop of Narbonne; Saint Louis, accompanied by his three brothers, by Queen Blanche of Castile, and Alphonsus, Count of Boulogne, who ascended the throne of Portugal; King Charles the Fair, King John, Louis XIl, and a multitude of powerful lords.

Among the great bishops who visited, at different times, the miraculous chapel of Our Lady, we find one name so dear to literature, to humanity, and to Catholicism, that we cannot leave him among the crowd. This name, by which France considers herself honored, and which commands the respect even of impiety itself, is that of the swan of Cambray. Devoted from his cradle to Our Lady of Rocamadour, by his pious mother, Fenelon came more than once to pray, in the depths of Quercy, to her who had laid on his lips a comb of Attic honey, and given him the courageous wisdom which he employed so nobly in the instruction of kings. Two pictures, hung up as votive offerings, in the sanctuary of Mary, represent two solemn phases of his existence. In the first, he is newly-born, and sleeps in his cradle; in the second, being a young man, and already a doctor, he comes to pay homage to this divine Protectress, for the first success of his rising genius. At some distance is a tomb, over which he wept and prayed later on – that of his mother, whose wish was to sleep her last sleep in the shadow of the altar of Mary, Our Lady of Rocamadour.

Sometimes it was not merely isolated pilgrims, but cities and provinces in a body, who repaired to Rocamadour. “In 1546,” says M. de Malleville, in is Chronicles of Quercy, “on the 24th of June, the day and feast of the blessed Sacrament and of Saint John, was the great pardon of Rocamadour. The concourse of people of the kingdom, and of foreigners, was so great, that several persons, of all ages and of each sex, were smothered up in the crowd, and a very great number of tents were set up in the country, on all sides, like a great encampment.

The gifts received by the sanctuary of Rocamadour were of great magnificence. Among them appears the forest of Mont-Salvy, given in 1119 by Odo, Count of La Marche, “to the Blessed Mary of Roc-Amandour.” The lands of Gornellas and Orbanella, “for the good of the souls of his relatives,” by Alphonso IX, King of Leon, in 1181.

In the year 1202, Sancho VII, King of Navarre, gave a revenue of forty-eight pieces of gold for lighting the chapel of Notre Dame. In 1208, Savaric, Prince of Mauleon, a great captain and famous troubadour, gave as a pure and perpetual alms, to the Blessed Mary of Rocamadour, his land of Lisleau, with absolute exemption from all tax and charge. Pope Clement V., in 1314, left a legacy to the same church, “to keep up perpetually a lighted wax candle honorably in a vase or dish or silver, in the chapel of the Blessed Virgin Mary of Rocamadour, to honor this Blessed Virgin, and obtain the deliverance of his soul.” 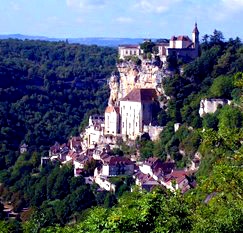 It would be too long to cite the other benefactors of the chapel of Mary; the whole extent of this blessed rock shone with votive offerings of gold, pearls, and precious stones. Spanish princesses had worked its rich hangings with their own hands, and fourteen lamps of massive silver, the twisted chains of which formed a magnificent network, lighted up Our Lady of Rocamadour night and day.

By a contrast not found anywhere but in Christendom, the altar of the Madonna was of wood, as it was in the time of Saint Amadour, and the miraculous image was a little statue of dark oak, very rudely carved. A remarkable object in the roof of the chapel, in a belfry, surrounded by brilliant windows of painted glass, was a small bell without any rope, which sounded by itself whenever it pleased the Star of the Sea to manifest her power in favor of vessels in distress which called upon her amidst the solitudes of the ocean.

The Virgin of Quercy was a prey too precious to escape from Protestantism. On the 3rd of September, 1592, Duras took possession of Rocamadour. The crosses were broken, the images disfigured, the rich vestments burned and torn up into shreds, the bells melted down, and the body of Saint Amadour, smashed with the stroked of the hammer, was profanely cast into the flames. The atheists of 1793 put the seal to these devastations.

At the present time, the towers of the city are buried beneath the turf; shrubs are growing on the ruins of the citadel; tufts of grass spring up between the disjointed stones of the magnificent flight of two hundred and seventy-eight steps, which leads from the city to the airy sanctuary of Mary. The guitar of the cantadours of Languedoc no longer celebrates the miracles of Our Lady of Rocamadour, and the night wind alone whistles in that antique chapel, where the organ has been removed for the sake of economy. The Blessed Virgin of Rocamadour might now call herself the Virgin of Ruins, and yet she still works miracles.

Return to Marian Calendar September from Our Lady of Rocamadour

Return to Titles of Mary from Our Lady of Rocamadour

Return to Roman Catholic Saints Home Page from Our Lady of Rocamadour
[?]Subscribe To This Site