Our Lady of Prompt Succor

Our Lady of Prompt Succor

For almost two hundred years the Ursuline nuns of New Orleans, Louisiana, have owned and venerated a golden, miraculous statue of Our Lady under the title, Our Lady of Prompt Succor. This lovely statue, which today stands above the high altar of the Votive Shrine or chapel, was brought from France by a humble and holy Ursuline Sister in fulfillment of a vow.

At the outbreak of the French Revolution, and Ursuline nun, Madame St. Michel Gensoul (Frances Agatha Gensoul), was obliged to leave her convent in France, return to the world and wait the time when convents would be reopened. Meanwhile she received a letter from a relative in the Ursulline Convent in New Orleans (Mother St. Andre Madier), saying that sixteen other Ursulines, to excape the government of France, had come to Havana, Cuba, to open a community there. Mother St Michel decided to devote herself to spiritual labors in Louisiana, but her Bishop refused consent, since he hoped the convents of France would soon resume activity, and he told the religious that only the Pope could give her permission, and since he, the Pope was a prisoner of Napoleon, the entire project was out of the question.

Following an impulse, Mother St. Michel wrote to the Pope and then turning for aid to Our Blessed Mother, she prayed: “O most Holy Virgin Mary, if you obtain for me a prompt and favorable answer to this letter, I promise to have you honored at New Orleans under the title of Our Lady of Prompt Succor.”

The letter was sent from Montpellier to Rome on March 19, 1809, and despite all things to the contrary, Pope Pius replied on April 29, 1809. The request had been obtained thru the prompt aid of Our Lady. In thanksgiving, Mother St. Michel ordered sculptured a beautiful statue of Our Lady holding the Infant Jesus in her arms, Our Lady of Prompt Succor. In this statue, Jesus holds in His Hands a globe, representing the world. Bishop Fournier, recognizing in all this the acts of Divine Providence, asked permission to bless the statue.

Mother St. Michel and several postulants with the precious statue of Our Lady of Prompt Succor, arrived in New Orleans December 31, 1810. The statue was set up in the chapel of the Sisters on Ursuline St. and Mother St. Michel who taught there, lost no time in spreading devotion to Our Lady, which soon became popular.

Two signal favors showed Our Lady’s pleasure at the devotion: in 1812 a great fire broke out near the convent, which was doomed for destruction. An old lay sister placed a small statue of Our Lady of Prompt Succor on a window ledge facing the approaching flames; at the same time Mother St. Michel fell on her knees and prayed: “Our Lady of Prompt Succor, we are lost if you do not come to our aid.” The wind veered, the fire died down and the convent was saved. 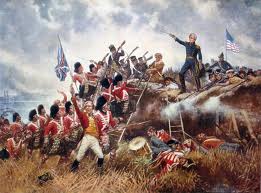 Another great favor was bestowed during the Battle of New Orleans, January 8, 1814. Never before was the city in hopelessly greater danger as the British fleet arrived at the mouth of the Mississippi River. A small American fleet had been left to defend the river, but upon encountering the British Fleet they were quickly “blown to pieces.”

Very Rev. Wm. Doubourg, urged the people to pray to Our Lady. He was not alone. The leader of the meager American forces, General Andrew Jackson, had himself warned the Ursulines and all the citizens of the approaching battle and begged their prayers for victory for his out-numbered army.

Early Sunday morning while the raging battle could be heard in the city, the convent chapel of Our Lady of Prompt Succor was crowded with petitioners, begging Mary for prompt aid. The statue was placed upon the altar and Mother Superior in the name of the community vowed if the American forces were victorious and God spared the city, the Ursulines would see that each year a Mass of Thanksgiving would be offered in honor of Our Lady of Prompt Succor.

The British had planned to attack the American defenses, which amounted to nothing more than a barricade of boards set behind a shallow moat, in the darkness just before dawn. They feared the deadly marksmanship of the American riflemen, and did not want to approach them across the field after dawn.

The British plans were unexpectedly upset, however, and they were unable to get their 20,000 men into position until after sunrise. Even so, it seemed fortune was with them, as a heavy fog worked to conceal their advance over the cane stubble of the field.

But then something strange and wonderful happened. A wind dispersed the fog just long enough for General Jackson to see the British Redcoats advancing in a straint line, should to shoulder with bayonets drawn. On their chest were white military crossbelts. Jackson gave the command to aim at the crossbelts and his men carried out his order when the enemy had marched within range of their guns.

There was a deafening explosion from the American guns and at once the front rank of the British column fell and died. The big guns of the British now went into action filling the air with smoke and noise and destruction. Jackson had lined up his men in files. When the first file had fired its guns, it withdrew to the rear to reload while the second file came forward to the wall, took aim and fired. When it had finished its deadly work, the third file advanced. Thus it went in orderly fashion with each of the volleys from the guns taking a terrible toll of the British soldiers.

The British kept advancing after each deadly volley of gunshots in a straight unbroken line. Instead of breaking ranks, crouching to the ground and firing, they continued marching forward in plain sight of the American militia who were well-protected behind the mud wall and the high boards. The white crossbelts over the scarlet coats made perfect targets for the backwoodsmen from Tennessee and Kentucky, and the British fell lifeless on top of one another under such deadly fire.

To add to their confusion and rout, those British who had been assigned to bring the scaling ladders to be used in crossing the moat and climbing the walls to the American lines forgot to bring the ladders, and while they rushed to the rear to fetch them, their men were taking a merciless pounding from American guns. British General Gibbs rushed into the lines of his men on horseback encouraging them to attack with bayonets, but the front rank of his soldiers was in retreat and there was so much confusion that he accomplished nothing. 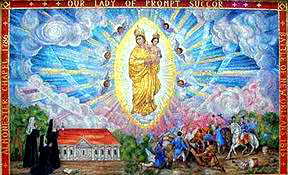 The battle lasted 25 minutes; the routed British lost 800 dead or missing from action, while Jackson lost only 7 men with an additional 6 wounded. Jackson declared only the aid of the Almighty could have brought about such results. He went himself to the convent afterwards to thank the Ursulines for their prayers and for their nursing of the American wounded.

Many favors continue to be obtained through Mary’s intercession, as records testify.

Pope Leo XIII, June 21, 1894, issued a decree of privilege to crown the famous statue, which was done Nov. 14, 1894. The two crowns: one for the infant, the other for Mary were made of “exquisite artistry” – gold, silver, precious stone, donated by hundreds of faithful clients of Our Lady. This was the first of such a ceremony conducted in the United States.

*from The Woman in Orbit and Our Lady Comes to New Orleans.

Litany of Our Lady of Prompt Succor


Return to Marian Calendar January from Our Lady of Prompt Succor

Return to Titles of Mary from Our Lady of Prompt Succor