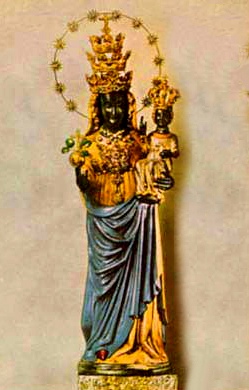 Our Lady of Oropa, near Bielle, in Savoy; this image, of cedar wood, six feet high, is in a chapel which Saint Eusebius, Bishop of Bercelli, caused to be built, about the year 380; he often retired thither during the troubles caused by the Arians.

The sanctuary of the black Virgin of Oropa, high in the Alps north of Biella, is traditionally associated with Saint Eusebius of Vercelli, who died in 371; but the circumstances of the story are anachronistic. Yet the shrine is certainly an old one, and throughout the Middle Ages was associated with a Community of Canon Regulars.

The vast range of buildings there today were begun by the dukes of Savoy, early in the seventeenth century, and form one of the most complete pilgrimage centers in the world (there is even a cinema theater). It is recorded that here in 1895, contemplating the space and beauty of the mountains, Marconi heard the first call to his life’s work.

The black painted cedar-wood statue has been crowned four times, the last time in 1920; the three superimposed diadems (the fourth is represented by a halo of twelve stars) can hardly be said to add to the beauty of the image.

Discovery of the statue of Our Lady of Oropa at Jerusalem

Saint Eusebius who had been exiled into Syria because of his differences with the Arians, died in the year 370. While in exile, the Emperor Constantine permitted him some freedom. Eusebius discovered among some ruins in Jerusalem three statues of Our Lady. On his triumphant return after the Arians had been temporarily overthrown, he gave two of the statues away. The third he kept for himself, placing it in a little hermitage at Oropa which he often visited.

In the 5th and 6th centuries when Arianism again reared its ugly head, the faithful Catholics took refuge at the shrine of Our Lady of Oropa.

At one time it was decided to transport the statue to another place. As the procession marched along, the statue became so heavy that the men who carried it could not move on. Only when they decided to take Our Lady back to her original shrine at Oropa were they able to move.

The chapel of Our Lady of Oropa is a beautiful one and thousands of pilgrims today make their way there as they have done over the centuries.

The Holy See asked the authorities in 1856 to make a list of the miracles recorded at the shrine. It is long and impressive. Then, as now, Our Lady of Oropa has a way with her Divine Son. 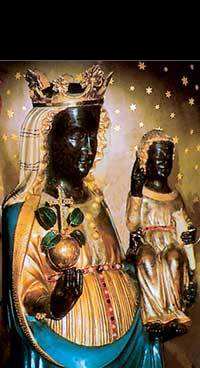 The following was submitted by Stefano Prior from Biella, Italy:

12:1 A great sign appeared in the sky, a woman clothed with the sun, with the moon under her feet, and on her head a crown of twelve stars. 2 She was with child and wailed aloud in pain as she labored to give birth....

As you can see from the image I've uploaded... Our lady of Oropa represents completely and uniquely the Woman of the Apocalypse.

She's pregnant and the Baby Jesus is already there. She is clothed with gold (sun). There is a little be more to be known about this location: Oropa is on top of the regional road number 144 and connected to another, unique, Sanctuary dedicated to the Baptist ,with a local road numbered 513 (day of Fatima).

God bless you all.

The Blessed Virgin Mary as the Woman of the Apocalypse  Not rated yet
12:1 A great sign appeared in the sky, a woman clothed with the sun, with the moon under her feet, and on her head a crown of twelve stars. 2 She was …

Return to Marian Calendar October from Our Lady of Oropa

Return to Titles of Mary from Our Lady of Oropa