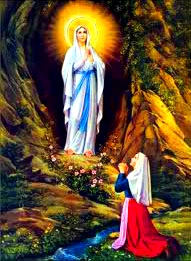 Our Lady of Lourdes

February 11: Our Lady of Lourdes


In 1858, there lived in the village of Lourdes, a little peasant girl, Bernadette Soubirous, 14 years old, uneducated, simple, poor, good. On February 11, she was sent with two more girls to collect wood. They walked to the Rock of Massabielle, where the two companions crossed a mountain stream; while Bernadette was removing her shoes to follow them she became conscious of a ravishing beautiful Lady, standing in the hollow of the rock, looking at her. Bernadette fell involuntarily upon her knees, gazing enraptured at the lovely Lady, who smiled lovingly at Bernadette and then disappeared.

The mysterious Lady from heaven appeared in all, eighteen times to the little girl and among other things told her to drink the water from a mysterious fountain which was not yet observed. Bernadette scratched in the sand at a spot indicated, and water began to trickle through the earth; after a few days there gushed forth every day 27,000 gallons of pure, clear spring water, and this water flows still.

Bernadette was asked by Our Lady of Lourdes, who always showed her a sweet heavenly courtesy, to request the priest to have a church built on the spot, that processions should be made to the grotto, that people should drink of the water. The main emphasis of her message was that the faithful should visit the grotto in order to do penance for their sins and for those of the whole world.

In answer to Bernadette’s inquiry, “Who are you?” the Lady answered, “I am the Immaculate Conception.”

The apparitions appeared for the last time on July 16, 1858. Bernadette never again had the supreme privilege of seeing and visiting with Our Lady. Later, Bernadette became a nun at Nevers and there spent the rest of her life. Through her "Lourdes was destined to become a focus of faith and mercy; thousands of souls were to flock thither to increase their piety, to borrow new energy and resolution. Suffering and charity were to join hands under the eyes of the Divine Mother. Miracles were to be never-ceasing."

Four years after, the Bishop declared upon an exhaustive and scrupulous investigation, to the faithful, that they are “justified in believing the reality of the apparitions.”

In 1873, a basilica was built on top of the rock and in 1883 another church was built below and in front of the rock. From 1867 when records began to be kept till 1908, about 5,000,000 pilgrims had visited the grotto; now about 1,000,000 people visit Lourdes every year. Although Our Lady never at any time promised that pilgrims who visited the grotto would be healed of their physical ills, remarkable cures began at once and have continued ever since. Many of them are of such a character that they can be ascribed only to supernatural power.

There is no doubt that the cures are miraculous because every possible natural cause has been proved false. There is no chemical composition in the water to make it have curative properties. It has been claimed that the cures might be due to suggestion, but Bernheim, head of the famous school of Nancy, says that although suggestion has a chance of success in certain functional diseases, it requires the cooperation of time. Suggestion cures slowly and progressively, while complete cures at Lourdes are instantaneous. the supreme life giver himself is responsible for the many cures witnessed at this shrine of the Immaculate Conception, and He chose a simple peasant to reveal to the world the love He bears all mankind as the adopted children of His Blessed Mother.

Bernadette died in 1879 at the age of 35, and was later canonized. The body of the blessed Saint can still be seen in its glass coffin, intact and incorrupt, looking as its photographs show, like a young woman asleep. The chair at which she prayed, the altar where she received her First Holy Communion, the bed in which she slept, the room in which she lived – all can be seen at Lourdes.

Lourdes is one of the greatest Marian shrines in the world. Here, praying to Our Lady of Lourdes, one may obtain refreshment, courage, energy and inspiration to continue the age-old struggle of the great Catholic Faith against the forces of darkness and disintegration. This great shrine, all its miracles, and the streams of grace that are poured into the world through Our Lady of Lourdes, were made possible through the faithfulness and the sanctity of a little peasant girl.

*from The Woman in Orbit and Mary's Book of Days

Return to Marian Calendar February from Our Lady of Lourdes

Return to Titles of Mary from Our Lady of Lourdes