Our Lady of Guadalupe Spain 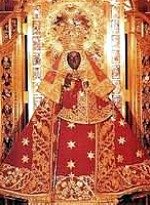 September 13: Our Lady of Guadalupe, Spain


The Marian shrine of Our Lady of Guadalupe is located in the Extremadura region of what was the Kingdom of Castile, now known as Spain. The shrine houses a Black Madonna, a statue crafted by the loving hands of Saint Luke the Evangelist himself. Our Lady of Guadalupe is a place of pilgrimage still very celebrated in Spain. F. Marian assures us that this image, Our Lady of Guadalupe, which was already famous in the fourth century, was sent by Pope Gregory the Great to Saint Leander, Bishop of Seville.

Spain was invaded by the Muslims in the year 711, who completely overwhelmed the Visigothic kingdom then in existence. The beloved statue of the Blessed Virgin was taken by the Christians who fled before the advance of the invading hordes, eventually placing the statue in a strongbox and burying it in a cave near the Asturian Mountains to keep it safe from the enemy. Those who had safeguarded the statue died, while the existence of the statue and the knowledge of its location were lost to men.

A humble, yet very capable man named Pelayo retreated to the Asturian Mountains, and soon other brave men joined him in resisting the Muslim conquerors of Spain. Pelayo was made their king, and this was the beginning of the Reconquista, or re-conquest of Spain, which took nearly 800 years to achieve. When the Reconquista was completed Spain would be a world power, once again Catholic, and Islam driven out of the Peninsula.

Our Lady of Guadalupe
Spain

In the year 1326, the Blessed Virgin appeared to a shepherd near the village of Guadalupe, asking him to have priests come to dig at the site of the apparition. When they responded, the priests found the strongbox that had been buried in the earth over 600 years previously. It contained documents that identified the cherished statue that became known as Our Lady of Guadalupe. A Marian shrine was built there in her honor.

Immediately pilgrims began to visit the shrine dedicated to Our Lady of Guadalupe, and in 1340, King Alfonso XI endowed the sanctuary over which he took a particular interest. It was in that same year that Abu Hasan of Morocco had invaded the Iberian Peninsula with a huge army, intending to march into Castile and reverse the earlier Catholic expansion into what had been Muslim territory. The battle of Rio Salado had been hard fought, though it ended in a Christian victory that King Alfonso attributed to the intercession of the Blessed Virgin, Our Lady of Guadalupe.

Forty-nine years later, Don Juan I gave the shrine into the hands of certain Hieronomite monks, adding to it the lordship of a large town which had grown up near it. The convent, which took the name of Santa Maria, is situated in the middle of the present city; and, as the times when it was founded were very insecure. It has more the appearance of a superb citadel, than of a peaceful monastery. There is an infirmary for the sick poor, a house of entertainment for strangers, two colleges, and two fine cloisters.

In 1389 the celebrated Spanish architect, Juan Alphonso, began the church, which has a nave and two aisles, and the walls of which are ornamented with magnificent votive offerings, attesting, as the Spaniards say, to more than three thousand authentic miracles of the Blessed Virgin, Our Lady of Guadalupe.

The image of the Blessed Virgin is upon the high altar, which, but a few years ago, was lighted by more than a hundred lamps of massive silver. Queen Dona Maria, wife of Don Juan II, his son, Don Enrique, and some other princes, have chosen to be buried in this church, which is decorated with excellent tapestry by Zurbaran and Jordan.

Return to Marian Calendar September from Our Lady of Guadalupe Spain

Return to Titles of Mary from Our Lady of Guadalupe Spain