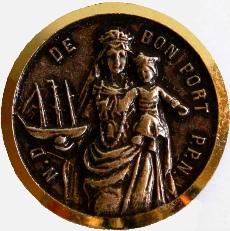 Our Lady of Good Haven

Our Lady of Good Haven

In 1838, the crew of a vessel which had just arrived at Paimpol, in France, forty-eight in number, accomplished a vow they had made in a most perilous voyage from Newfoundland.

A terrific tempest had arisen, their sails were torn, and for three days they were in continual danger of finding a watery grave. The ship began to fill with water, and all hope of safety seemed lost, when the crew, by common consent, turned their eyes to Mary, Star of the Sea, and asked for good haven. They promised if she saved them, they would visit in the most supplicant manner the church at Paimpol, where there is an image of Our Lady much venerated by the people. They had scarcely ended their prayer, when the weather became more calm and the waves began to subside.

Profiting by this providential change, they repaired their sails, and had a favorable wind till they reached the coasts of Brittany. They landed in safety at Knod, toward the decline of day, and their first act was to prostrate themselves on the ground, and give God thanks for their return.

They then intoned the Litany of the Blessed Virgin, and advanced barefooted and bare-headed along the banks and through the streets of Paimpol, to the church of the Good Haven. The people attracted in crowds by the novelty of the sight, followed them. There were parents who went to give thanks to Our Lady of Good Haven for the return of their sons, and wives to thank Mary for restoring their husbands to them. Tears streamed down every eye, and the immense multitude knelt down before the altar of that powerful Virgin, who had received from her Son power to command wind and wave.

The torches shed a dim light on the recessed of the sanctuary, where stood the image of the Blessed Virgin, Our Lady of Good Haven, whose inclined head and exteneded arms seemed to say to all, “Come to me, I am your Mother.”

These pious mariners with the most touching expression of sentiment, chanted the hymn, “Ave Maria Stella” in which they were joined in gratitude by the people.

“Bright Mother of our Maker, hail!
Thou Virgin ever blest,
The ocean’s star, by which we sail,
And gain the port of rest.”


*from The Woman in Orbit

Return to Marian Calendar February from Our Lady of Good Haven

Return to Titles of Mary from Our Lady of Good Haven

Return to Roman Catholic Saints Home Page from Our Lady of Good Haven
[?]Subscribe To This Site