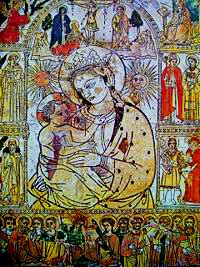 
The best-known print in early times was certainly the miraculous woodcut of Forli in northeastern Italy that became famous as Our Lady of Fire, or Our Lady of the Fire. It is the subject of the earliest monograph on a printed picture, which also fixes the earliest date that can be attached to a surviving Italian print. This book is Giuliano Bezzi’s "Il Fuoco Trionfante," printed in 1637 at Forli, between Florence and Ravenna, and he speaks of the incident remembered as Our Lady of Fire.

“Around the year of our Lord 1420, in a pleasant house by the cathedral at Forli, the devout and learned Lombardino Brussi of Ripetrosa imitated Christ among the disciples at Emmaus by breaking the bread of the fear of the Lord and of humane letters with school boys. Their household devotion turned to the Virgin. They ever began and ended their literary exercises by praising and praying to this great sovereign of the universe. They said their prayers before an image of Our Lady rudely printed from a woodblock on a paper about a foot square. Printing was then new, and who knows if this may not have been the first print by the first printmaker? The simplicity of the image certainly matched the well-mannered scholar’s simplicity of heart. It showed, and still shows, the most Blessed Virgin holding her Holy Infant and surrounded by saints like King Solomon by his guard. Above to the right and left shine the sun and the moon, luminously forecasting that the Virgin was to consecrate this paper with a power like the moon’s over water and the sun’s over fair weather.”

“The worship of the Virgin had advanced these happy boys from easy letters to graver studies when, on February 4, 1428, fire broke out in the downstairs classroom. Whether it started by accident or by design is not known, but certain it is that the outcome so glorified God and His Blessed Mother that fires nowadays cause joy where they burn! When this fire had feasted on the benches and cupboards of the school, it followed its nature to ascend and sprang at the sacred paper. In awe at the sight of the most holy image, the flames stopped and – wonder of wonders – like the blameless fingers of a loving hand, they detached it from the wall to which it was tacked. The fire thought the wall too base a support for so sublime a portrait and longed to uphold the heaven of that likeness, like the other heaven, on a blazing sphere. Above the flames raging in the closed room the unscorched image floated as on a throne. When the fire had consumed the ceiling beams it wafted out the revered leaf, not to burn but to exalt it. With this leaf on its back it flew to the second floor, to the third, to the roof, then through the roof, and behold, the Virgin’s image burst above the wondrous pyre like a phoenix, triumphant and unconsumed! The miracle drew the eyes of all the populace and came to the ears of Monsignor Domenico Capranica, the papal legate, who carried the paper in a procession, accompanied by all the people, to the cathedral of Santa Croce, where it was placed in a holy but simple chapel.”

The building burned to the ground, but the image of Our Lady of Fire was not forgotten. Copies were made of the image, and they could be found in every Christian home in the region. The original print itself was the focus and center of religious life in the town of Forli, which had been blessed to witness such a great miracle.

Return to Marian Calendar February from Our Lady of Fire

Return to Titles of Mary from Our Lady of Fire

Return to Roman Catholic Saints Homepage from Our Lady of Fire