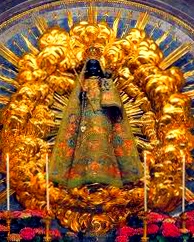 September 14: Our Lady of Einsiendeln


The monastery of Einsiedeln does not rise beneath a mild sky; its steeple, covered with snow for a great part of the year, has its outline traced upon dull clouds, in which are hidden long frosts; at its base extends a barren country, where poor harvests ripen with difficulty; the fruits are rare and insipid, and the fields are enlivened only by the lilac flower of the potato; but Our Lady delights to manifest her power there, and the rocky road of the sanctified mountain is often watered with the noblest blood of Germany; for more than one count of the empire, more than one noble German lady, make it a duty to ascend the Einsiedeln barefoot.

There still remains some little of the ancient fervor of the brave men of Frederick in old Germany. As to the Catholic population of Helvetia, nothing can equal their confidence in Our Lady of the Hermits, also known now as Our Lady of Einsiendeln, and there are few families, even in the most distant cantons, where this ancient pilgrimage is dispensed with.

Volumes have been written in Switzerland, on the miracles worked by the Madonna of Einsiedeln, Our Lady of Einsiendeln. We will select from these marvelous accounts only one fantastic legend of the seventeenth century, which we found in a very rare book of devotion, printed at Fribourg. The Swiss piously believe in the authenticity of this strange fact; the French, and anyone else, are free to disbelieve it.

In one of those immense halls of the middle ages, the walls of which were adorned with paintings in fresco, of the most frightful character, and around which were seen stone seats, which are found only in the feudal manors of Germany, some Swiss Gentlemen were seated at table, who passed round the Rhenish wine in large cups.

At the most interesting time of the German feast, and as a young officer of the name of Berthold was saying the most foolish things. A pilgrim was introduced who was going alone and barefoot to Our Lady of the Hermits. The pilgrim had been compelled to beg hospitality at the approach of a tempest which already made the great pines of a neighboring forest creak, and the waves of the lake roar.

The lord arose from his place and courteously led his new guest to the corner of a wide Gothic fireplace, where whole trunks of oak were burning. This duty fulfilled, Berthold, without any respect for the austere presence of the traveler, resumed the foolish and impious discourse which he had interrupted, now and then giving a side-look at the pilgrim to ascertain the effect produced upon him by his audacious and wicked words, but the pale and emaciated countenance of the holy man preserved the immobility of marble.

When the feast was over the guests called for their horses, to return to their several homes.

“The night is dark,” said the lord to the young miscreant, who had the honor to belong to his family. “You have to pass through a defile which is haunted by those wandering spirits who move about the world in the dark, to do mischief…I am afraid you may meet with some sad adventure; believe me, and stay here.”

“Bah!” replied the officer, laughing, who was in the service of France. “I fear neither God nor the devil!”

“Are you quite sure of that?” said the pilgrim in a tome of dark raillery, which frightened the rest.

“So sure, my good pilgrim, that I drink to Lucifer, and ask him to escort me tonight, if he is disengaged.”

“You would richly deserve it!” cried the lord of the place.

“We will pray to Our Lady of Einsiendeln for you,” said the traveler. “You will stand in need of it.”

“I will not trouble you to do so,” replied Berthold, saluting the holy man in derision.

A few minutes later Berthold was on horseback and singing the burden of a Bacchanalian song, as he descended the sloping heath which was crowned by the little fortified castle. The hour was late, the silence profound, and the solitude absolute. The moon, full and solitary, shone at times amid huge black clouds in a starless sky, and broad flashes of lightning darted across the horizon.

The young nobleman, for some cause or the other, stopped singing, but kept on swearing. At length he arrived at the dangerous place to which his relative had alluded, and which bore the name of The Devil’s Way, a name common enough in Switzerland.

It was a deep gorge, hollowed out between the red sides of two mountains, a sinister place where the Alpine goatherd would hardly have trusted himself in broad daylight. At that late hour, when the stillness and darkness made superstitions formidable, the young Swiss, uneasy at times, would keep his hand upon his sword.

Berthold was not insensitive to the feeling of dread, though he laughed aloud at his fear, ashamed at himself. “I have solemnly called upon Lucifer to serve me as a torch-bearer,” said the miscreant, who wanted to give his pride the satisfaction of a bravado; “but he turns a deaf ear…or else all hell is empty.”

The thunder rolled at a distance, and a long flash of lighting lit up the woods and mountains, letting him see two hideous dwarfs standing at his horse’s head.

“Ah!” said the officer, who felt himself growing pale. Then, resuming all his insolence, he said: “Begone, infernal crew!” Drawing and furiously brandishing his sword, he cried: “Ye two miserable dwarves! You might frighten a cowherd of the Alps!”

The Dwarves disappeared, and the galloping of two horses, who came down the almost vertical steep of the mountain, as swift as the wind, made Berthold quickly turn his head. They were two horsemen, covered with black armor, and mounted on horses of the same color. Their eyes glared like burning lamps through their visors, which were down. On their arms were hung, by a small chain of polished steel, the battle club of ancient Germany, which is a club covered with iron spikes that appeared still red with human blood; and a lurid aura of light played on their helmets.

The dark horsemen ranged themselves, in silence, on either side of the pale officer and snatched the reins from his trembling hands. A moment later and the three set off with the swiftness of the wind.

Mountains after mountains disappeared, sparks of fire were struck from the flint stones of the roads; the distance was no sooner perceived than it was swallowed up.

Soon they passed over the frail bridges of flexible branches, beneath which cataracts roar, and where the bold chamois hunter hardly dares to set his foot. Thus they reached the region of eternal snows, and the horses redoubling their furious pace, made for a gulf at the bottom of which rolled, at a depth which made one giddy, a torrent the noise of which was scarcely perceptible. 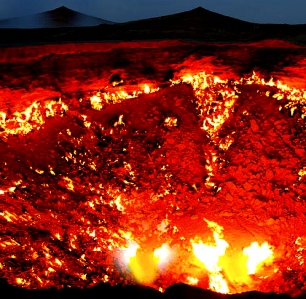 All of a sudden, from the midst of those dark waters, reddened at intervals by subterraneous fires, a multitude of hallow and hoarse voices were heard.

“Vengeance! Vengeance!” they cried. “Give up the seducer, the false friend, the duelist, to us!”

“We are bringing him!” replied the horsemen, brandishing their heavy battle-clubs. A cold sweat ran down from the forehead of Berthold; his hair stood on end with fear, and his features shrunk up with convulsions of horror – for among these accusing voices there were the well-known accents of voices which went to his very soul; remorse began to speak as loudly as fear!

“Give up to us the lawless gambler, the detractor, the blasphemer, the false swearer!” cried out the voices from the abyss.

“Bring us the impious wretch!”

“We bring him!!!” howled out the black horsemen.

Already the three travelers were close to the extreme edge of an abrupt rock, at the bottom of which was the hollow abyss which clamored so imperiously for the Helvetian nobleman. Another second and all would be over for him!

But, behold! All at once the two horsemen, in the middle of a furious gallop, suddenly became motionless, like two equestrian statues of black marble. The faint sound of a bell had just died away upon the snow-covered plain - it was the midnight office which was rung at Our Lady of Einsiedeln.

Berthold understood that the influence of the Blessed Virgin had paralyzed the terrible power which was dragging him to hell.

Hastily making the sign of the cross, Berthold recommended himself ardently and sincerely to the protecting Madonna, Our Lady of Einsiendeln, who seemed to interpose herself between him and the exemplary punishment which he acknowledged, with compunction that he had deserved.

The bell ceased, and the young officer felt a horrible palpitation of his heart when he saw the two horsemen violently moving upon their black chargers. But the voice of repentance had penetrated to the starry throne of Mary, and the phantoms, after gestures of rage and regret, precipitated themselves to the bottom of the gulf, leaving Berthold on the very edge of it.

The moon, which had quite cleared itself from the clouds which had before darkened the sky, shone like a golden lamp in the height of the firmament, and magnificently lighted up the landscape. The officer discovered, to his great surprise, that he was on one of the highest shelves of Mount Rigi, from which he had great difficulty in descending. It goes without saying that he descended Mount Rigi to the church of Our Lady of Einsiendeln a changed man.

Some days afterwards the young lord went barefoot to Our Lady of Einsiendeln to the profound astonishment of his festive companions, and made a vow, in expiation of his past conduct, that no beverage should henceforth pass his lips but the water of the spring. He edified all who met him by his new, and much more pious, conduct.

Return to Marian Calendar September from Our Lady of Einsiendeln

Return to Titles of Mary from Our Lady of Einsiendeln

Return to Roman Catholic Saints Home Page from Our Lady of Einsiendeln
[?]Subscribe To This Site