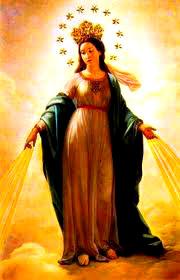 "So he arose, and took the child and his mother by night, and withdrew into Egypt, and remained there until the death of Herod; that there might be fulfilled what was spoken by the Lord through the prophet, saying, 'Out of Egypt I called my son.'" Matthew, 2:14, 15

Only one child escaped the cruel sword of Herod - Mary’s Son, safe in the arms of his Mother fleeing with Him into Egypt. How much Our Lady suffered during that long journey across the desert: anxiety, fatigue, hunger, thirst, want of shelter!

While in Egypt, Mary’s interest in the Gentiles must have greatly increased. It was not in vain that Mary and her Son were sent into Egypt; God had his reasons.

Egypt is a true picture of the Blessed Sacrament, hidden away in so many Tabernacles, surrounded by so many people who do not suspect His presence; it is noting to so many that pass by. But what is it to those who know? What was Jesus to Mary and Joseph in the land of Egypt?

He was their All – with Him exile did not exist; with Him, God’s will was easy, God’s arrangements, the best; with HIM, it was impossible to complain, impossible to have any regrets about the past or impatient wonderings about the future. Mary was absorbed in the present, because she had Jesus with Her: He had to be cared for, fed, taught, thought about, worked for, lived for – Egypt!

It was in Egypt that the Child grew, and it was there that Mary heard His first words, watched His first tottering steps, and taught Him His first (vocal) prayers. And as the Child grew, Mary grew, too, in grace and virtue; imbibing more and more of the spirit of her Son from the services she rendered Him; Making great progress in her new school, the school of the Cross; getting daily more food for meditation and prayer, enlarging her heart and preparing herself to become a second Eve – the Mother of ALL the living.

What a blessing and joy to the people of Egypt to have the Holy Family living amongst them! How this must have stirred up their zeal and courage!

Joseph knew least about it all, and yet had apparently to take the chief part and bear all the anxiety. He received the warning message from the Angel; he had to break the news to Mary that the Child’s life was in danger and that they must flee immediately – even in the middle of the night. Joseph had to take the Child and His Mother into Egypt; to anyone else but Joseph this would have seemed an unreasonable command.

Those who live close to Jesus and Mary do not criticize God’s dealings; they have only one thing to do – obey. Peace and joy will result. 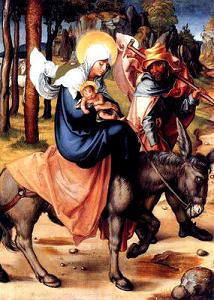 Return to Marian Calendar January from Our Lady of Egypt

Return to Titles of Mary from Our Lady of Egypt

Return to Roman Catholic Saints Homepage from Our Lady of Egypt