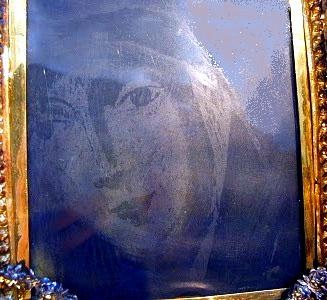 Our Lady of Clemency

The shrine is probably the only one in the world where Our Lady’s shrine is enclosed in glass. It dates from the late 18th century.

On a dark snowy day in 1797, Rosina Bucher, a young girl of the village of Absam near Innsbruck, was sitting by the window sewing in her farmhouse. It was between three and four in the afternoon and the light was just beginning to fade. Rosina looked up and saw a face in the window pane. She looked closely, not sure that she saw right, and finally called her mother.

Others, including the parish priest, were called in to observe the strange happening. All agreed that it was a face, the face of the Mother of Sorrows. It was turned slightly and there was a strange expression on it.

The window was made up of several small panes of glass quite dark in color. They removed the pane of glass with the picture on it, which was on the inside of the double window. After they had examined the glass, it was sent to experts in painting and glasswork. Here it was discovered that the face disappeared when water was put on the glass, but came back as soon as the glass was dry. They analyzed it chemically, and could not discover by what process the picture had been placed there.

Our Lady of Clemency

Rosina’s mother thought it was an omen of trouble. The parish priest, on the contrary, felt that Our Lady’s blessing must rest on the house. He asked her to let him have the picture for the Church. It can now be seen at St. Mary’s Basilica Absam, which quickly became a popular shrine and the most important site of Marian pilgrimage in the Austrian federal state of Tyrol.

Many miracles have been recorded from the pilgrims who prayed there. The church was raised to the status of a Minor Basilica in June of 2000 by Pope John Paul II due to its popularity as a site of pilgrimage.

Our Lady of Clemency of Absam is still a popular place of pilgrimage, but the most popular date is the anniversary of the discovery of the picture, January 17th. On the 17th of each month there is a celebration of the discovery of the image. The picture is quite small, the size of a small pane of glass. It is not at all pretty, and popularly known as Our Lady of Mercy and Clemency of Absam – clemency, because Mary’s heart is filled with love and kindness to those who pray at this shrine and implore her help.

Return to Marian Calendar January from Our Lady of Clemency

Return to Titles of Mary from Our Lady of Clemency

Return to Roman Catholic Saints Homepage from Our Lady of Clemency