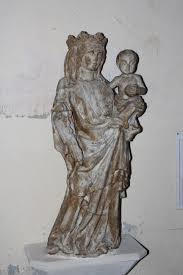 St Bernard is said to have had a great devotion to Our Lady of Chatillion-sur-Seine, because of a miracle which was wrought by the Blessed Virgin Mary in his favor.

Bernard, the third of a family of seven children, was educated with particular care, because while yet unborn, a devout man had foretold his great destiny. At the age of nine he was sent to a famous school in France at Chatillion-sur-Seine, kept by the secular priests of Saint Vorles. He was an intelligent student, greatly devoted to the Blessed Virgin. He later wrote several books about the holy Mother of God, and it is thought by many that no one speaks as sublimely of the Queen of Heaven as he does. Mary appeared to Bernard as he wrote and inspired him with heavenly words and wisdom. The most hardened sinners, heretics and agnostics Mary brought to him and she proved a bulwark to his efforts to lead men to her and to Christ, her Divine Son.

Early in his adult life Saint Bernard became sick, so sick that he was preparing himself for death. Feeling useless and barren, his infirmity and the attendant pains he experienced increased to such a degree that Bernard asked two of his brethren to go to the church and beg for heavenly relief from God.

The Blessed Virgin Mary herself soon appeared to St Bernard, entering his cell attended by St Lawrence and St Benedict. All three approached Saint Bernard and touched the parts of his body where the pain was the most severe, bringing immediate relief. St Bernard had also been troubled with an intense flow of saliva which would not cease, and that trouble was also immediately ended.

The saint was not completely cured, however, and although he did not die, it was yet some time before his health was completely restored to him. St Bernard used the time well, producing his first treatise on humility and pride, and “his light began to shine as the morning sun.”

The former abbey of Notre-Dame de Châtillon (Sancta Maria de Castellione) was an abbey located in Châtillon-sur-Seine, in the north of Burgundy, in the Côte-d'or department. This abbey of regular canons of Saint Augustine was founded in 1136 under the inspiration of Bernard of Clairvaux. The abbey survived until the year 1793 (yes, once again a victim of the enlightenment of the French Revolution). Now, only the conventual buildings and the abbey church remain.

Return to Marian Calendar January from Our Lady of Chatillion

Return to Titles of Mary from Our Lady of Chatillion

Return to Roman Catholic Saints Homepage from Our Lady of Chatillion