Our Lady of Cambray 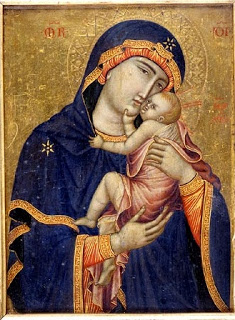 July 5: Dedication of Our Lady of Cambray, Arras, France 1472


In the year 1472, the statue in the shrine of Our Lady of Cambrai was dedicated by Peter de Ranchicourt, the Bishop of Arras. The statue at the shrine is known as Notre Dame de Grace et Cambrai, or Our Lady of Grace at Cambray, and is a famous and popular image of the Blessed Virgin. It depicts Mary standing atop a globe, with her hands down at her sides so that grace can fall from her fingertips upon her children.

There is also a miraculous icon of the Blessed Virgin holding her Divine Infant in a tender embrace. The image is said to have come to Cambray from Rome in about 1440, and it is ascribed to Saint Luke the Apostle. This icon is also known as Our Lady of Grace, and is considered the patroness of Cambray. The icon was crowned in the year 1894, and is proudly taken through the streets of Cambray in procession on the eve of the Assumption each year.

Our Lady of Cambray

This church was first built in honor of Our Lady in the year 524. This first church was reduced to ruins by the Normans in the year 882. A few years later it was rebuilt by Dossilon, twenty-first Bishop of Arras, in the year 890. After having been burnt again in the years 1064 and 1148, it was rebuilt later in the same century. During the French Revolution that church was destroyed, although the abbey church was allowed to stand because it was profaned and used as a Temple or Reason by the unreasoning. The present structure was built during the years 1696 to 1703 upon the site of the former church. This church was also damaged by fire in 1859, was restored and consecrated in 1894, and was severely damaged during World War I, and again in World War II.

The Paix des Dames, or the Women’s Peace that ended the war between Spain and France in the year 1529, was signed at Cambray on the 5th of August. The cathedral is now a national monument. As at so many of her shrines, Our Lady of Cambray here also bestowed graces and favors and miraculous answers to prayers upon her devotees.

Return to Marian Calendar July from Our Lady of Cambray

Return to Titles of Mary from Our Lady of Cambray

Return to Roman Catholic Saints Home Page from Our Lady of Cambray
[?]Subscribe To This Site