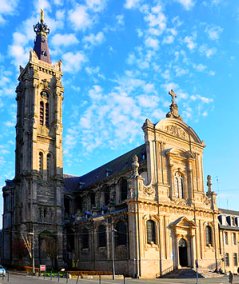 Our Lady of Bourbourg


Jean Froissart, born in the 1330s, was a man devoted to literature. His famous Chronicles was aimed at a knightly and aristocratic audience, and was devoted to "the honorable enterprises, noble adventures, and deeds of arms, performed in the wars between England and France...to the end that brave men taking example from them may be encouraged in their well-doing." His history is one of the most important sources for the first half of the Hundred Years' War, and certain events of the era, such as the battles of Crecy and Poitiers and the English Peasant Revolt of 1381. He was also an eyewitness to the miracles of Our Lady of Bourbourg that occurred in the year 1383.

“When the king of France came before Bourbourg there were never seen such fine men at arms nor such numbers as he had with him. The lords and their men were all drawn up, and eager for the attack. Those who had reconnoitered the place said it could not hold out long. The Bretons, Burgundians, Normans, Germans, and others, who knew there was much wealth in the place, which, if taken by storm, would probably fall to their share, began to skirmish with the infantry at the barriers, without waiting for orders from the constable or marshals of the army.

This skirmish increased so much that the French set fire to the town by means of fire-arrows and cannons, so that such a flame and smoke came from the houses of Bourbourg as might have been seen forty leagues off. Many gallant deeds were done, and the assailants leaped cheerfully into the mud of the ditches above the knees when they engaged with the English at the palisade and barriers.

The garrison defended themselves handsomely: indeed they had need of their exertions, for they knew not on which side to turn themselves. They were attacked on all parts: and the houses of the town were blazing with fire, which more confounded the English than anything else. This, however, did not throw them off their guard, nor cause them to quit their posts. Sir Matthew Redman and Sir Nicholas Drayton, with their men, in the centre of the town, endeavored to check the progress of the fire; but it was such a dry season, that the smallest spark set the houses in flames. It is certain, that if the attack had begun earlier, or had not the night come on soon, the town must have been taken by storm, but the approach of night put an end to it.

On the attack ceasing, the French retired to their quarters, to attend the sick and bury the dead. They said that on the morrow they would renew the attack, and it should be irresistible. The English were employed in repairing the palisades which had been broken, in putting all things in a good state, and in extinguishing the fires in the town. They were in a most perilous situation, being surrounded on all sides, without means of escaping by flight.

The duke of Brittany, who was on the opposite side of the town to the king, entered into negotiations with the English, aware of the peril they were in. He advised them to surrender the town, on their lives and fortunes being spared. This they were very willing to do, and they entreated the duke, through love of God, and in honor of his gentility, to undertake the business. The king of France replied, that, in God's name, he would willingly agree to a treaty. The English had been much renowned for gallantry and deeds of arms, and it was settled that the English should depart from Bourbourg and Gravelines, and carry away with them as much of their wealth as they could. Several of the Bretons, French, Normans, and Burgundians were much vexed at this treaty, for they thought of partaking of the spoils; but the king and his council had ordered it otherwise.

The whole of Tuesday they employed in shoeing their horses, and in packing up all their wealth, of which they had much, and in making preparations for their departure. On the Wednesday morning they loaded their baggage-horses and began their march, passing through the army with passports from the king. The Bretons were much exasperated when they saw them so loaded, waiting at Calais for a favorable wind to return to England.

The king of France, and all the lords of his army, with their attendants, entered Bourbourg on Thursday morning. The Bretons began to plunder it, without excepting even the church of St. John. In that church a pillager stood upon an altar with the intent of forcing out a precious stone that was in the crown of an image of Our Lady. As he reached to steal the stone, the image suddenly turned about, and the pillager in his fright fell from the altar and was instantly struck dead. This is a certain truth, for many persons were witnesses of it. Shortly afterwards, another pillager came with a similar intent of robbing the image; but all the bells began a peal without any one touching them, for no one could have rung them, the bell-ropes being drawn up and fastened.

On account of these miracles, the church was visited by large crowds. The king made a handsome present to the church, as did all the lords, so that the amount of their gifts was upwards of three thousand francs.”

Return to Marian Calendar February from Our Lady of Bourbourg

Return to Titles of Mary from Our Lady of Bourbourg

Return to Roman Catholic Saints Homepage from Our Lady of Bourbourg