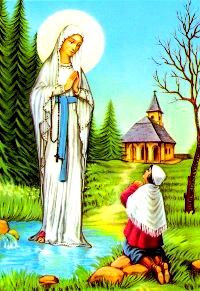 Our Lady of Banneux

Our Lady of Banneux

Little Mariette Beco, waiting for her brother to come home, pressed her face against the window while darkness fell; it was seven o’clock in Banneux. Mrs. Beco was working in a back room; the rest of the family had retired – none of them had attended Mass that Sunday morning – the father was a lapsed Catholic.

Suddenly Mariette called out, “Mother, there is a lady in the garden. It is the Holy Virgin.”

Mrs. Beco scoffed at this. Taking a rosary Marietta had found on the road, she began to pray it.

When Julien came home and heard what had happened, he said there was nothing in the garden; perhaps the icicles reflected weirdly and confused Marietta.

The pastor was informed, but he did not put much stock in the story, thinking the vision of Beauraing and Lourdes was resulting in an epidemic of visions. He sent word to Mariette to forget about it and not spread stories.

The next morning, Wednesday, the priest was surprised to see Mariette at Holy Mass – she had quit school because she failed in her First Holy Communion examination three times, and after that had not gone to church anymore. That day Marietta went to school and for the first time in her life knew her lessons well.

The next evening she went into the garden, knelt and said the rosary; her father followed her with a coat which he threw around her shoulders. He tried to get the pastor who was out, then called a neighbor, a practicing Catholic, and together they followed. The child was being beckoned on to the highway by the lady, now known as Our Lady of Banneux, till they reached a spring, into which Marietta plunged her hands at the command of the lady, who said, “This spring is set aside for me. Good night!” Then she vanished.

When they reached home, the Abbe was waiting for them. Marietta described the lady: “Her robe was long and white; she wore a blue belt and rays of light shone from her head. She was a little more than five feet tall; her right foot was bare and under it a golden rose. Her hands were raised to her breast on which was a golden heart. A rosary hung from her right arm: - all similar to the Lourdes apparition.

There were six or seven more apparitions of Our Lady of Banneux; at one of these Marietta, at the advice of the pastor asked the lady her name, to which Our Lady of Banneux replied, “I am the Virgin of the poor,” and leading the girl to a spring, said, “This spring is for all nations…for the sick…I would like a chapel built. I come to relieve suffering. Have faith in me and pray much. My dear child, pray hard…” At the end of each visit Mary would say “Au revoir,” which means, “until we meet,” but at the last visit she said, “Adieu,” which means, “good-bye.” She blessed Marietta then, at which the girl fainted. Marietta did not see the lady depart.

The Beco family and many others became model Catholics. The chapel was built, and the spring became the site of numberless cures. During the German occupation of Belgium in 1942, the bishop encouraged the cult of Our Lady of Banneux, Our Lady of the Poor.

In 1947, the bishop approved the devotion. In 1948 the cornerstone of a new basilica was laid; this was to supplant the small chapel. During the war, Marietta married a Dutch salesman. During the Battle of the Bulge in 1944, an American chaplain found them and their fifteen month old baby living in a cellar of a small home occupied by American troops.

Belgium is one more reminder in these days when communism seems to be sweeping everything before it, that our great hope – our only hope – lies in our carrying out the requests Our Lady made at Fatima and other places. Mary prays for us without ceasing, but we, too, must pray, must sacrifice. We must do our part, if we expect Mary to help us.

Return to Marian Calendar Page from Our Lady of Banneux

Return to Titles of Mary Page from Our Lady of Banneux

Return to Roman Catholic Saints Homepage from Our Lady of Banneux