Our Lady of Atocha 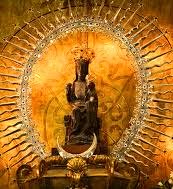 For a long time part of Madrid was nothing but a field of matreeds (tules) particularly in the district of Atocha. Here is a shrine to Our Lady of Atocha, a Spanish contraction for “Theotokos”, meaning “Mother of God,” or a simplification of “Antiocha” which in the 12th Century under this title was already ancient and beloved. Today the statue stands in a business center, a dark little Madonna with an enigmatic smile on her face. Nobody knows where she came from, but everyone from gold-braided officer to the ragged street urchins pay her the most polite respect and give her most unqualified love.

Our Lady of Atocha was in Madrid when there was only a field of reeds and a hermitage. The Moor and the Moslem came – they respected her and left her alone. When Toledo was sacked in 1170, she remained there calm and accessible, watching over her children. In 1525 Charles V brought her his bride and asked her blessing upon their marriage; Don Juan of Austria, departing for the Battle of Lepanto, knelt at her feet and pledged his sword to her; after his victory he sent in thanksgiving his sword to her along with the captured Moorish banners.

Despite all these trappings of the high and wealthy, she still remains Our Lady of all the people, beloved of kings and farmers, such as St Isidore.

Atocha is Madrid’s royal shrine: there is not a Spaniard of public importance for a thousand years who would not kneel to ask her help. Her gowns are made from the bridal gowns of queens; yet no shrine better demonstrates how little it matters where we rank in the world or what we do for a living. One of her supplicants asks her for victory for his armies, one for rain for his thirsty fields; Our Lady of Atocha answers all, impartially and lovingly.

In the year 1554 the Spanish Missionaries brought Our Lady of Atocha to Mexico with them. She was brought to a sanctuary called The Santuario De Plateros, which is a church about 30 minutes from the small town of Fresnillo.

There were many miracles that occurred after the arrival of the famous statue.

After the first miracle was reported the Infant of Atocha was separated from the rest of the statue. He was seated instead by Himself in a splendid crystal niche on the main altar, and He can still be seen there today.

In His left hand He holds a jug, which for centuries was used by pilgrims to carry their liquids for drinking. In His right hand is a small basket of food. The face of the Infant is dark and bright. He has long curls, and wears a small hat trimmed with gold and feathers on the side. His clothing is velvet, with exquisite embroidering, and has the initials JHS. .Finally, on his feet he wears solid gold sandals.

The Holy Infant is so small and attractive He is like a magnet to everyone. He is actuall a figure of admiration to the faithful. He grants them the favors they ask for, and gives grace instantly. He usually works during the night visiting the sick and the poor, therfore, He is also known as The Night Walking Infant of Atocha. It is not unusual to see HIs little chair empty while He is out on a mission. In the morning when He returns the sisters dust off His sandals after His all night journeys.

Pilgrimages are daily occurences at the Santuario De Plateros. Thousands of pilgrims go to the Santuario on their knees, singing and praying. The pilgrims come for miles away on foot carrying flowers. The children come also and the little infants are carried in the mother's shawl.

It is impossible to count the testimonials that cover the walls. Pictures, wheel chairs, crutches, braids of hair, have been brought in by those who received miraculous cures. All testimonials are framed with a picture of The Little Infant of Atocha, a picture of the moment of the miracle, and they also indicate time, date and place.

Return to Marian Calendar Page from Our Lady of Atocha

Return to Titles of Mary Page from Our Lady of Atocha