Our Lady of Abundance or Prosperity 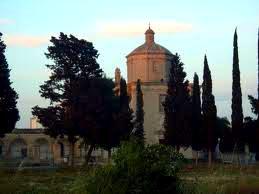 The Blessed Virgin under the above title is venerated at Cursi, Italy. The story begins in the first half of the seventeenth century. At that time the Puglie region of Italy was suffering from a severe drought. For almost three years not a drop of rain had fallen. By the spring of 1641, matters were desperate. April had arrived and the heat was as in mid-summer. Thus prospects for relief and a good harvest that year appeared dim.

Then the people of Cursi and vicinity prayed fervently to the Blessed Mother, begging her to come to their aid and save them from the famine that drew ever nearer.

The Blessed Virgin heard their plea. She appeared to a shepherd, Baglio Orlando Natali. Thoroughly frightened by the appearance of the lovely lady, he ran away.

The Mother of God called him back, reassured him gently, and told him who she was. The Queen of Heaven said that she felt compassion toward Baglio and the people of that region for the misfortune that had befallen them.

The Blessed Virgin told Baglio to go to the pastor of the parish, and tell him in her name to assemble all the people of Cursi and come back with them to that very place where she wished a Church to be erected. When it was completed she would take Cursi and the surrounding section under her protection. As a token of her deep regard, she promised Baglio that at the end of that same year there would be a harvest of such abundance as none had ever seen before. Finally, she told Baglio that he was to change his way of life, for she had selected him to be her true follower, and that he was to serve in the new Church when it would be completed. So saying she vanished as suddenly as she had appeared.

Our Lady of Abundance or Prosperity

Baglio lost no time in telling the pastor of this strange happening. The good Father gathered together the people, and led by Baglio, they all marched to the spot where the Virgin had appeared. There they fell to their knees and with one voice raised their hearts in prayers of praise and love to the Most Holy Virgin.

After some little time they reassembled and started on the return march to town. They had gone but a short distance, when a little cloud drifted into sight – then another, until the entire sky was overcast. Rain fell and drenched the whole crowd; but not one minded – in fact, all were so happy, that they laughed and shouted and played around in the downpour. It rained for three days.

The news of this happening quickly spread and great crowds hurried to the place of the apparition to offer their thanks to the Madonna. When the time of the harvest arrived, the crops in that area were so abundant that every barn was filled to overflowing.

Soon the grateful people erected a Church in honor of Holy Mary of Abundance or of Prosperity. Baglio, his old life behind him, donned the garb of a hermit and vowed to spend the rest of his life in prayer and in looking after the new shrine.

Some years later this Church was destroyed by fire resulting from a lightning stroke; but the people, recalling the goodness of the Virgin, immediately set to work and built the Present beautiful sanctuary. On the high altar there is a Greco-Byzantine fresco of the Madonna of Abundance or Prosperity – it depicts the Virgin with the Divine Infant. In their hands both hold sprigs of olives and ears of corn.

Return to Titles of Mary Page from Our Lady of Abundance