Madonna of the Rose 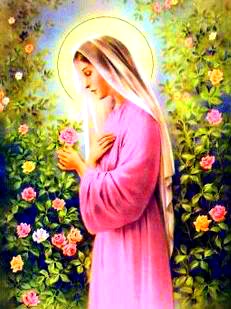 Our Lady of the Rose


History shows that the rose is the favorite flower of Our Lady herself, the Madonna of the Rose. In her apparition at Guadeloupe, she made use of roses as a sign of her presence and even arranged them with her own beautiful hands in the tilma of Juan Diego. At La Salette she wore a profusion of roses in three garlands and had tiny roses around the rim of her slippers. She brought beautiful roses with her at Lourdes, Pontmain, Pellevoisin, Beauraing, and Banneaux. To Sister Josefa Menendez she showed her immaculate heart encircled with little white roses. Truly, she could be called the Madonna of the Rose.

Mary’s wedding garment, according to approved revelation, was “richly embroidered with blue, white, violet, and gold roses.” At the Incarnation, while the Angel vanished down the path that led up to Heaven, showers of half-blown roses fell on Mary. In the city of Damascus, very familiar to Mary, hundreds of men and women earn their living by working with roses, from which they distill rosewater and extract attar and syrup of rose. These people carry the scent of roses with them wherever they go. This is a lesson for us: let us become so saturated with the virtues of Mary, the Madonna of the Rose, that we carry their fragrance and attract other souls to our Divine Lord through His Mother, the Mystical Rose, the Madonna of the Rose.

Among the many feasts of Our Lady we find mentioned in an old Latin chronicle: “January 30, Our Lady of the Rose, at Lucca in Italy. Three roses were found in January in the arms of the statue of Our Lady there.”

Cardinal Newman says “Mary is the most beautiful flower ever seen in the spiritual world. It is by the power of God’s grace that from this barren and desolate earth there ever sprung up at all flowers of holiness and glory; and Mary is the Queen of them all. She is the Queen of spiritual flowers; and therefore, is called the Rose, for the rose is called of all flowers the most beautiful. But, moreover, she is the Mystical or Hidden Rose, for mystical means hidden.”

In the stately college of King’s Chapel, in Cambridge, England, one of the most renowned universities, built by Henry VIII in memory of his father, there can be discerned, hidden in one of the Tudor rose-bosses on the walls, a small head of Our Lady which somehow escaped observation at the despoliation of images at the Protestant Deformation. Brother John, a clever carver, was hired to carve all of the roses; knowing of the king’s quarrel with the pope, he secretly carved a tiny head of Mary, half-hidden within the rose petals in the upper tier of decorations, saying, “There you remain, Our Lady of the Rose, even if wicked men try to drive you and your Son from this Church.” His words came true, when the place was stripped of every trace of Faith, the diminutive head of the Mother of God still remained.

But a rose has thorns, and so had the Mystical Rose – the sharpest for herself alone; so she could have compassion on our infirmities. Never did the breath of evil spoil the splendor of this Mystical Rose; never did God’s lovely flower, the Madonna of the Rose, cease to give forth the sweet perfume of love and praise.

“Mystical Rose, thou hast been hailed to shed they fragrance sweet, to flood our desert with thy perfume rare. We beg thee, daily kneeling at thy feet, let fall thy petals for our repose, shower upon us thy aroma, O thou Mystical Rose.”