Finding in the Temple 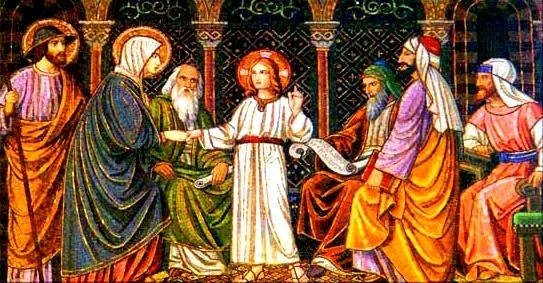 Our Lady’s Finding of the Child Jesus in the Temple

When Jesus was twelve years old, in the eyes of the Law considered a man, he attended the Temple with His parents. His parents thought He was with them in the caravan, visiting friends or relatives. Women were placed in the center of the caravan; men and boys in the front of the back to protect the women. It was not until the end of the day that Mary and Joseph sought Jesus among their relatives and could not find him. Since they could not find him, they returned to Jerusalem in an agony of heart to search for their beloved Son.

On the third day with growing anxiety, they came to God’s Temple to tell Him their sorrow and to plead for His mercy. Hardly had they returned to the Temple when they heard His voice, and God revealed to them the Child they had so diligently searched for all these worried days. Loving Mother that she is, Mary knew that her Son had good reason for his actions, but she was overcome with the pain of her emotions. Mary asked: “Son, why hast thou done so to us?” These words were forced from her by pain at the absence of her Son, Whom she loved above all things, and not by indignation, for He was blameless.

Christ was not unsympathetic to His parent’s grief. He knew what they had suffered for three days, yet he had remained in Jerusalem because of His love of prayer and communion with His Heavenly Father. He also showed them, even then, some rays of His divinity, by which to make known that He had come for the glory of His Father, and to procure our salvation. The glory of God and the salvation of our souls should be our chief object in life. So, He reminded his parents kindly that He must be about His Father’s business, and they returned to their home, and He was subject to them.

*compiled from The Woman in Orbit and The Church’s Year by Fr. Leonard Goffine

Finding in the Temple

Why did our Lord go to the temple?

"The rumor of the coming of the Redeemer and of his being already in the world, though yet unknown, had gained ground among the Jews. They were seated in their places filled with the sense of authority customary to those who are teachers and considered as learned. The Child Jesus came to the meeting of these distinguished men; and He that was the King of kings, and Lord of lords, the infinite Wisdom itself, presented Himself before the teachers of this world as an humble disciple, giving them to understand that He had come to hear the discussion and inform Himself on the question treated of, namely: whether the Messiah was already come, or, if not, concerning the time in which He should come into the world.

"The opinions of the scribes were much at variance on this question, some of them answering in the affirmative, others in the negative. those in the negative quoted some testimonies of holy Scriptures and prophecies with the coarse interpretation reprehended by the Apostle: namely, killing the spirit by the letter. They maintained that the Messiah was to come with kingly magnificence and display in order to secure the liberty of his people by the exercise of great power, rescuing them in a temporal manner from the slavery of the gentiles; yet, that there were no indications of this power and freedom in the present state of the Hebrews and no possibility of throwing off the yoke of the Romans. This outward circumstance was an argument of great force among this carnal and blinded people; for they presumed, that the coming greatness and majesty of the promised Messiah and the Redemption was intended for themselves only.

"The teacher of truth, Jesus, foresaw that the discussion would end with the confirmation of this error. As the Lord had come into the world in order to give testimony of the truth, he would not allow that the deceit and error should be confirmed and established by the authority of the learned. Therefore, the divine Child presented Himself to the disputants, manifesting the grace poured out over his lips. He stepped into their midst with exceeding majesty and grace, as one who would propose some doubt or solution. By his pleasing appearance He awakened in the hearts of these learned men a desire to hear him attentively.

"Our Lord taught with a divine efficacy, and the scribes and learned men were all dumbfounded. Convinced by his arguments that the Messiah was already living, they looked at each other in great astonishment and asked: "What miracle is this? and what prodigy of a boy! Whence has He come and who is the Child?" But though thus astonished, they did not recognize or suspect who it was, that thus taught and enlightened them concerning such an important truth. It was during this time before Jesus had finished his argument that his most holy Mother and saint Joseph her most chaste spouse arrived, just in time to hear him advance his last argument."

From the City of God by Ven. Mary of Agreda