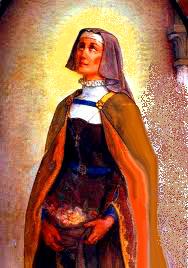 Almighty God destined this holy woman to be a special pattern for Christian wives and widows in bearing the trials and difficulties of their state. Paula was born in Brescia, in northern Italy, of a very noble family. Even in her youth she showed a special love for solitude and a quiet, devout life. Prayer and spiritual reading were her delight, and she would gladly have changed her place in the world for life in a convent. But since her parents promised her in marriage to the young count Louis Costa, lord of Benasco, Paula recognized the will of God in this arrangement and complied with the wishes of her parents.

After the wedding the count conveyed his young wife in great pomp to the castle at Benasco in the province of Piedmont. He himself was quite fond of gaiety and amusement, and would have drawn his inexperienced wife into the whirl of worldly pleasures, for in the beginning she believed it a duty to yield in everything to the tastes of her husband. But Blessed Angelo of Chiavasso, whom Blessed Paula Gambara-Costa had chosen as her confessor, kept her on the path of Christian virtue. He advised her to join the Third Order, and under his direction she learned more and more to despise the pomp and pleasure of the world. As far as possible she devoted her services to the poor, even depriving herself of food in order to bring it to the sick. One day in winter, meeting a poor woman who was obliged to walk barefoot over ice and snow, she took off her own shoes and gave them to her.

The piety of his wife and her devotion to the poor vexed the count, who had been, meanwhile, pursuing a disorderly and frivolous life. He reproached Paula severely for her conduct, ridiculed her, and treated her in a most unworthy manner even in the presence of the servants. The servants followed the example of their master; they made fun of the virtues of their mistress, and hurt her feelings on every occasion.

Blessed Paula Gambara-Costa used the saints’ way of revenging herself. Ridicule and contempt she opposed with heroic patience and the meekness of an angel. The humiliations and persecutions she had to endure, she offered up for the conversion of her husband, whose disorderly life was her heaviest cross. She also prayed fervently and performed rigorous penances for the same intention. Finally her prayer was heard.

The grace of God and Paula’s persevering virtue led the count to enter into himself. He became sincerely repentant, approved entirely of all of Paula’s good works, and even consented to let her wear the habit of the Tertiaries in public.

After his death Paula lived for God alone. She was constantly occupied with meditation and the sufferings of Christ. She waited on the poor and the sick as suffering members of Christ her Lord. She strove to resemble Our Lord in the fasts and the many austerities she practiced.

After a life full of good works and merit, Blessed Paula Gambara-Costa died in the Lord in the year 1505. God manifested her sanctity by granting numerous miraculous answers to prayers at her tomb. Pope Gregory XVI approved the devotion paid to her without interruption.