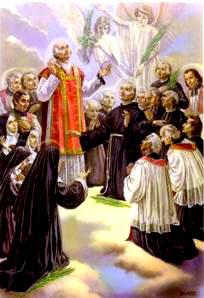 There were many Roman Catholic priests and religious who were victims of the bloody French Revolution. John Baptist Triquerie of Laval [Jean-Baptiste], was a Franciscan conventual priest. He was about 56 years old at the time of his martyrdom. There were fifteen men and four women who were martyred together by anti-Catholic French Revolutionaries in 1794. Known as the 19 Martyrs of Laval, France, 16 of these blesseds are Franciscan. The other martyrs who died with Blessed Jean-Baptiste Triquerie are: