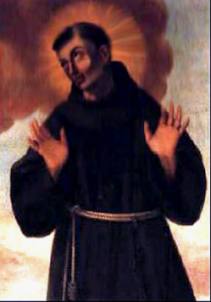 Born at Offida, a little town in the diocese of Ascoli, in 1237, Conrad grew up under the watchful care of his devout parents in innocence and a seriousness unusual in a child of his age. He entered the Franciscan Order as a youth of fourteen. As a friar he devoted himself to prayer, meditation, and the faithful observance of the rule, as well as to thorough study of the sacred sciences. Through he was destined for the priesthood, it pleased his humility to do some of the most disagreeable and wearing duties performed by the brothers.

In Blessed Peter of Treja (of Montecchio) he found a companion of similar disposition, animated with burning zeal, love of God, and unwearying desire for sanctity. The two formed a holy friendship and joined in constant imitation of their Savior and of their holy Father st Francis. In this way Conrad made such progress in perfection that some of the first disciples of St Francis who were still alive at that time, used to call him the “second St Francis.”

Like the holy Founder, Blessed Conrad of Offida was often favored with apparitions of our Lady and of the saints. Once on the feast of the Purification, when he was meditating on the significance of the feast, our Lady deigned, in the presence of his friend Peter of Treja, to place the Diving Child in his arms. He was given the grace to touch and convert the hearts of sinners by his sermons. He was also the spiritual director of the holy Tertiary, Blessed Benvenuta.

But the farther his reputation spread, the more did he seek the seclusion of solitary convents, endeavoring as much as possible, to keep aloof from the world. Sometimes he went to Mt La Verna, at other times to Pirolo. But he felt most at home in the convent in Forano, where he again met Peter of Treja and, together with him, led a truly celestial life. It was here that God granted him the gift of miracles and of prophecy.

After nearly half a century of such a life, Blessed Conrad of Offida died on December 12, 1306, while preaching the Advent sermons at Bastia near Assisi. In the year 1320 his body was transferred from Bastia to the church of the Friars Minor in Perugia, and from there in 1872, to the cathedral where it is greatly venerated by the people.

In view of the many miracles wrought at his intercession during the centuries following his death, Pope Pius VII, on April 21, 1817, confirmed the veneration paid to Blessed Conrad of Offida.