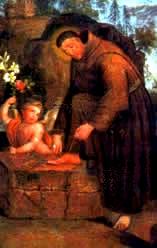 Blessed Anthony of Stroncone, scion of the ancient and noble family of the Vici, was born in the year 1381 at Stroncone, a small town in the province of Umbria. He was blessed with very devout parents, who provided their son with an excellent education. Both parents were members of the Third Order and great benefactors of the Franciscan convent at Stroncone; the Franciscan Friar John of Stroncone was the youth’s uncle.

From his earliest years, Blessed Anthony of Stroncone cherished great love for St Francis, and under the guidance of his devout parents he emulated him in his love of prayer, retirement, and mortification. Soon after his twelfth birthday, Anthony begged the superior of the Franciscan convent in his native town for admission into the order. But the superior thought it fit to defer his reception to a later time, because of the boy’s youth and delicate constitution.

Blessed Anthony of Stroncone was not to be discouraged. He repeated his pleas until the superior, who had refused him on three different occasions, relented at his tears, and gave him a postulant’s garb.

Because the boy possessed great talents, it was the intention of the superiors to educate him for the priesthood. But Anthony’s inclinations were toward a hidden life; he humbly begged to be received among the lay brothers.

When his year of probation was completed, he was sent to Fiesole, where he was thoroughly initiated in the spiritual life under the excellent guidance of his uncle John, at that time guardian of the convent there.

Later on, Father Thomas of Florence, and eminent director of souls, whom the Church has beatified, was appointed as his second master of perfection. Under his direction Anthony made such progress in virtue that the superiors assigned him, though only a lay brother, as assistant to Blessed Thomas in the education of the novices. He filled this position for three years. Because he himself was a model of all the virtues and was likewise especially inspired by God, he trained a great number of excellent religious in this time.

In the year 1428 he was sent by his superiors to the island of Corsica to assist in the establishment of new convents there. Here, too, he won the hearts of the rugged island folk by his meekness and humility, and he was highly venerated by them. After two years he was sent back to his native country to a quiet convent near Assisi. There he spent the remaining thirty years of his life in prayer, work, vigils, and fasts, a source of edification and admiration to all the brethren.

With the greatest humility and reserve he went out daily to gather alms for the convent; he was extremely happy whenever he could serve the priest at Holy Mass.

Blessed Anthony of Stroncone died on February 7, 1471, in the eightieth year of his life and his sixty-eighth as a religious. He was buried in a common grave beneath the floor of the church sanctuary at San Damiano. A year after his death, however, a flame burst forth, burning brightly on the floor, which Saint James of the March recognized as a sign from heaven. He had the floor lifted, which revealed the incorrupt body of Blessed Anthony which was exhaling a sweet perfume. His body was removed from the common vault in order to bury it in a separate tomb.

“This is a sign from God,” St James had exclaimed, but this was only the first of such signs; many others followed by way of remarkable answers to prayer, the restoration of health to the sick, and numerous other graces.

The body was examined again in 1599, and then placed in a crystal urn. After that time a new marvel was noted, as distinct knocking could be heard coming from the urn shortly before the death of a member of the community. This was heard by many people.

In 1649 a woman possessed by the devil was brought before the shrine. Blessed Anthony's body, which was reclining, sat up somewhat, with one hand raised above the other. The body, although flexible, remains in this position today.

The veneration of Blessed Anthony, which continually increased, was approved for all time by Pope Innocent XI in the year 1687. On August 21, 1809, the body of Anthony was transferred from the convent of St Damian near Assisi to its native town of Stroncone. It is still incorrupt, and the confidence of the faithful in Anthony’s powerful intercession has in no way decreased. 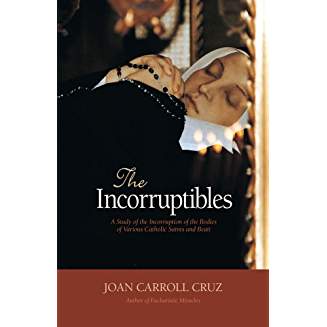 The incorruptible bodies of saints are a consoling sign of Christ's victory over death, a confirmation of the dogma of the Resurrection of the Body, a sign that the Saints are still with us in the Mystical Body of Christ, and proof of the truth of the Catholic Faith—for only in the Catholic Church do we find this phenomenon. Impr. 342 pgs 33 Illus, PB.